How to Reduce Pest Populations with Sanitation Practices

Sanitation can be an effective method of cultural control for some insect pests of pecan. The hickory shuckworm (Fig 1) is a moth that lays eggs on or near pecan nuts. These are usually easy to distinguish by a scaly white appearance (Fig 2). The eggs hatch into caterpillars that feed on the nut or husks. During the growing season more than 1 generation can develop. Before the shell hardens, the caterpillars enter the nut and feed on the young kernel. The damaged nut will usually drop to the ground. After the shell hardens, the caterpillars will bore into the husks. A sign of this feeding is black stains on the shell or husk. The hickory shuckworm overwinters in the husks on the ground. Sanitation will help control this pest in small plantings. Each fall or early spring, remove and burn all husks. This will destroy the pupating insects. During the growing season, remove and burn any immature nuts that fall and this will decrease the population.

We have gotten a lot of reports that twig girdler has been bad this year! Twig girdlers are also a pest that can be managed with good sanitation practices. The twig girdler is a small beetle that has one generation in Arkansas per growing season and can utilize many different types of trees as a host, including pecan (Fig 3). Some indicators of twig girdlers include: small branches accumulating on the ground, the presence of clean-cut twigs, and/or dangling (flagged) branch tips within a tree. The Twig girdler female chews a V-shaped groove around a small twig, girdling it (Fig 3). She then will lay an egg underneath the bark on the girdled limb (Fig 4). This portion of the limb dies quickly and will fall to the ground with the larva inside. The small larva will overwinter in the fallen twig. During the following spring, the larva resumes feeding, consuming most of the wood. As the larva grows it bores further down into the twig and fills the tunnel with wood shavings and waste. Pupation occurs in a cavity within the twig. Adults emerge in late summer and early fall. Homeowners should collect and destroy infested twigs and branches they find on the ground, beginning in the fall or early spring. This will eliminate the overwintering larvae. Infested limbs should also be pruned out and burned, if feasible.

Nearly all fruit and foliage diseases of pecans, including scab, overwinter on plant parts infected the year before. Complete removal and destruction of fallen leaves and shucks during the winter can reduce carry-over of scab and other diseases. Sanitation is a cheap environmentally friendly way to manage these pecan pests, especially for small plantings. Larger commercial plantings may require additional pest management tactics, but will benefit from good sanitation practices as well. 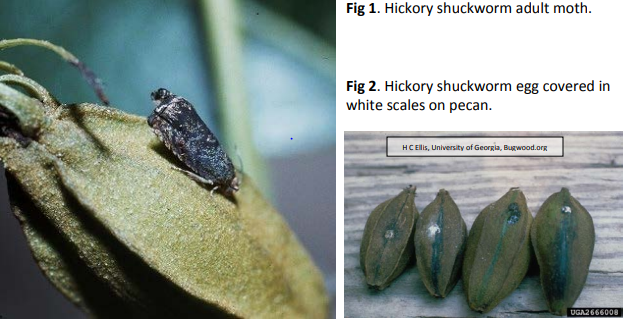