What Is Going On With My Blackberry Fruit? 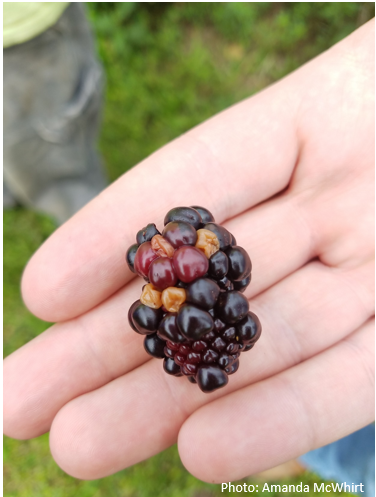 Here is a guide to help you identify what is going on with misshapen, off-color or otherwise odd looking blackberries.

But before we can talk about what causes blackberry fruit to develop odd shapes and colors, we need to discuss how blackberries form in the first place.

The word “berry” in the name blackberry is misleading as they are in fact not true berries in a botanical sense. True berries are formed from only one ovary in one flower. Blackberry flowers can have over 100 ovaries! (Oddly one example of a true berry is bananas).

Instead blackberries are what is called an aggregate fruit, and their fruit is composed of 75-85 small druplets (see diagram below). Most blackberry disorders affect the druplets in some way that the overall result in an unappealing or unedible fruit. 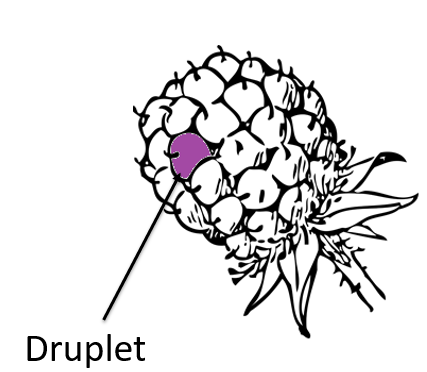 There are several different types of disorders that can affect blackberry fruit. Abiotic disorders are caused by non-living parts of the environment like temperature or weather. Living organisms like insects and disease can also cause berries to become misshapen or malformed.

I will discuss a few examples of each of these types of blackberry disorders. 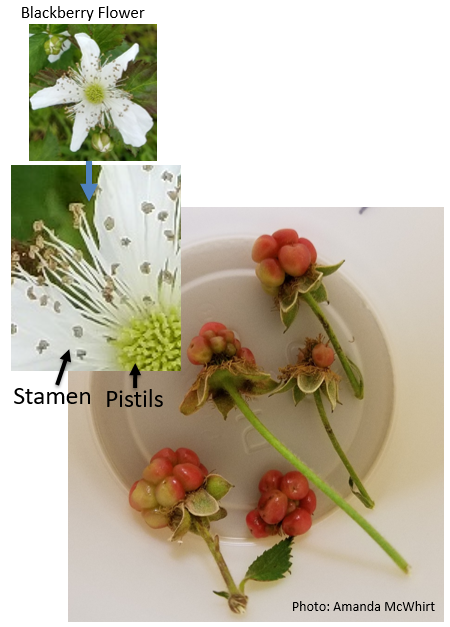 Poor druplet formation can arise due to poor pollination of flowers. Pollen is produced in the stamens of the flower and must be moved to the pistils to fertilize the ovules, which will result in the druplet. If the pistil is not fertilized no druplet will form. Blackberry flowers have 100-125 pistils of which 75-85 must be fertilized to get a good sized and shaped berry.

While blackberry flowers are self-fertile, bees are important for ensuring good pollination. Berries that have poor druplet formation are more common following cool, cloudy or wet conditions during flowering, because bees are less active in these conditions.

It is important to note that poor druplet formation can also be caused by viruses.

Viruses can be a major issue for blackberry production in the Southeast. A buildup of viruses in the crop can ultimately result in a slow decline to crop health, yields and fruit quality. The best way to avoid these issues is to start with healthy and clean plant material at crop establishment.

What is red cell regression in blackberries?

Have you ever picked some dark-black ripe blackberries on a hot day, put them in your refrigerator and returned later only to see some of the druplets had turned back to red? This reversion of druplet color after harvest or cooling is associated with rapid temperature changes in the environment or in the berry.

This phenomenon is only recently being better understood, and the exact chemical reaction is still not fully understood.

Prevention is key to managing this disorder. Ways to prevent or reduce red cell regression are: 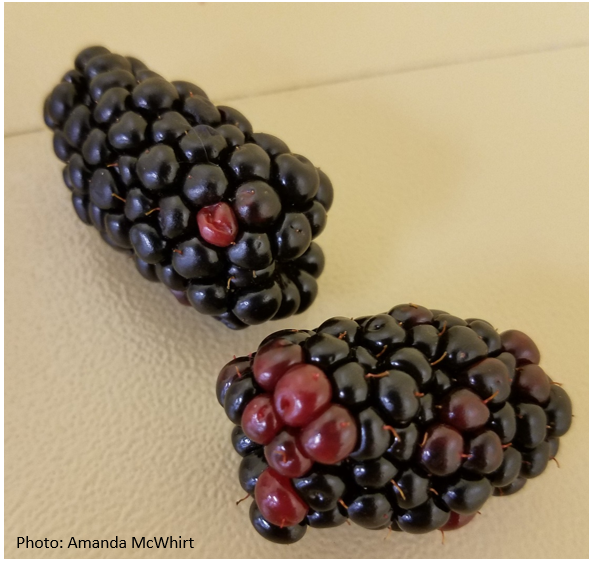 It is important to realize the fruit is still edible and no change in sugar content has been identified between normal and reverted druplets. These berries may best be marketed for jams or pies.

Consumer education may be important to managing this issue particularly with certain varieties. Some work has indicated that ‘Natchez’ may be more prone to this disorder than new releases like ‘Osage’. More work continues to be done on this topic and I will update this post as results are released.

Max Edgley out of Australia has conducted much of the recent work on this topic. Some of his results can be found here.

White druplet is associated with a drop in humidity and an increase in temperature. As this happens there is less moisture in the air to deflect solar radiation from directly contacting the berries.  This increased solar radiation is blamed on individual or groups of druplets turning first white and then later brown in color.

This disorder is often a problem early on in the season and may lessen as the season progresses.  ‘Apache’ is a variety that is more prone to this disorder.

Orienting the trellis to shade the fruit for most of the day is a method to prevent this disorder on susceptible varieties. 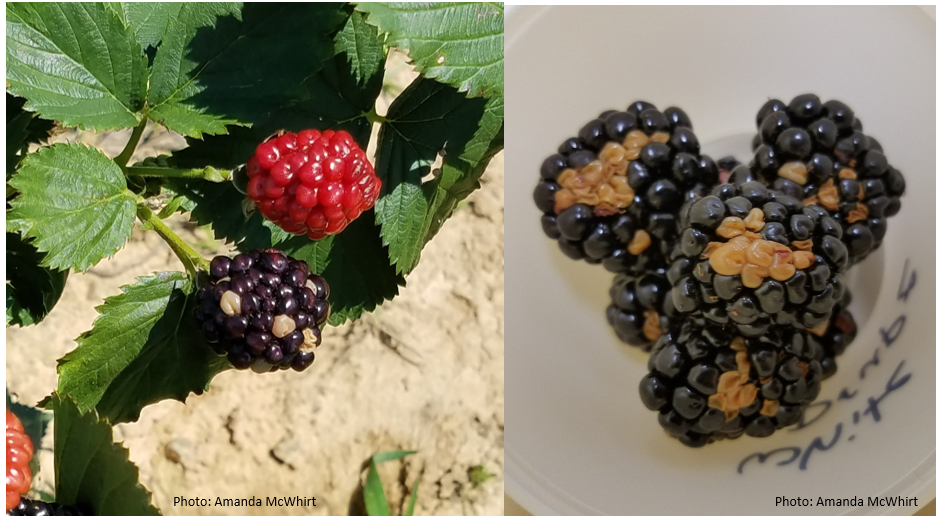 Sunburn of fruit is commonly seen when daytime temperatures exceed 90 degrees or more.  At these temperatures fruit in direct sunlight may reach temperatures that exceed the air temperature by several degrees (see here for more information). When this occurs the fruit is essentially boiled by the sun.  Symptoms include druplets that look “blanched” or “cooked”.

This disorder is often associated with white drupe and both symptoms may be present at the same time.

Prevention methods include closely picking berries every few days, encouraging good plant health so that there is sufficient leaf cover to protect berries from the sun and orienting the trellis to shade the fruit for most of the day. 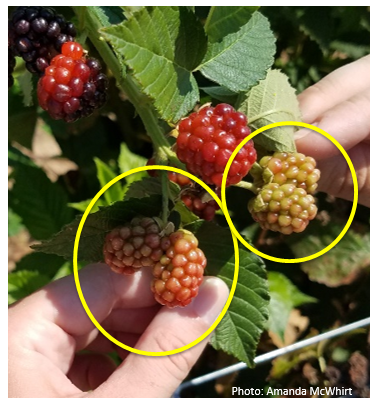 Dr. John Clark reports seeing double berry occur on primocane fruiting varieties when there are high temperatures just prior to or during flowering. This is important to remember for us here in Arkansas as our primocane fruiters generally set flowers in the heat of summer.

Spotted wing drosophila is a relatively new pest to blackberries in the SE. The first populations of these flies were found in Arkansas in 2012. The female flies lay eggs in ripening fruit which then develop into larvae. These flies are not native to the United States and differ from their fruit fly cousins in that they have a large serrated ovipositor that makes it easy for them to lay eggs in undamaged fruit that is still on the cane.

I will attach a rough video here of a SWD larvae in a blackberry fruit. This was identified because of a soft and broken druplet that was leaking that you can see on the left side of the berry. After leaving the berry in a cup for several minutes at room temperature the larvae emerged.

Dr. Jackie Lee, University of Arkansas IPM Specialist, has said this is the time (Late June/ Early July) for SWD populations to be peaking here in Arkansas. Jackie advises that one of the best cultural management practices to lessen SWD infestations is to pick berries regularly to avoid leaving fruit open to infestation in the field. Also getting berries into the cooler soon after picking can  halt larval development. These practices should be paired with a management program utilizing conventional or organic pesticides sprayed every 7-10 days. Consult the  MP-144 for a list of registered products.

Consumers and grocery stores have a zero tolerance for these larvae in fruit. 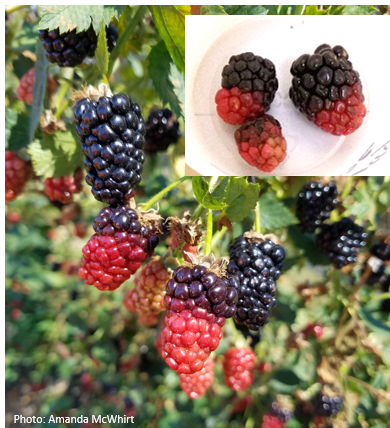 ***Suspected*** These pictures are of berries suspected to have red berry mite, it has not been confirmed

A distinct line between ripe black druplets and unripe red druplets that fail to ripen is a sign of the redberry mite (Acalitus essigi). As this mite feeds on the fruit it injects a toxin that results in the sharp contrast. This occurrence tends to be more common on late bearing blackberry varieties.

It is controlled by lime sulfur sprays during dormancy or horticultural oils in season.

Some varieties are slow to ripen and this should not be confused with mite damage. Generally this is not a major pest in AR. 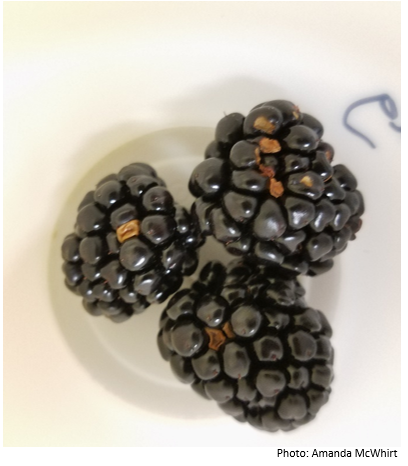 Stinkbugs feed on the fruit receptacle (the white part at the center of the fruit) and in doing so damage druplets as they insert their mouthparts. Stinkbugs may feed on green, red or black fruit.

Generally their feeding results in only localized damage to one or two druplets. A secondary type of damage can occur if the stink bug injects its "stink" into the fruit while it is feeding. This may result in a blackberry fruit that can “taste like a stink bug smells”.

Dr. Jackie Lee recommends treating for stinkbug when you see them in the nymphal stages as they are easier to control at that stage of development.

Consult the  MP-144 for a list of registered products for stink bug management.

Keep in mind the PHI (Preharvest Interval) for each product particularly during peak harvest time. 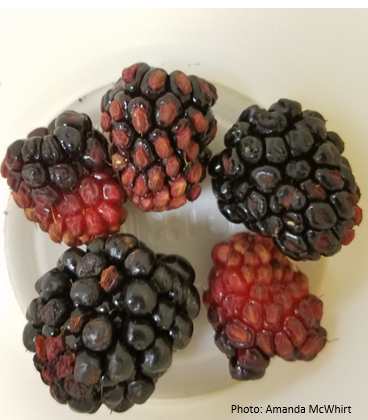 Brown crumbly, shrunken druplets are a sign of anthracnose. Anthracnose also causes silvery lesions on the floricanes and if both the berry symptoms and cane symptoms are present that is a good sign it is in fact anthracnose.

Prevention of anthracnose is key and is generally done with a lime sulfur or sulfuric sprays in winter during dormancy.

Options for control of Anthracnose during harvest include Abound and Switch are options with 0 PHI.

***Suspected*** This is another suspected issue in these pictures, not confirmed

These symptoms may be related to anthracnose, but the symptoms on this berry were hard druplets instead of more crumbly druplets typically seen on anthracnose infected berries. 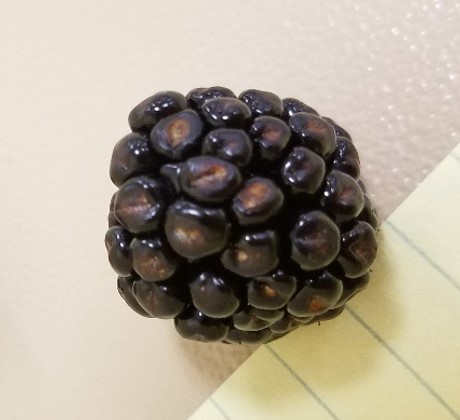 The cause of Dry cell, or Dry berry syndrome is unknown but it has been associated with the following:

The occurrence of this disorder is more common in years with heavy late spring rains. This year we have had these conditions and I have seen or heard of these symptoms from several locations in Arkansas and the surrounding area.  Treatment is usually targeted at the diseases associated with the occurrence of these symptoms as the cause is unknown.

I will end this post with a non-berry related blackberry disorder that pops up only occasionally and doesn’t cause any real damage- but is striking when it does occur.

It is called Fasciation.

Fasciation is a phenomena that is an abnormal growth of the growing point of the plant that results in the plant part affected taking on an abnormal and generally elongated shape. This disorder can affect many different types of plants. Cockscomb is a good example of the odd elongated wavy shapes that might occur and is also an example of fasciation that is inherited.

In this case fasciation on a blackberry primocane results in a flattened almost 1.5’’ wide stem.

A blackberry plant may produce this trait on only one cane in a single year and then never again.

The cause of this type of abnormal development has been attributed to environmental factors, herbicide, disease, insect feeding, virus and more. Generally it is isolated and is not contagious or prone to spread.

Fasciated canes may be removed or if curiosity strikes you they can be left to see if they develop odd shaped flowers or fruit in their fruiting year.

The example below if from a farm in NE Arkansas who reports finding at least one of these canes per year. 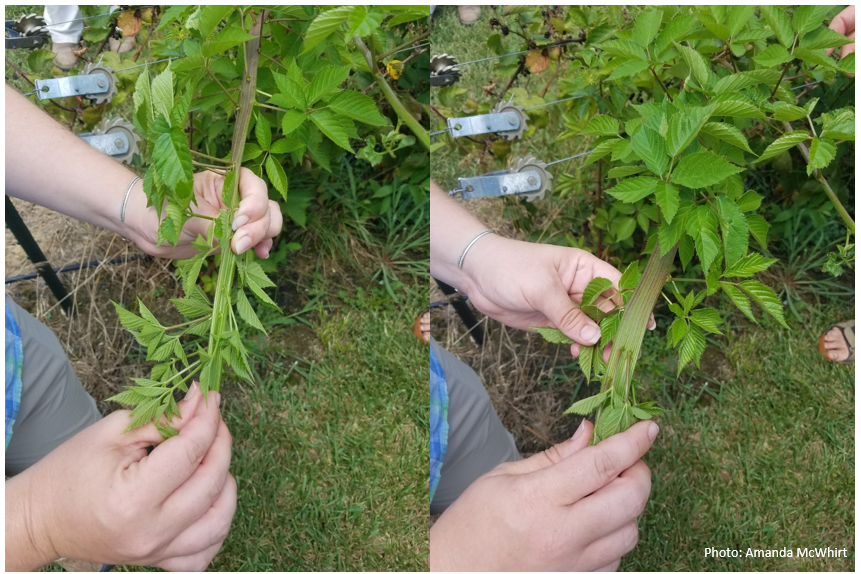