Is there a difference between male and female bell peppers?
skip to main content
Arkansas Fruit, Nut, Vegetable, and Nut Update

Is there a difference between male and female bell peppers?

Answer: No. There is no such thing as a male or female pepper fruit!

Plants don’t always follow human norms of separate male and female individuals.  Most vegetable plants have both male (pollen producing) and female (ovary) parts within the same flower on a plant. After pollination (which is when pollen is moved by wind, bees or other action to the female parts of the flower) the ovary starts to enlarge and develop into the fruit which contains the seeds (ovules). 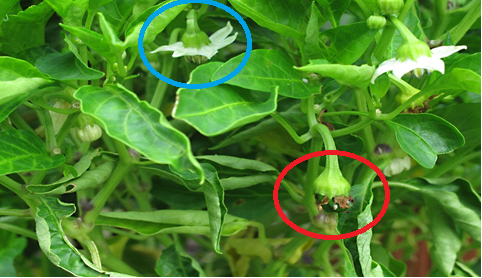 In this image you can see both pepper flowers (circled in blue at the top) and very early maturing pepper fruit (circled in red near the bottom).

This Photo by Downtowngal is licensed under CC BY-SA