The farmer’s mindset is to constantly look for ways to improve crop yield and profit while maintaining or improving soil conditions. It is because of this attitude that the interest and incorporation of cover crops has grown significantly in recent years. The University of Arkansas Cooperative Extension Service conducted a dryland (non-irrigated) winter cover crop trial in 2016 and established a watermelon crop the following spring with the goal of collecting preliminary data for farmer recommendations.

The field trial was conducted at the University of Arkansas Southwest Research and Extension Center (SWREC) in Hope, Arkansas. The cover crop mixture was comprised of the species winter rye and Austrian winter pea. Fruit yield, weed biomass production, weed species present, soil moisture accumulation, spider mite count were all evaluated. The cover crop was established on October 19, 2016 and terminated in April 2017. Watermelon seedlings were transplanted following cover crop termination on May 2, 2017. The research site was established on a fine sandy loam soil and located in Hardiness Zone 8 with an average annual rainfall of 55 inches. 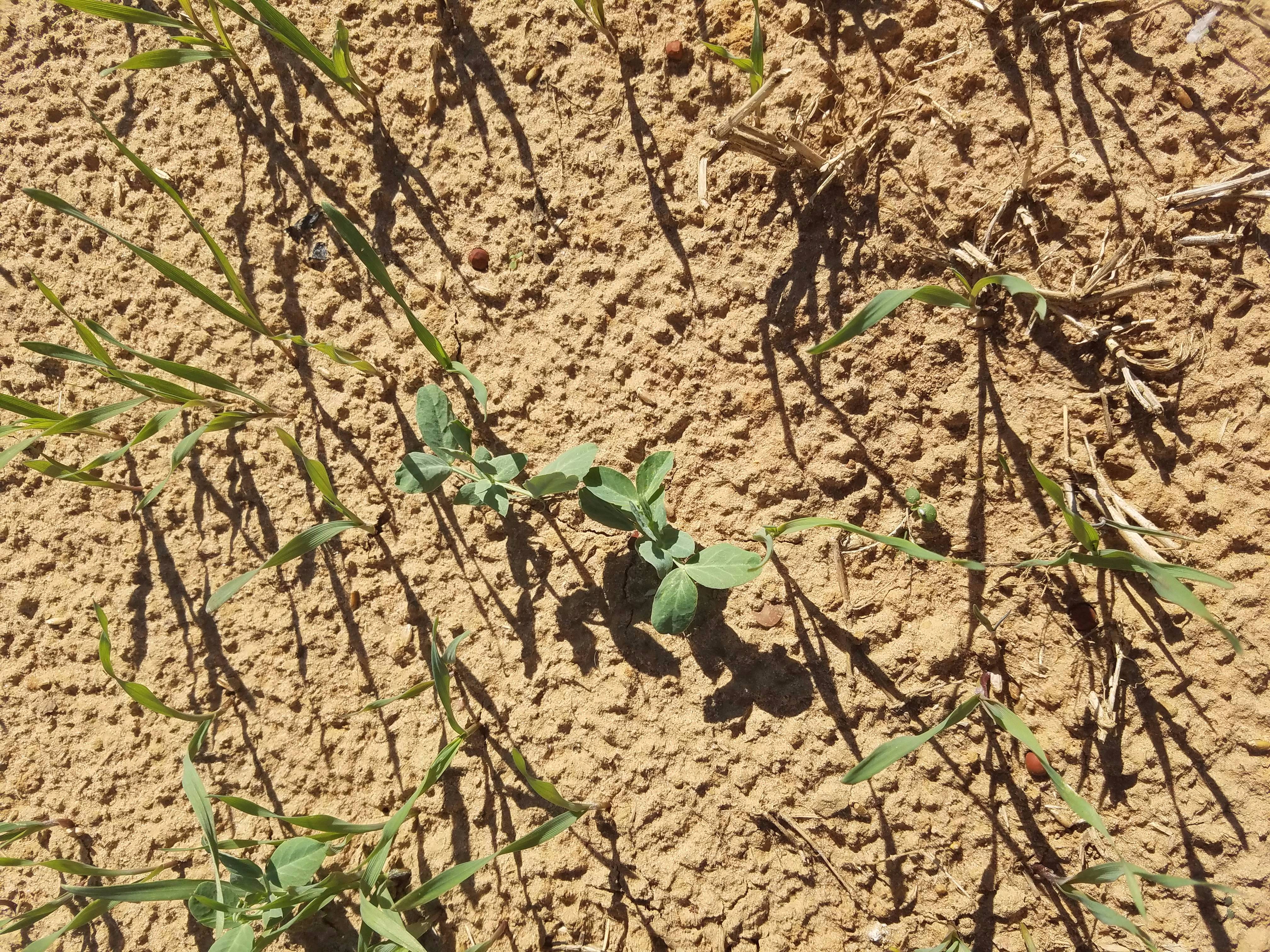 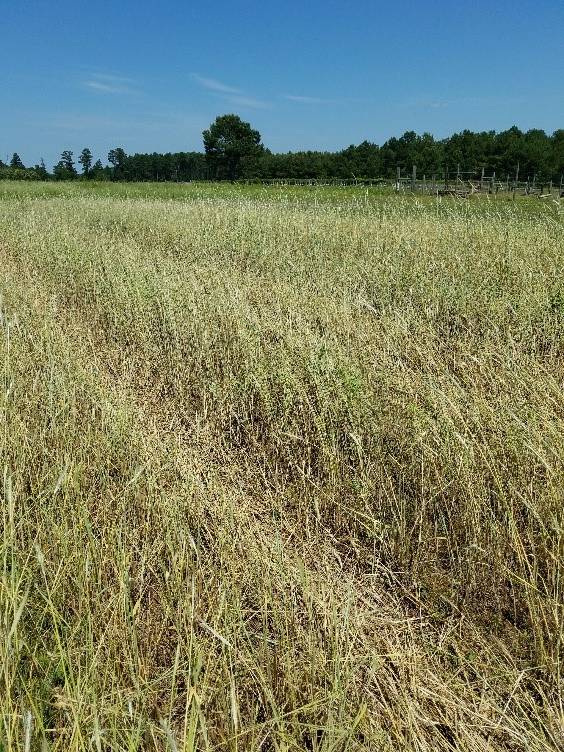 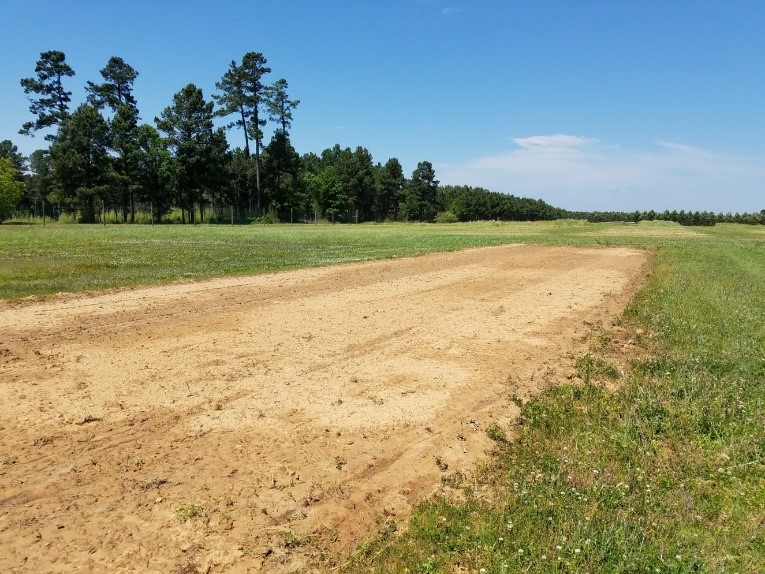 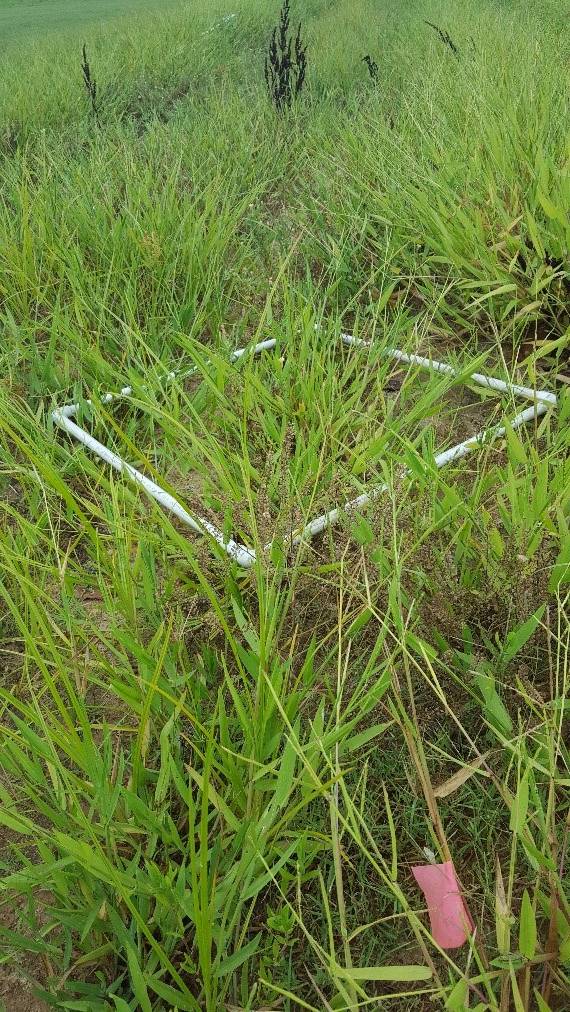 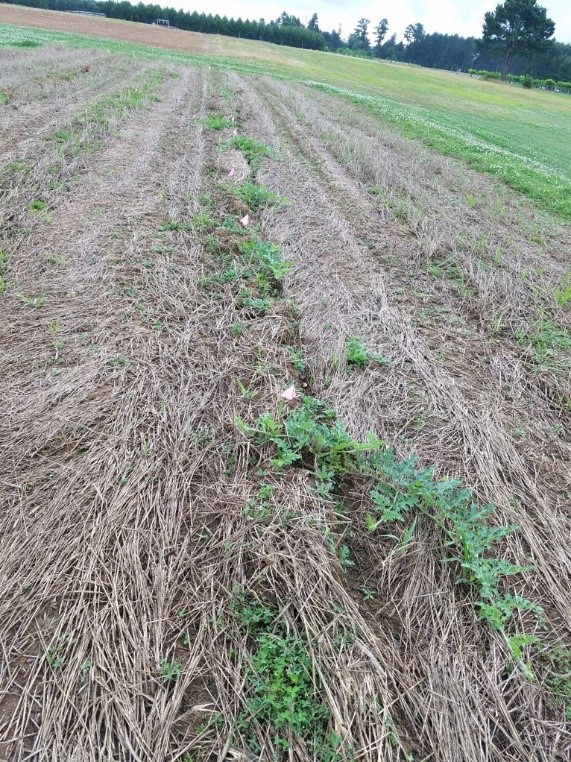 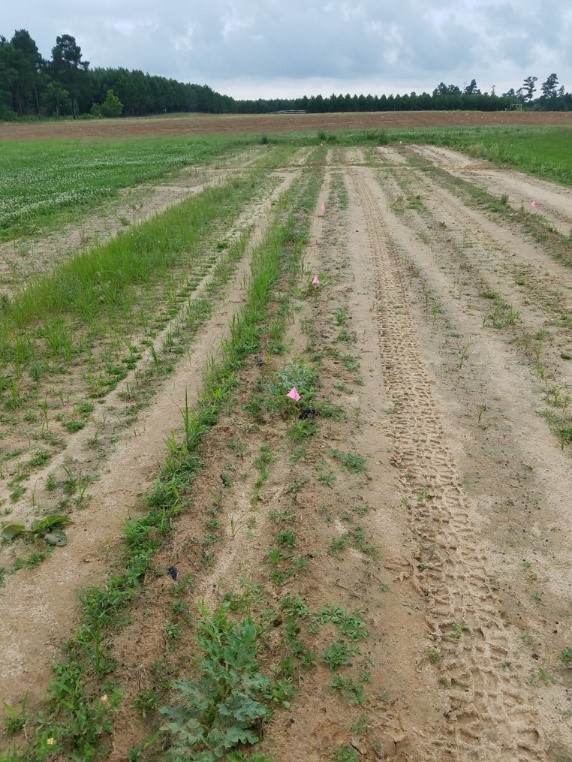 Fruit Yield Unfortunately, the lack of rain received during the watermelon fruit growing stage resulted in stunted plant growth and subsequently plant death before fruit could be harvested. A fruit count was recorded before fruit decay and no difference was observed between the cover crop and conventional treatment (10 melons per treatment). 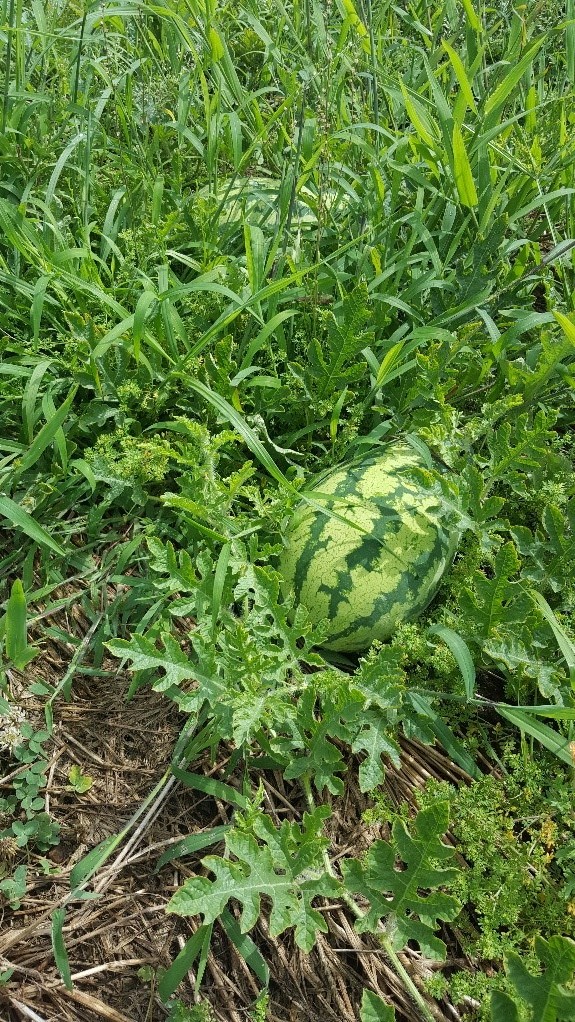 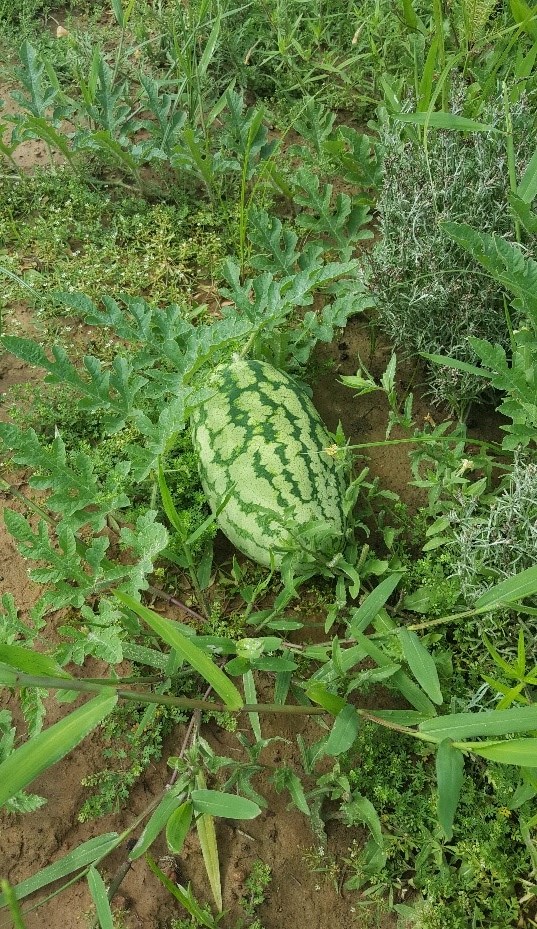 Weed biomass was sampled and species determined at three replications per treatment and dried in an oven before a net weight was recorded and the average analyzed. The results (Figure 1) displayed that the cover crop treatment had a significantly lower weed biomass (550 g/yd2) compared to that of conventional tillage (832 g/yd2). This can be seen to some degree in the pictures below where the burned down winter ryegrass in the cover crop plots can still be seen providing some soil cover well into July.  There were no differences in what types of summer weeds were found in the cover crop plot compared to the conventional plot. The types of weeds in the plots were: Carolina false dandelion, Bermuda grass, crabgrass, nutsedge and swine cress. 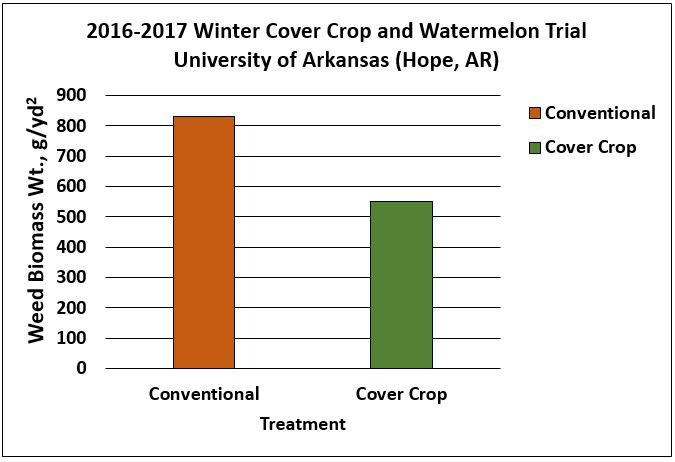 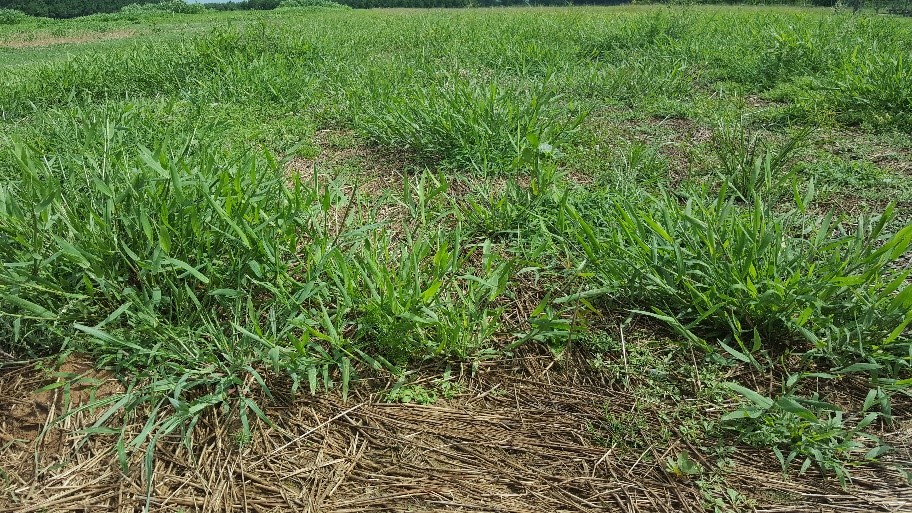 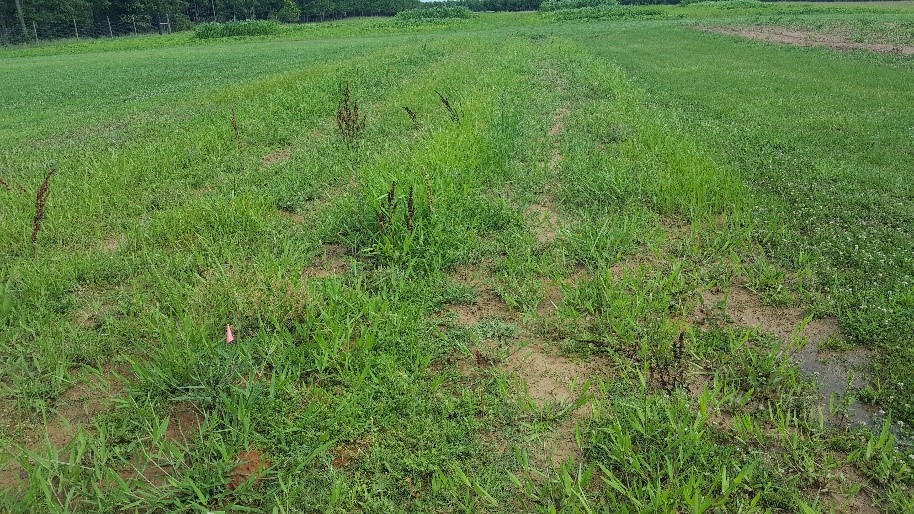 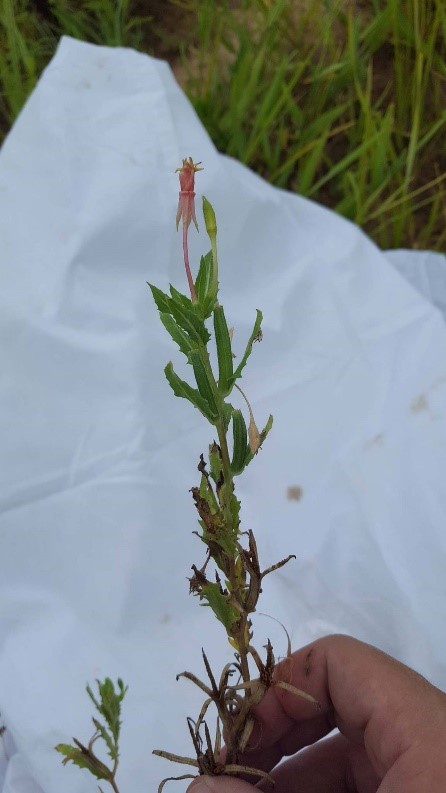 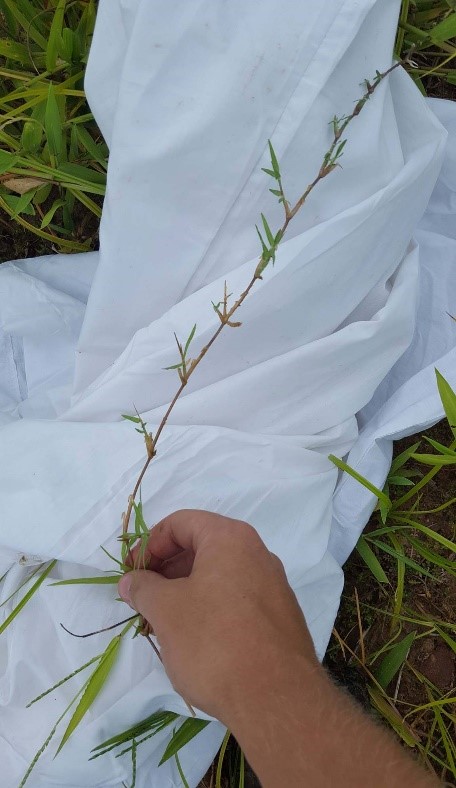 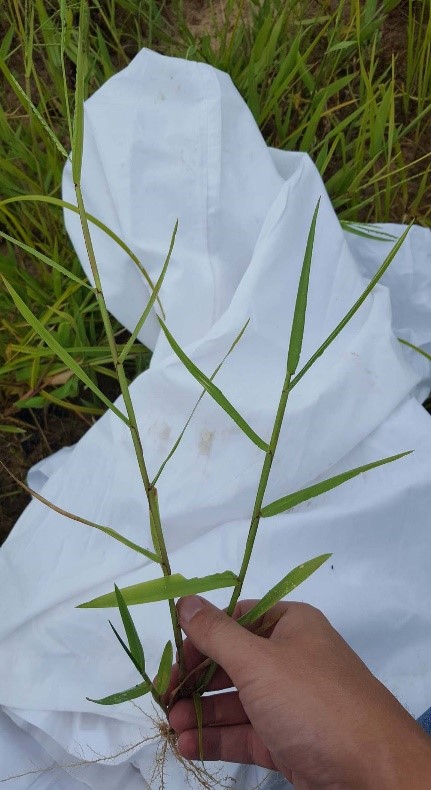 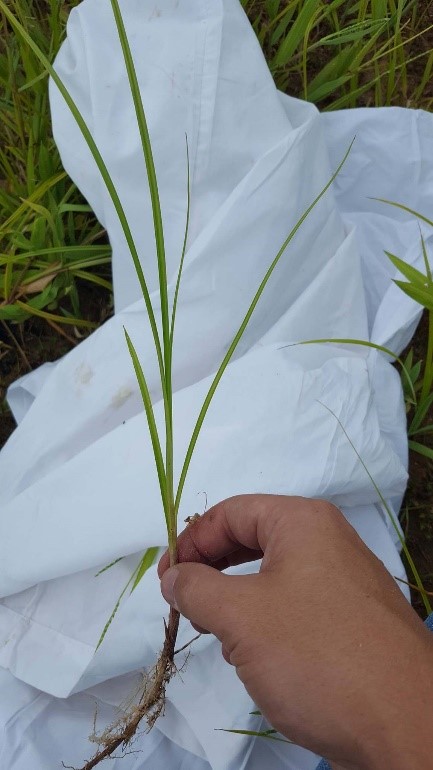 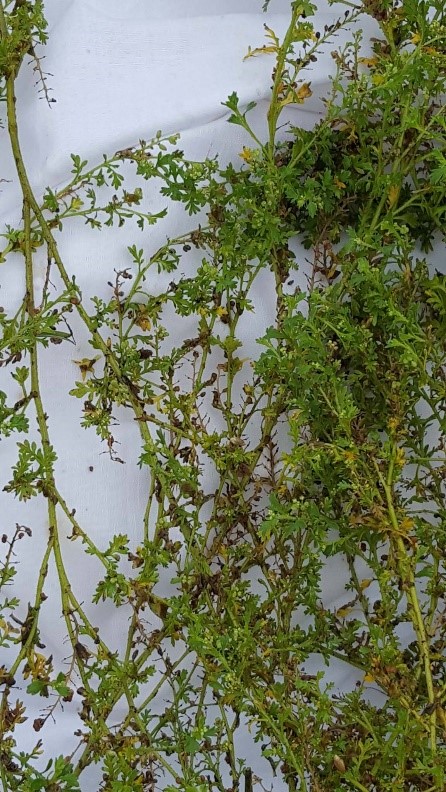 Soil moisture samples were collected with a soil push probe the same time as the weed biomass samples and dried in an oven for analysis. The samples were analyzed on a percentage basis and no differences were observed between the treatments.

Watermelon leaf samples were collected two different times during the growing season and examined for mite presence; but, none were present.

The preliminary results indicate that a winter cover crop is beneficial for weed suppression and does not deplete soil moisture content any more than the conventional method. A watermelon fruit weight could not be taken, however, the treatments contained the same fruit count, which indicates that a cover crop system could possibly maintain the same yield, while decreasing weed issues.

One consideration that should be taken is that this trial was non-irrigated and only received rainfall for its water supply. Due to this being a wet year rainfall led to good vine growth, until several weeks of hot dry weather occurred just prior to final fruit development.  It is believed that the results would be different if irrigation was supplied during the watermelon growing season and thus will be investigated in multiple locations across the state in 2017-2018.

A lack of regular irrigation likely led to some observance of blossom end rot on the watermelons. This is related to a lack of calcium in the plant that often results from irregular irrigation or fluctuations in moisture. 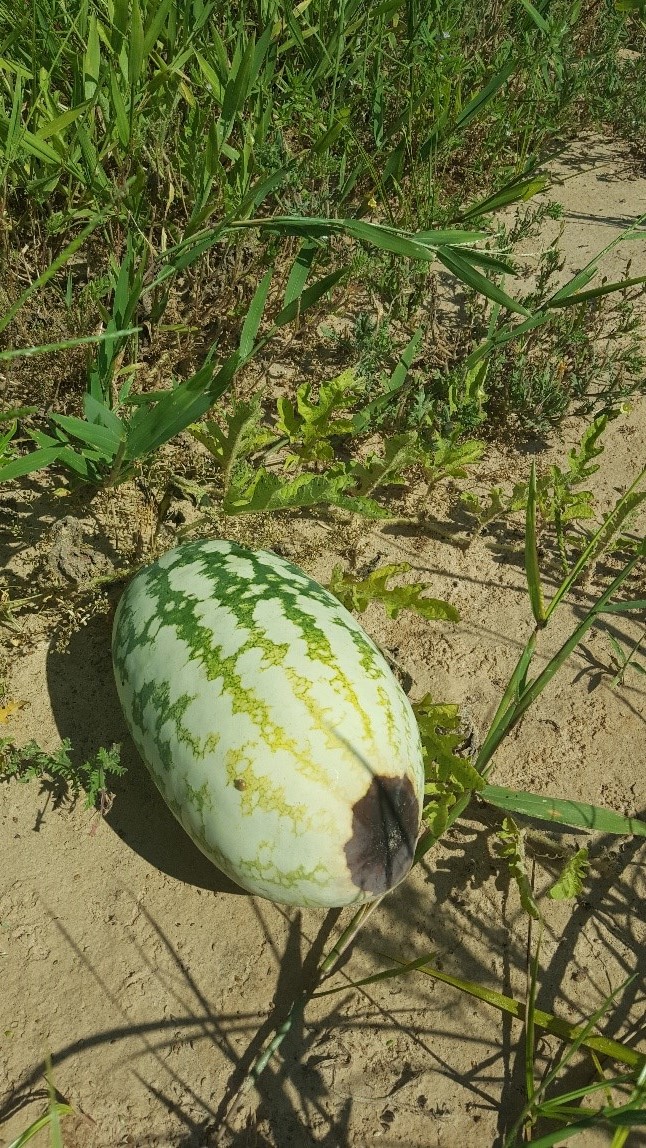 A special thank you is owed to Clay Wingfield, Mike McCorkle, and Vicki Bennett at the SWREC for their help in managing this ongoing trial.