It seems like fall is a long way off but growers will soon be placing orders for strawberry plants for fall planting.  Here are some results from our strawberry variety trial conducted in Hope Arkansas.

Over the last spring and fall we conducted a variety trial at the University of Arkansas Southwest Research and Extension Center (SWREC) in Hope, Arkansas. The trial compared 5 recently released short-day strawberry varieties to ‘Camino Real’ which is widely planted and was released in 2002. All the varieties were evaluated for yield, berry size and fruit quality as grown in both high-tunnel and field plots. The trials (field and tunnel) were planted October 6th, 2016. Hope, Arkansas is in Zone 8. Low winter temperatures reached 10 F. The trial was managed under a low pesticide input program. But was treated with fungicides and a miticide on an as needed basis. In April of this year we also conducted a taste test.

Overall there was no difference in marketable yields between the field and high-tunnel, but there was an interaction of variety with growing environment so I have separated out the two systems so you can see how the varieties performed in the hihg-tunnel and field (Figure 1).  There was also an effect of growing system on berry size, where the field had larger berry weights on average as compared to the high-tunnel (Figure 2).

The results from the study indicate ‘Fronteras’ performed the best both in the field and high-tunnel at our location with yields reaching 1.25 lbs. marketable yield per plant in the field and 1.07 lbs. marketable yield per plant in the high-tunnel (Figure 1). ‘Fronteras’ performed statistically similarly to ‘Camino Real’ in the Field for marketable yields, average berry size and culls (Figure 1, 2). ‘Fronteras’ was developed in California and did well under our conditions. This was the variety that stood out to me early on and throughout the season for its plant vigor and fruit set. It has good ratings for Phytophthora, Verticillium and Fusarium resistance and higher rankings for these diseases than ‘Camarosa’. See here for more information.

‘Flavorfest’ did not perform well at our location and suffered poor plant performance that translated to 0.33 marketable yield per plant in the field and 0.12 lbs. marketable yield per plant in the tunnel.  This was directly related to observations of very small berry size on this cultivar and average berry weights of under 6g per berry (Figure 1, 2).  Some growers report better success with this cultivar in more Northern climates. ‘Flavorfest’ was developed in Maryland and did not show good adaptability to conditions in Southern Arkansas.

‘Ruby June’, ‘Lucia’ and ‘Scarlet’ all performed similarly to each other in the field, but yielded less than ‘Camino Real’.  In the high-tunnel however ‘Lucia’ performed as well as ‘Fronteras’ and had fewer culls. ‘Lucia’ may be a variety to try for high-tunnel production, however see the taste-test data section for a note on its appearance.

‘Fronteras’ was a notably vigorous plant a few weeks after planting, but also produced a large number of fall runners (Figure 3) both in the tunnel and field that were removed. The number of runners were counted and removed at two dates (10/31/16 and 11/14/16). This is an important consideration when considering this variety due to potential increases in fall labor required for runner removal.

Plant canopy diameter was also measured as the plants were beginning to flower in the tunnel and the plants were still dormant in the field (2/22/17). Canopy diameter was used to estimate plant vigor as there were noticeable differences between ‘Flavorfest’ which remained stunted in the tunnel throughout the trial and ‘Fronteras’ and ‘Scarlet’ both of which produced large plants. 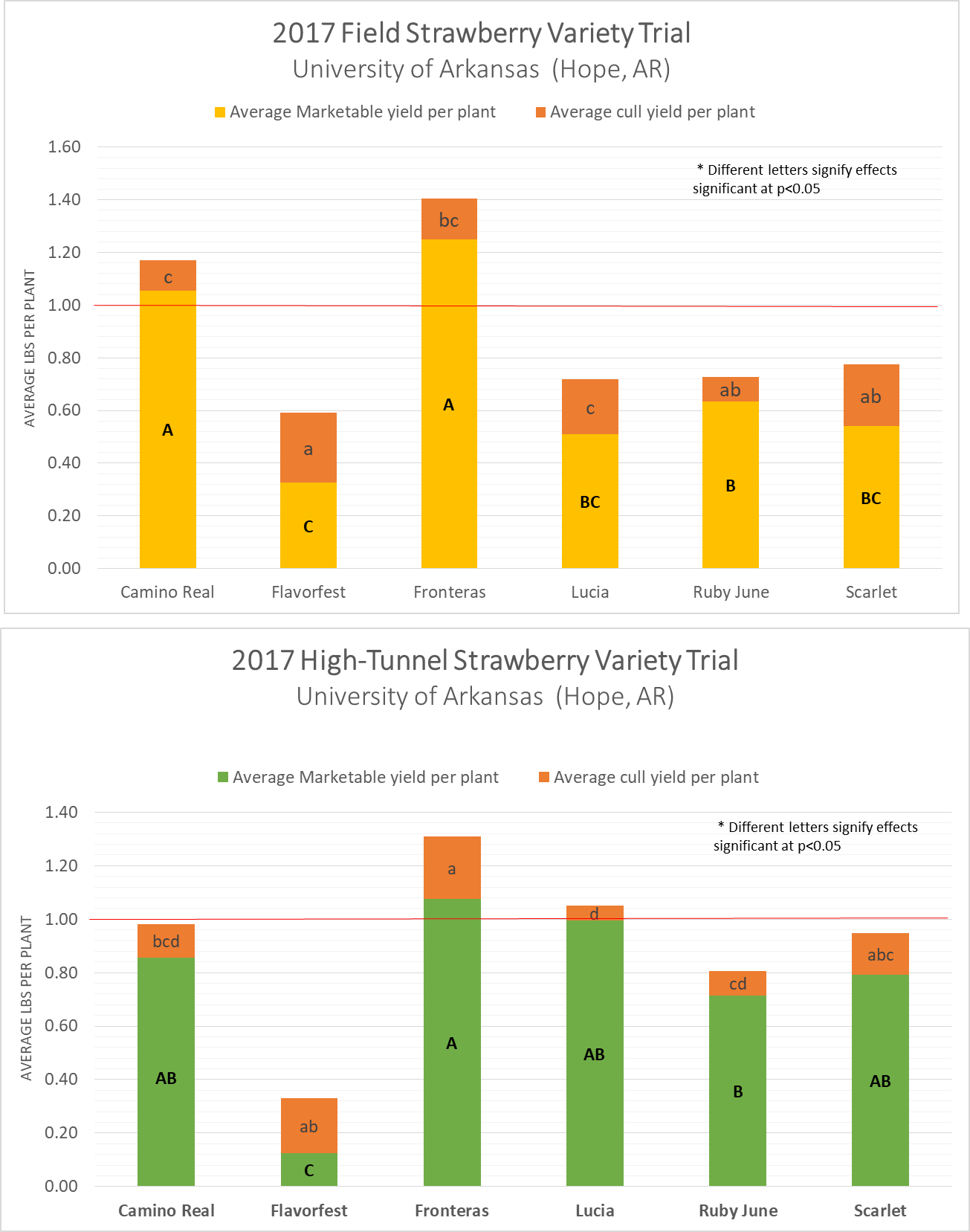 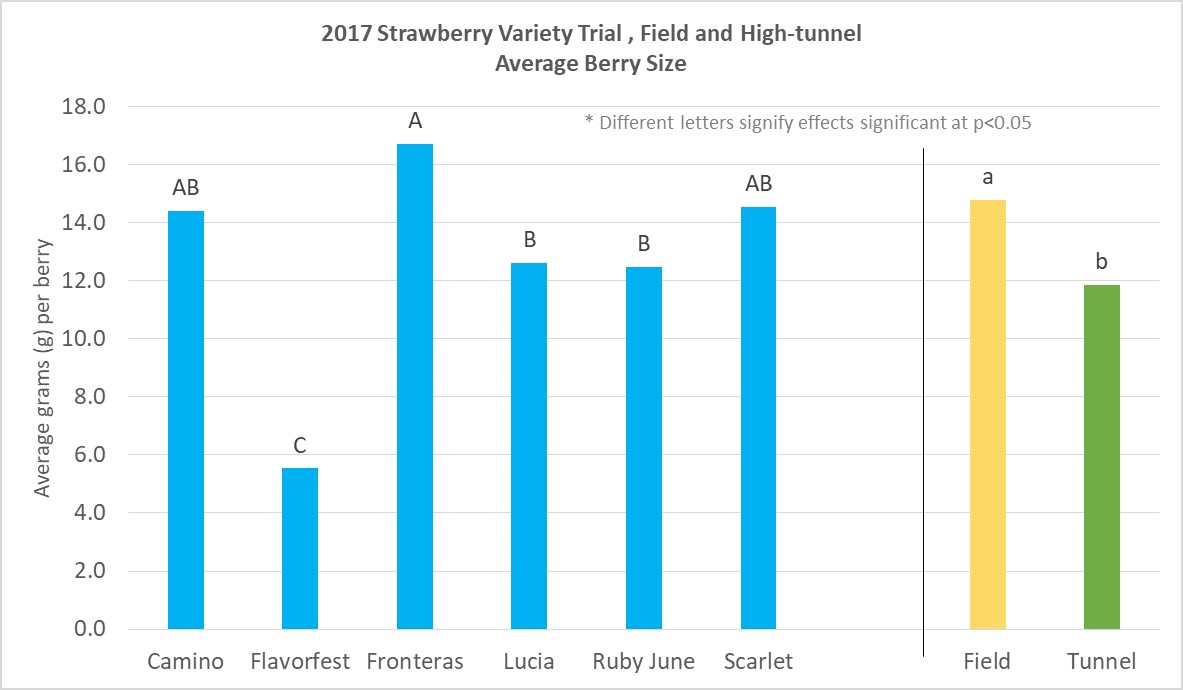 *High-tunnel vs. field had an impact on berry size where berries were bigger in the field. 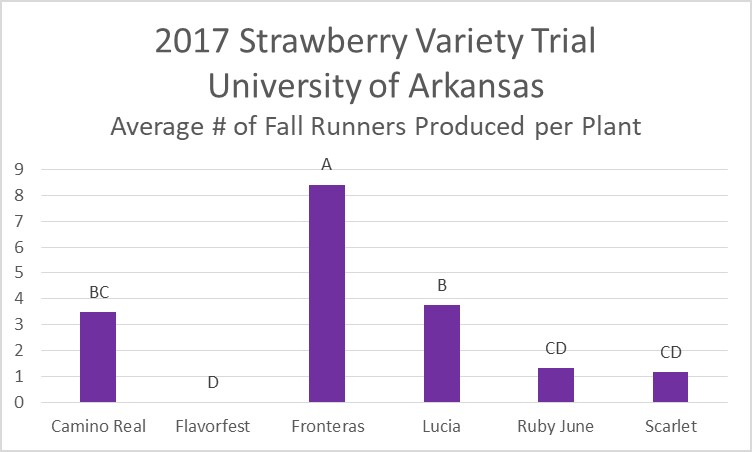 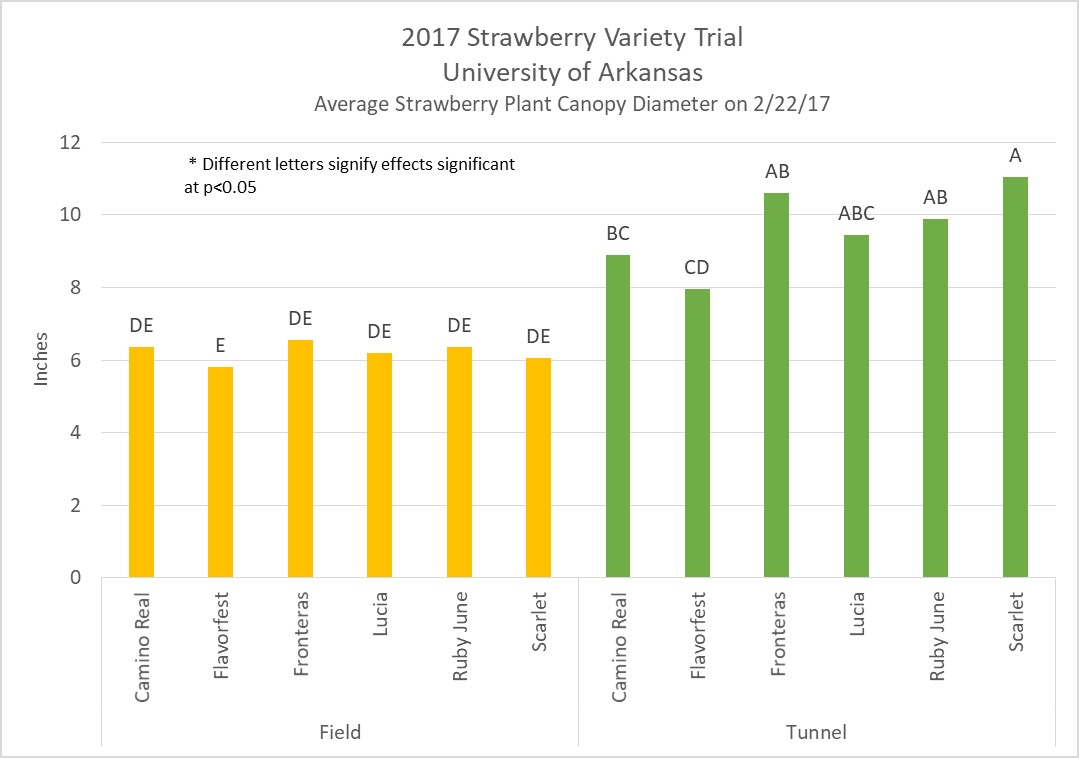 Before I discuss the results of the taste test, I would like to outline the conditions under which it was conducted. We had 30 participants, the large majority of which were women between the ages of 31-65. I will say that overall the day we conducted the test in mid -April was a "bad flavor day". The ‘Chandler’ berries we used were also 1 day older than the other varieties which had all been picked the night before. The ‘Chandler’ berries were from a different research project being conducted at the SWREC, but were not a part of our main trial.

Overall ‘Fronteras’ and ‘Ruby June’ lead the pack for new varieties in terms of “Overall Appearance”, “Overall Impression”, and “Overall Strawberry Flavor” where a rating of 1 indicated a more favorable attribute than a rating of 5. ‘Ruby June’ was rated low for the participant’s impression of its berry size and clumped near the berry size rating for ‘Flavorfest’. This result does not match our yield results which indicated that on average ‘Ruby June’ had larger berries than ‘Flavorfest’.  However it is important to remember this taste test was only conducted from one day’s harvest.

‘Lucia’ was rated very low for appearance, likely due to its more elongated or “carrot” shape and orange color (see pictures at the end of the post). Participants in the taste test commented that the flavor was much better than what they expected when they first saw the berry. Due to its non-typical appearance ‘Lucia’ may require some consumer education on its qualities as consumers may not initially be drawn to its appearance but may ultimately enjoy its flavor qualities. 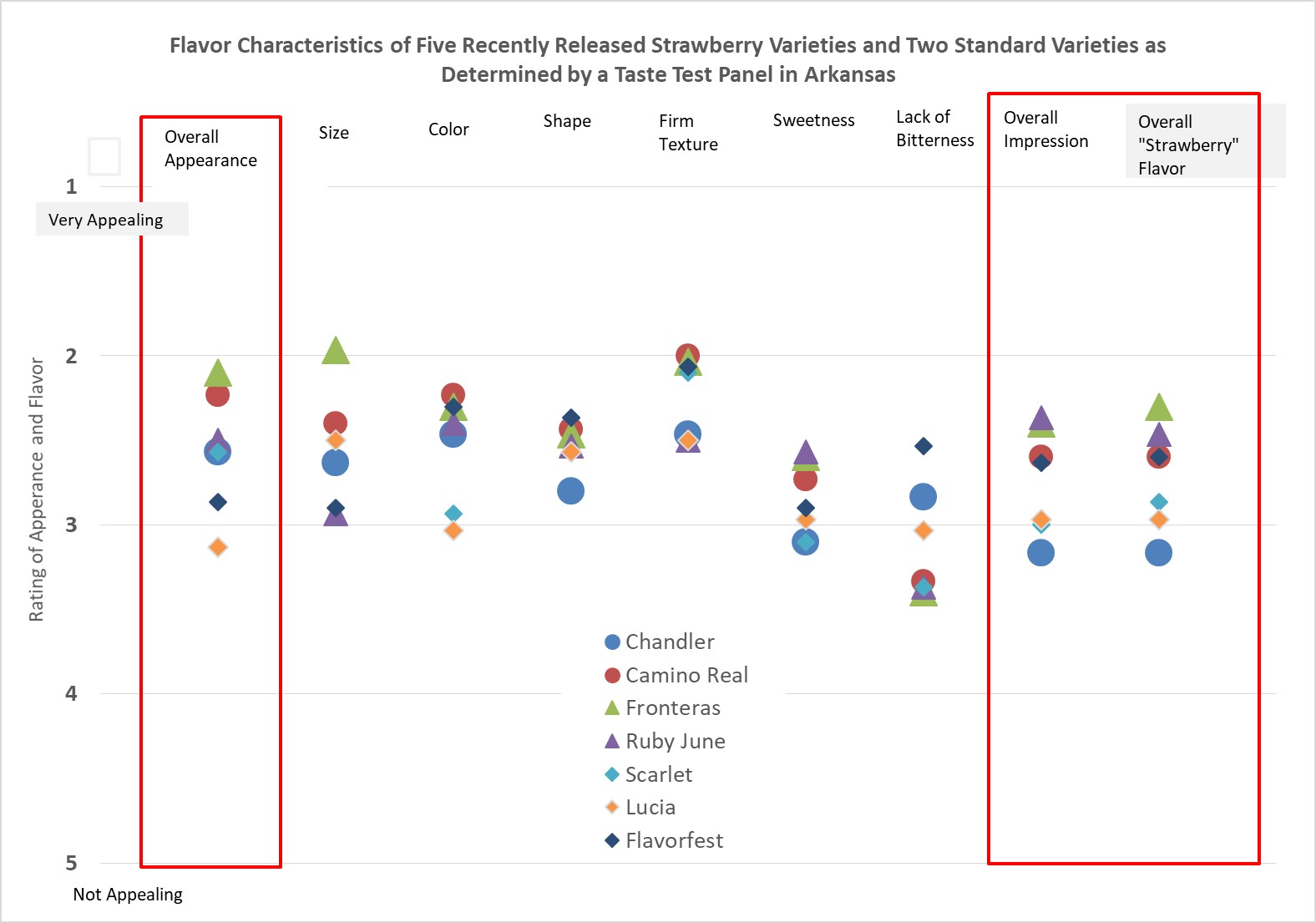 Overall ‘Fronteras’ performed well in both measures of yield and flavor. It is a variety that is still relatively new on the scene but may be worth trying for both field and high-tunnel production. ‘Lucia’ performed well in terms of yields in the tunnel, but it might require special marketing techniques for its unique and non-typical berry appearance. ‘Ruby June’ did well in the flavor tests and had moderate yields. The ‘Ruby June’ plants also retained vigor through the end of the trial, when other varieties were starting to decline.

Hope, Arkansas is warmer than many other parts of the state and this should be taken into consideration when analyzing these results and likening them to what you may experience in your location. I encourage you to try out new varieties on a small scale and to always include a diverse mix of varieties in any planting.

It is important to remember that these comments are based off of only one year’s worth of yield data and taste-test sampling from only one harvest date. The trial was also part of an on-going fertility trial. These preliminary results will be released this fall.

Special thanks to Clay Wingfield, Vicki Bennett and Mike McCorkle at the SWREC for their help in managing this trial.

Fronteras in the High-Tunnel 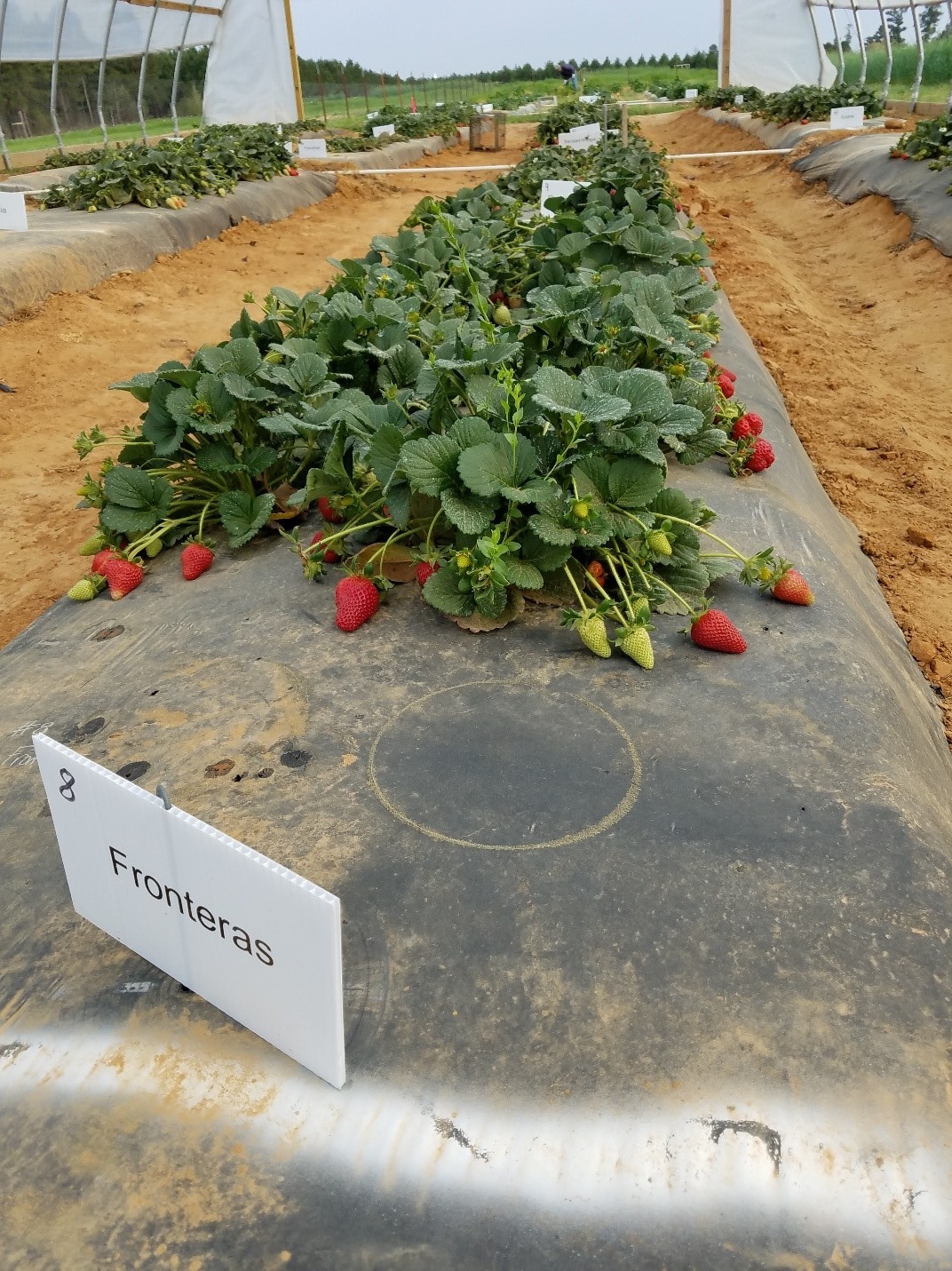 Ruby June in the High-Tunnel 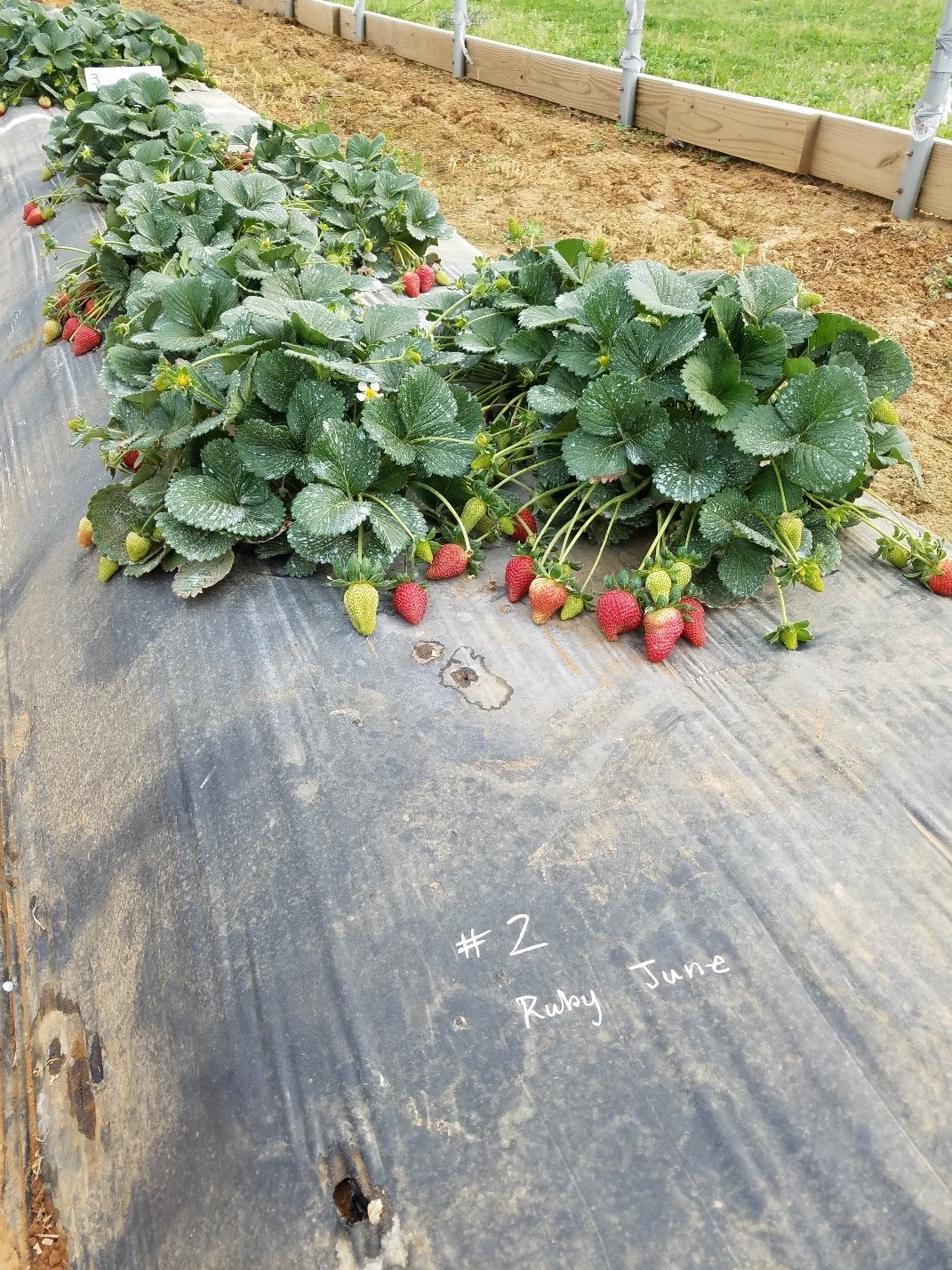 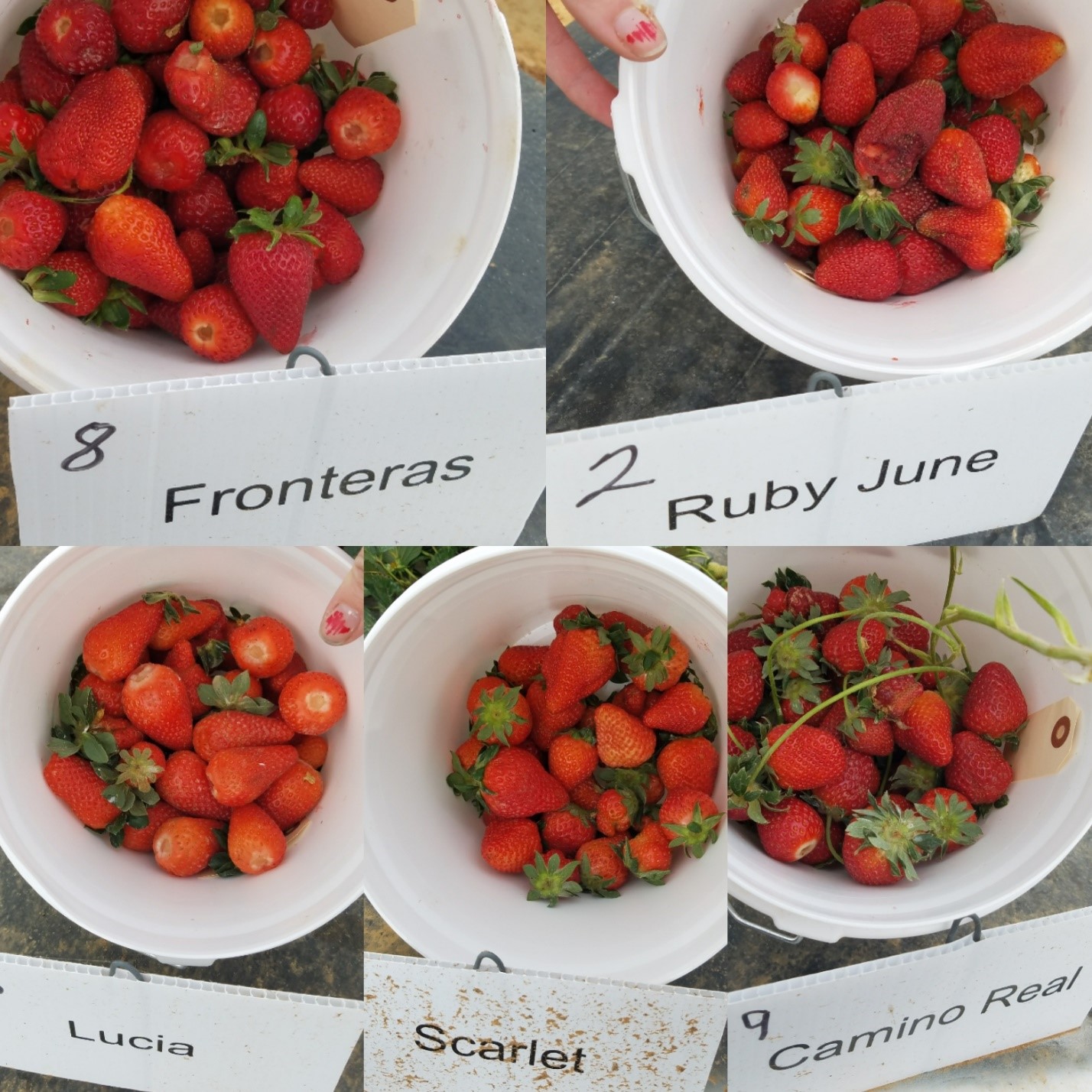