During the fall of 2020 much of the Southeastern region experienced above-average temperatures during November. These warmer than average temperatures resulted in above-average growing degree day (GDD) accumulation during that month. Average GDD accumulated in November 2020 were two to six times greater in 2020 compared with previous years (Table 1). This has resulted in higher total GDD accumulation from October to December during 2020 compared to the recent 2019 and 2018 seasons.

The potential impacts of this occurrence on strawberry crown development will vary based on location and planting date. For example, plug plants that were planted in the correct time window may have accumulated above-average GDD from October to December resulting in excessive crown development (Image 1). Cutoffs and late-planted plug plants likely benefited from increased GDD accumulation in November which has resulted in adequate crown development despite being planted later. 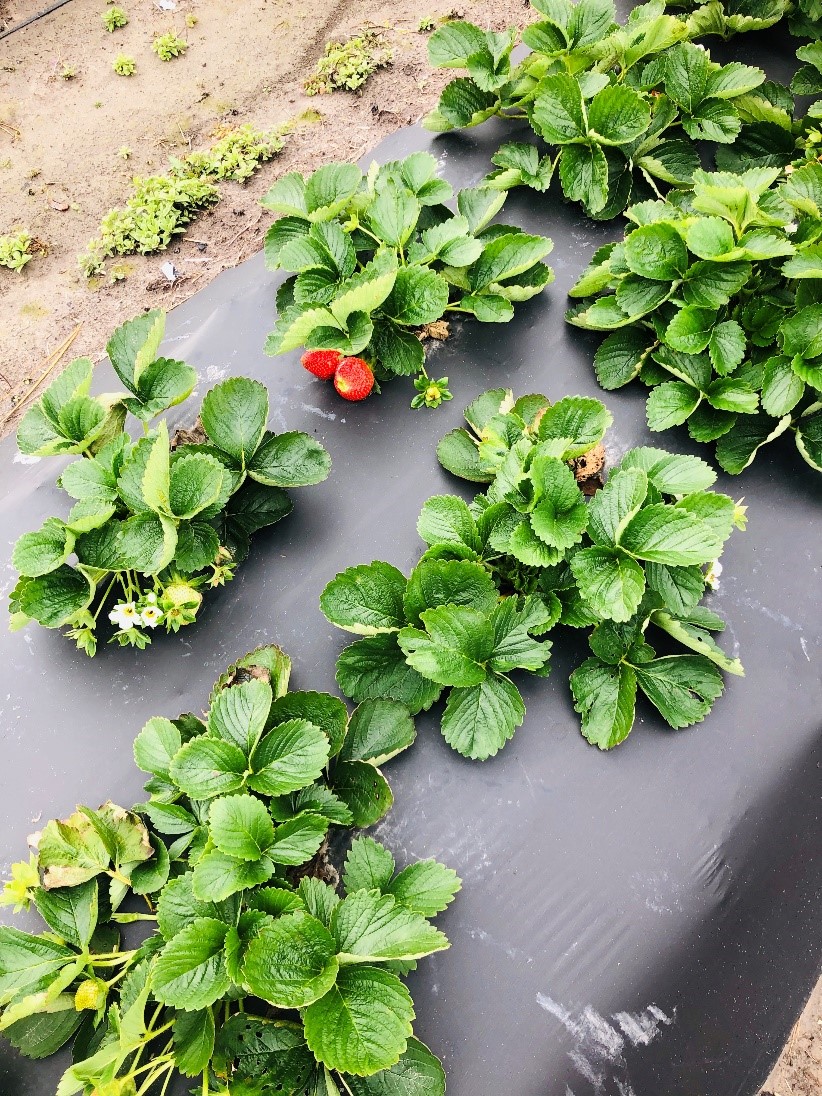 Image 1. One of the more advanced plantings of ‘Sweet Charlie’ observed on 18 Dec. 2020 in Virginia Beach, VA. Plug plants were transplanted on 27 September 2020 (Source: Jayesh Samtani).

Growers should inspect plants now and count branch crown numbers (Image 2). This is typically done by digging up an entire plant and pulling off the branch crowns (Image 3). The ideal crown number for optimum fruit production and fruit size is cultivar dependent, but in general, branch crown number on short-day cultivars in January should range from 1-2 per plant which will normally result in 4-6 crowns per plant by spring. Branch crown numbers of 2-3 or more in January could result in 6-8 crowns by spring which is of concern due to the impact on reducing fruit size, especially on cultivars such as ‘Sweet Charlie’. Significant fruit size reduction occurs on strawberry plants with eight to 10 crowns. 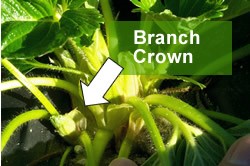 Because of the unusually high amount of GDD that were accumulated mostly in November of 2020, it is not surprising that cultivars such as 'Camarosa’, ‘Fronteras’ or ‘Sweet Charlie’ may have blossoms and even fruited in late fall.

Because strawberry plants have likely gotten both sufficient chilling and sufficient GDD, the crop in some areas could be quickly ‘pushed’ toward bloom with additional warm temperatures. 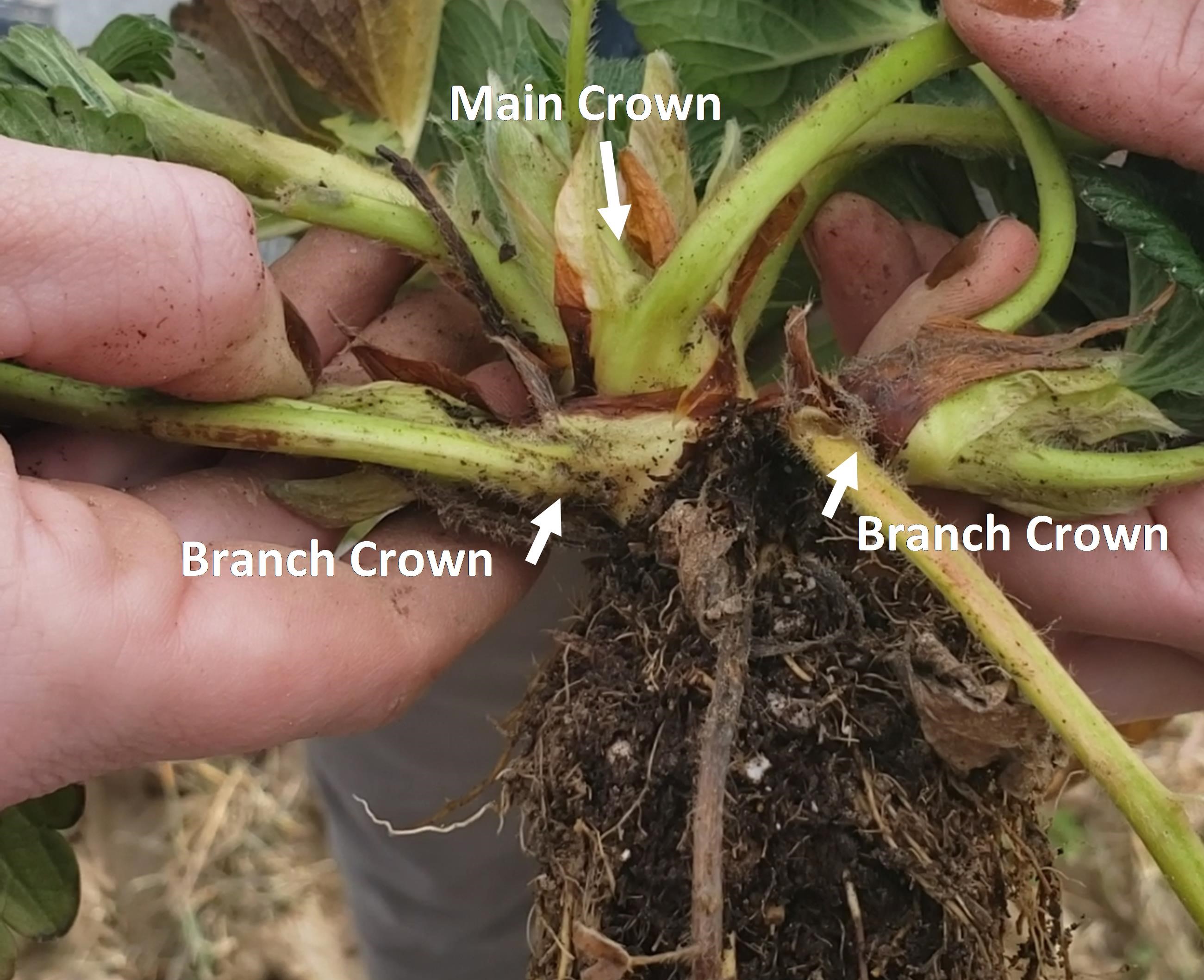 At this point, we do not have major concerns that these early blooms will represent a significant loss of crop production, particularly if plants are showing good branch crown development. Instead, a concern is that dead early blooms and any fruit left on the plant could be a source of inoculum for botrytis crown rot or botrytis fruit rot. In general, sanitation (i.e. removal of dead leaves, blooms, and fruit) should reduce fungal inoculum levels, shorten drying time after rainfall, and improve spray coverage. Whether sanitation practices actually have a significant impact on disease or yield in NC, AR, or VA is still unclear, however. One study out of Florida shows very little effect of sanitation on disease development and no effect on yield.

Growers have wondered how early accumulation of GDD and early blooms may impact the crop moving forward.

At this point we recommend growers focus on protecting the crop that is set in the crowns and holding it in dormancy. This means leaving plants un-covered. Row-cover use might lead to more vegetative growth, very early bloom, and higher disease incidence, rather than more fruit. Early blooms will lead to a very high risk to yield losses due to frost and freeze events in early spring. Plants already have accumulated plenty of GDD and the aim for the rest of the winter is to keep plants from blooming for another two months as much as possible.

If temperatures remain cool in February, early bloom is less likely.  If, however, we do experience above-average temperatures in February, there is a concern that due to the extra GDD accumulated in November the crop will be pushed to bloom early. Early bloom in February would put many blooms at risk of cold damage if temperatures drop again later in the month or in March and this could represent a real risk of major crop loss.

For growers who planted late and have concerns about small plants size. Using a row cover at this point is not advisable as it is not believed that row covers in late winter/early spring will result in additional crown development and instead will only result in “pushing” the crop to develop earlier.  This could be particularly risky this year due to the increased GDD that we observed in November which by Jan 1, 2021, has put the crop in many locations with sufficient GDD and bloom will advance with additional warm temperatures.

Growers should also proceed with normal fertility rates and not try to push the crop with higher rates of Nitrogen.

4. Now is the time to buy row-covers to protect your blossoms in spring.

While we do not recommend the use of row covers for crop enhancement at this point, we are concerned about the possibility of an earlier bloom and therefore the higher need for frost and freeze protection. We highly recommend growers stock up on row-covers now and get pipes and sprinkler systems set up in fields.

To be prepared for cold temperatures or even a freeze event, we recommend an integrated cold protection approach. Having sprinklers and sufficient row covers in place can make the difference between a good and a low yielding season. We recommend the use of heavy row covers (1.5 oz) for cold protection. Strategies such as double covering can help to protect blossoms from artic freeze events. For additional reading, refer to VT publication on Frost Freeze Protection (1) (vt.edu). We have listed some row-cover suppliers located in the Southeast in Table 2.

Our team plans to reconvene in February to provide another crop update.

Table 1. Growing degree day (GDD) accumulation in different regions of the Southeast during October, November and December over the last three seasons. GDDs accumulated in November 2020 is on average 2-3 times more than in 2018/19.