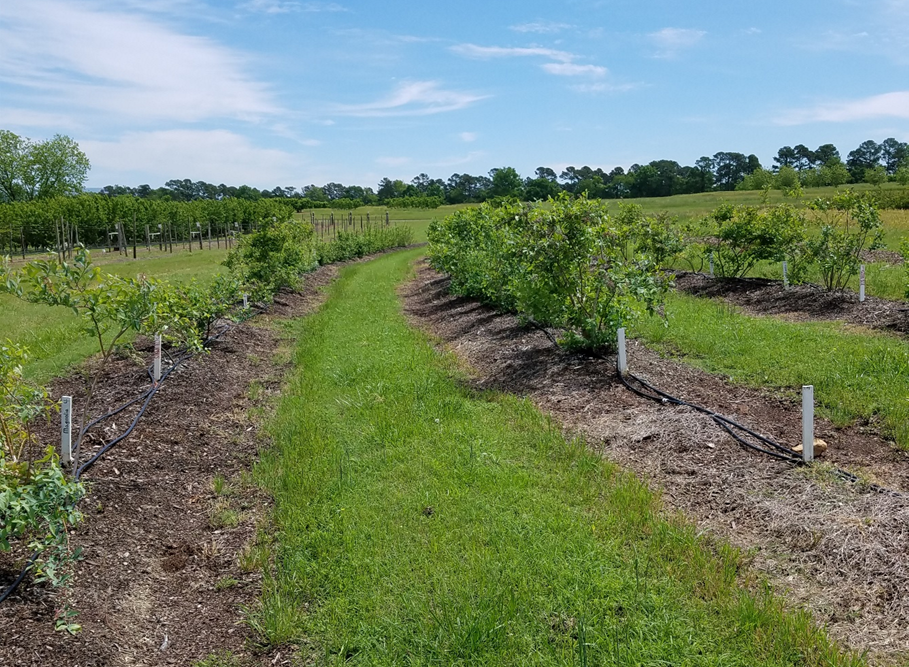 The blueberry variety trial at the Fruit Research Station, Clarksville AR, in the summer of 2017.
Photo: Amanda McWhirt

A four-year blueberry variety trial was conducted in Clarksville, Arkansas at the University of Arkansas Fruit Research Station, yield data was collected between 2014 and 2017.

The four year averages for first budbreak, first and last harvest dates and yield per acre or hectare (ha) for each cultivar are reported in Table 1. The average harvested yield, berry weight, and soluble solids for individual years are shown in Table 2. 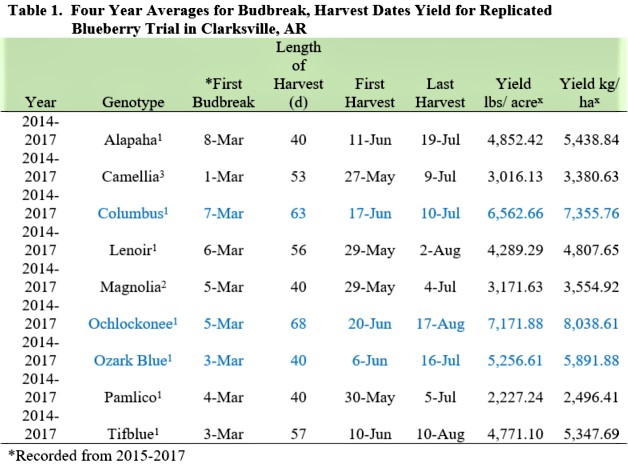 The average bud break data and first and last harvest dates is only useful for comparing when different varieties break bud and ripen relative to each other. In any given year average bud break for the evaluated varieties ranged from mid-February to late March. First and last harvest dates for each cultivar also varied by 10-14 days between each year of the four years of the study.

In the charts below letters within the same column indicate statistical differences at p<0.05.

The majority of the cultivars performed well. The cultivars; Columbus, Ochlockonee, and Ozark Blue had the highest yields on average, with yields per acre averaging from 5,200-7,200 lbs. per acre (Table 1). By contrast Pamlico, did not stand out with only an average harvest fruit yield of 2,200 lbs. per acre.  When year to year harvest data per plot (g) are evaluated, Columbus, Ochlockonee, and Ozark Blue genotypes again showed to have the best performance on a year by year basis with the addition of Camellia (Table 2).

For berry size Camellia, and Ozark Blue both consistently had the largest berry size. Alapaha and Pamlico were varieties that had smaller berries (Table 2). 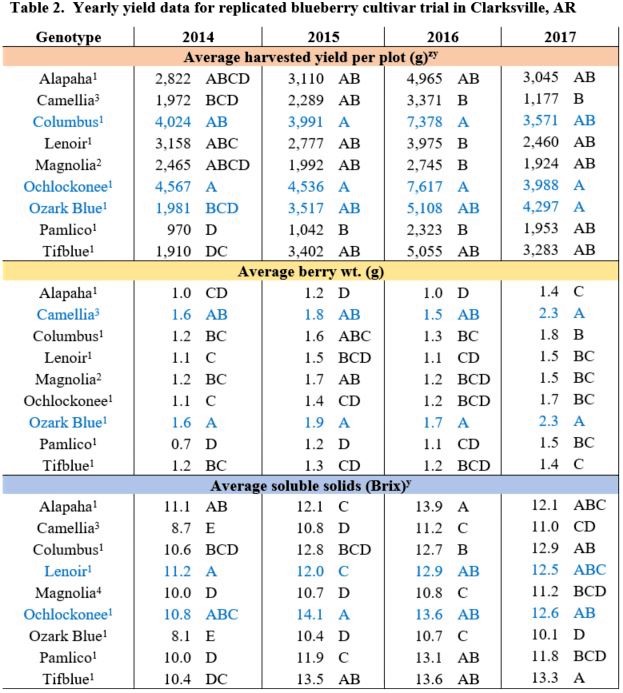 Our results indicate that Ochlockonee (pronounced o-clot-nee) performed well for both yields, fruit flavor and size (Fig. 2). It is a late season producer and harvests continued well into August at our site in Clarksville. This cultivar was a favorite of the picking and research crew. Both for fresh eating flavor and ease of harvesting. The plants always looked healthy and exhibited good and consistent growth (or vigor) from year to year. It demonstrated very pretty berry coloring, and even ripening. This is a stand out variety and yielded nearly 2/3 more on the four year average than what the more standard Tiftblue yielded.

Columbus also yielded nicely in a more compact and slightly earlier season than Ochockonee. Columbus tended to be juicer then the other cultivars. Columbus did struggle with iron and/or nitrogen deficiencies, and had slightly lower vigor than Ochlockonee. This was also a variety that stood out and also consistently yielded more on average than Tiftblue.

Ozark Blue was a high yielder, with good berry size but was not ranked highly for sweetness as measured by Brix.  It has a more compact average 40 day harvest season. Though not as sweet as other cultivars the flavor of Ozark Blue was still good. A couple members of the research crew preferred this berry to its sweeter counterparts stating “it has more flavor.” The berry size made it easy to harvest and stand out from other cultivars. There were issues getting this cultivar to establish and thrive after transplanting. This resulted in the loss of several plants, likely due to poor crop management in the early years of this trial. Once established, however, the plants did well, demonstrating good vigor and, as mentioned earlier, high yields. Ozark Blue is an older release from 1996 but appears to be standing up well to some of the newer releases evaluated in this trial.

Camellia had  large berry size and was very early, which may make it suitable for pick-your-own production or for early market sales. This variety however did not stand out to the research team for flavor.

Lenoir is slightly later than Camellia but still very early, had smaller berries but ranked high for fruit sweetness. It was a favorite of the picking and research crew for flavor. They observed that berry size and flavor was ideal for baking into blueberry pancakes, muffins, breads and ice cream. However, it was observed that Lenoir plants seemed to struggle with vigor and often did not send up any new shoots.

Magnolia also stood out to the research crew for flavor but did not compare to Ozark Blue for plant vigor or yields. 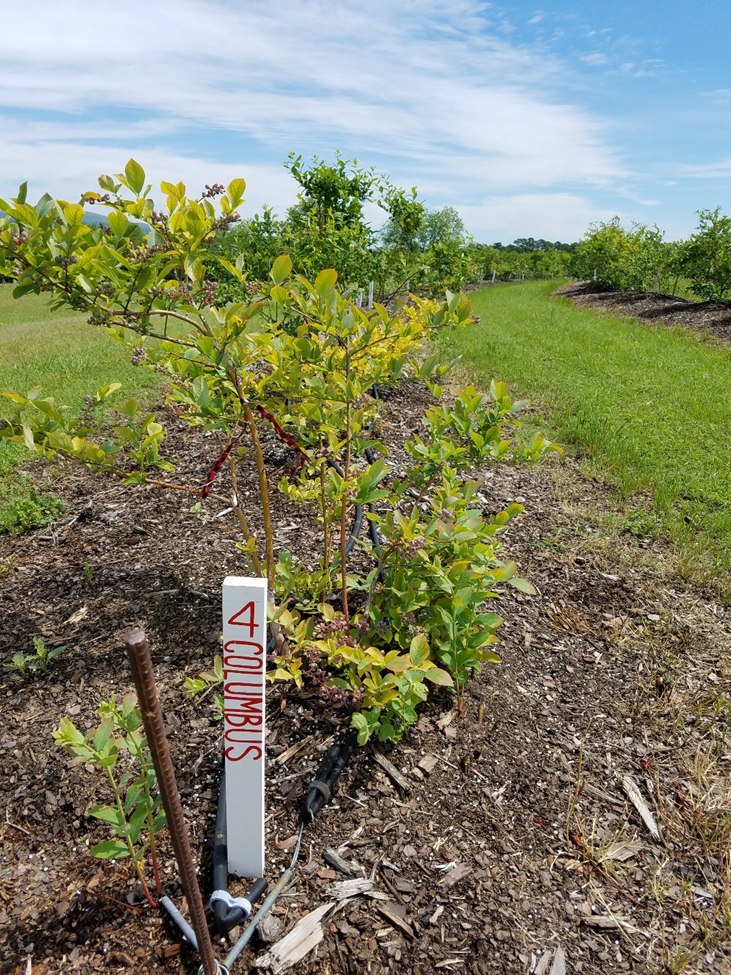 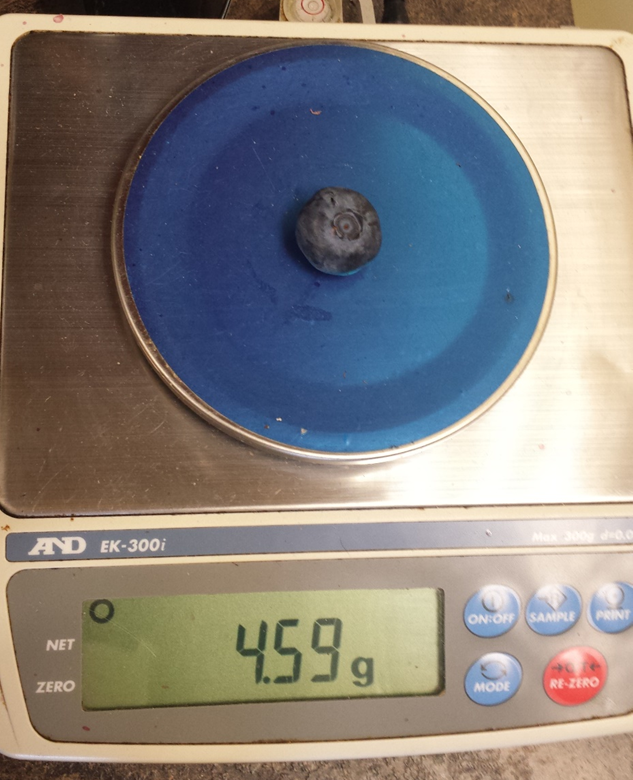 Figure 2. Winner of the biggest blueberry in 2017 at 4.59g, an Ochlockonee variety berry.
Photo: Taunya Ernst

A special thank you is owed to Taunya Ernst and the Research Team at the Fruit Research Station for the care, management and data collection of this project!