Following mild winters we expect to see increased risk of tropical pests that are known to move north throughout the summer. This risk is usually greater in the southern portion of Arkansas, but with active flyers like moths, it often means we get infestations throughout the state. Pickleworm and melonworm are two closely related species that often pose a high risk to Arkansas cucurbits grown in the early Fall. Most growers in Arkansas could tell you a story about a year that they saw significant losses from a “melon”, “rind”, or “pumpkin” worm, but these occasional tropical pests are difficult to prepare for on a yearly basis. Considering that we have already gotten calls from South Arkansas where pickle worm is damaging summer squash, and that we’ve observed melonworm in Western Arkansas, growers and agents need to be on the lookout for these pests.

Pickleworm, Diaphania nitidalis, can damage a wide variety of cucurbit crops but prefers summer squash, winter squash, and some pumpkins. This pest has also been known to damage cucumber and cantaloupe, although they are not preferred. Pickleworm larva feed on the blossoms of these crops but will often move from blossoms to tunnel inside of fruit (Picture 1). Tunneling from the larva makes fruit unmarketable and can also lead to secondary disease infections. Larva will also feed on the rind of some non-preferred hosts such as cantaloupe.

Pickle worm is incredibly difficult to scout before damage is observed as moths are small, lay hard to find eggs at night, and are not attracted to light (Picture 2). When considering that this is an occasional pest, a sound IPM plan for this pest is difficult to achieve. Pickleworm larva are killed by a variety of pesticides such as pyrethroids (Bifenthrin, Mustang Maxx, etc.) which are commonly used for other pests. The issue comes with timing pyrethroid sprays to kill young pickle worm larvae before they move inside of flowers or fruit. Selective products such as the spinosyns (Radiant or Entrust), diamides (Coragen, etc.) or insect growth regulators (Intrepid) will do a better job with control and provide increased residual. 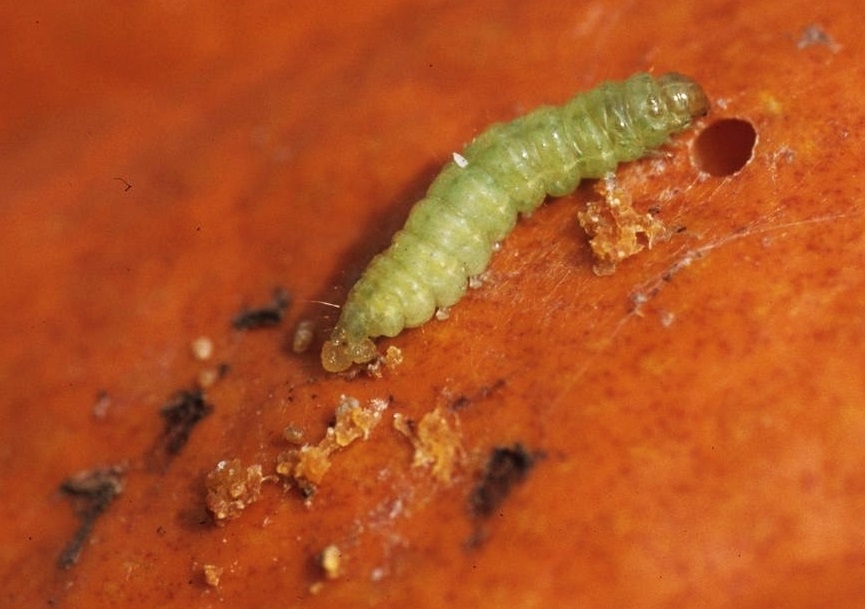 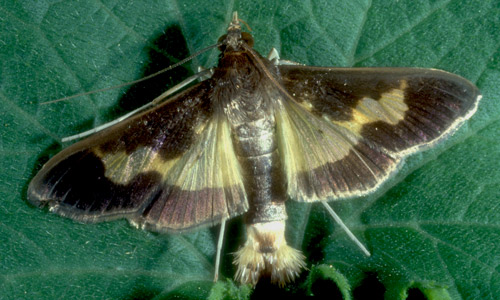 Melonworm, Diaphania hyalinata, also only feeds on cucurbits but primarily feeds on the foliage of the plant. Larvae are often found in rolled up leaves where they spin silk to create a small shelter (Picture 3), and moths are easily identifiable by their distinct coloration and can be observed flying throughout the morning (Picture 4). Damage from this species is easy to identify by the presence of untouched leaf veins with the foliage eaten between. Melonworm is considered only a minor pest in Arkansas because it rarely gets to exceptionally damaging levels on pumpkins early in their development. However, following mild winters they can still be a large issue in late squash or other cucurbit crops. Melonworm is controlled by pyrethroids (Bifenthrin, Mustang Maxx, etc.), spinosyns (Radiant or Entrust), diamides (Coragen, etc.), or insect growth regulators (Intrepid). 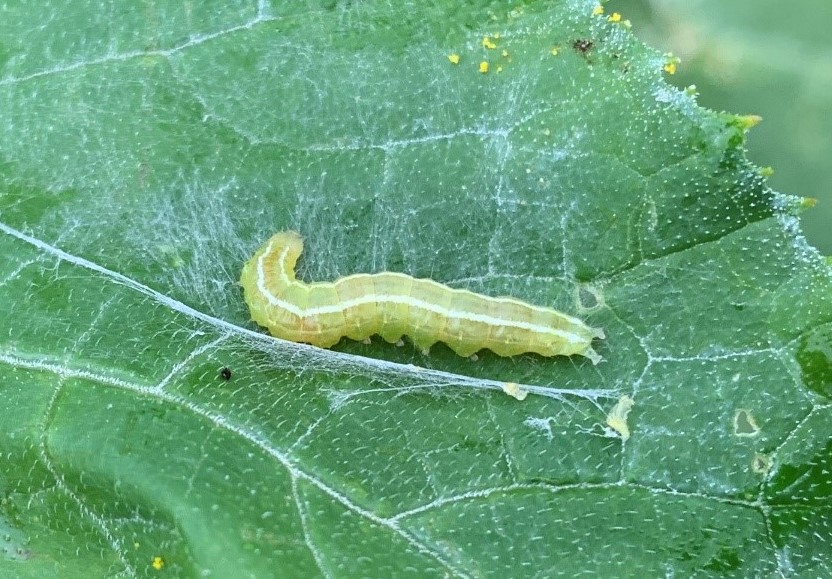 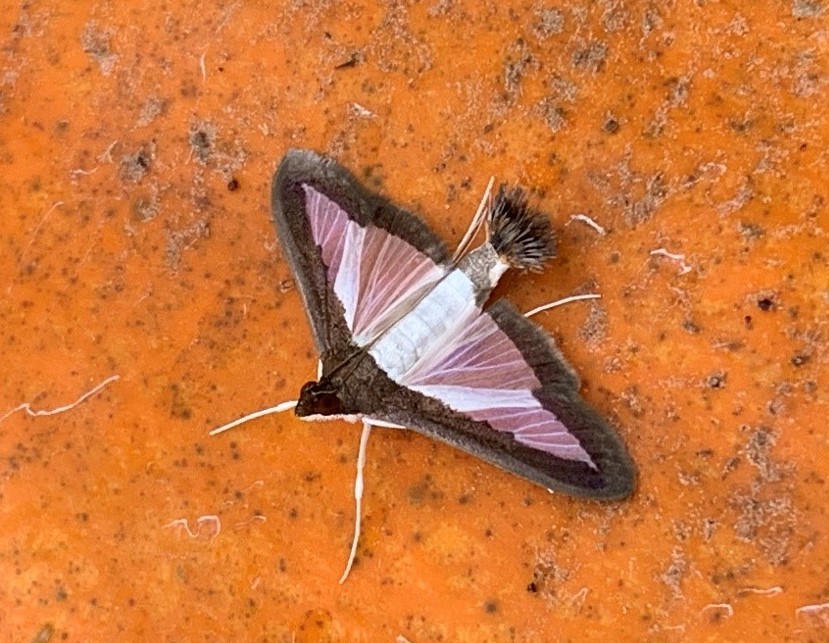 Pickleworm is known to cause large levels of damage to pumpkins and late squash crops in Arkansas. Growers should always be on the lookout for this pest when we get into August and should pull the trigger on pesticides as soon as damage to flowers are observed or if other growers are finding this pest within the state. Pyrethroids used for cucumber beetles or squash bugs will provide control but the timing must be right, and applications need to be at least every 5-7 days. Selective products such as Coragen are preferred because they will not flare aphids and they provide 14 or more days of residual. We’ve seen many growers in the state try to use pyrethroids to manage pickleworm and be very disappointed with results. They are often forced to swap to diamides to try to cleanup infestations. Melonworm is much easier to manage and control may not be warranted when infestations occur in mature pumpkins crops where loss of some foliage won’t hinder fruit production. Checkout the Southeast vegetable guideand the MP144 for product recommendation.