Here is a guest post from graduate student Erika Henderson sharing the work she's been doing on using a rotating low-trellis training system in hops!

Hops require vertical systems to support bine growth. Typical standard hop trellis systems have 12- 18 feet tall pole supports with vertical strings or netting that encourage bine growth, airflow, and sun exposure (Kemme, 2013). Trellises 12 feet tall are often referred to as a “low” trellis, as 18’ tall is standard. Yields are known to be reduced on low trellising systems, however ease of management is increased for small scale growers. Netting, in place of vertical string or twine, has been found to be inadequate for ease of weeding and harvesting in a hops trial done on a low-trellis in Canada (Brennan, 2012). The adequate spacing of the hops plants is important for airflow and to prevent fungal diseases within the hop canopy, but if plants are spaced too far apart yields can be lower per acre (Kemme, 2013).Trellising and training of the hops can thus be critical to the production of high-quality hop cones.

The IBEX hops growing system is currently being evaluated at several locations around the country for hop production and is not yet commercially available. The design is similar to the Rotating Cross ArmTM trellis used in blackberry production, which is manufactured by Trellis Growing Systems, LLC. The IBEX hops growing system has 12’ long arms posts spaced at 30 feet apart and four horizontal wire supports that run between the arms. It can also be rotated at different angles to provide easier bine training, harvesting and pest management. The modified trellising system could also potentially be used with a modified training system that could affect the production of side laterals and the number of cones per bine.

These advantages may give a unique opportunity for small farms with 0.25 to 5 acres or for small organic production (Barnes, 2016). The ability to shift the canopy at harvest may make harvest by hand easier or potentially facilitate mechanical harvest. ). Moving the arm of the trellis requires minimal labor input. It is feasible for one to two people to move the long arm up and down during seasons of hop growth, which would benefit small-scale growers who have minimal labor (Barnes, 2016).

Maintaining hop plant health without the use of heavy spray applications is a common concern for small-scale hop growers (Barnes, 2016). The Rotating Low-Trellis system may take less time to spray when compared to the spray management of a standard high trellis (Barnes, 2016).

Hop variety selection is important to consider when growing hops on a low trellis. There are hop varieties that set cones high on the bines and may not be suitable for planting on reduced height hops trellis designs (Kemme, 2013). Low-cone setting hop varieties, like ‘Cascade’, are suitable for a low-trellis design (Brennan, 2012).

Our project will evaluate four varieties of hops planted on an IBEX hops growing system at the University of Arkansas Fruit Research Station in Clarksville, AR. The trial consists of the varieties ‘Crystal’, ‘Cascade’, ‘Zeus’, and ‘Cashmere’ that were planted on June 24th, 2019 next to a previously established standard trellised hops trial (Pictures 1-2). The goal of this trial is to evaluate the performance of hops on a movable Low-Trellis design for small-scale hop production in the state of Arkansas. 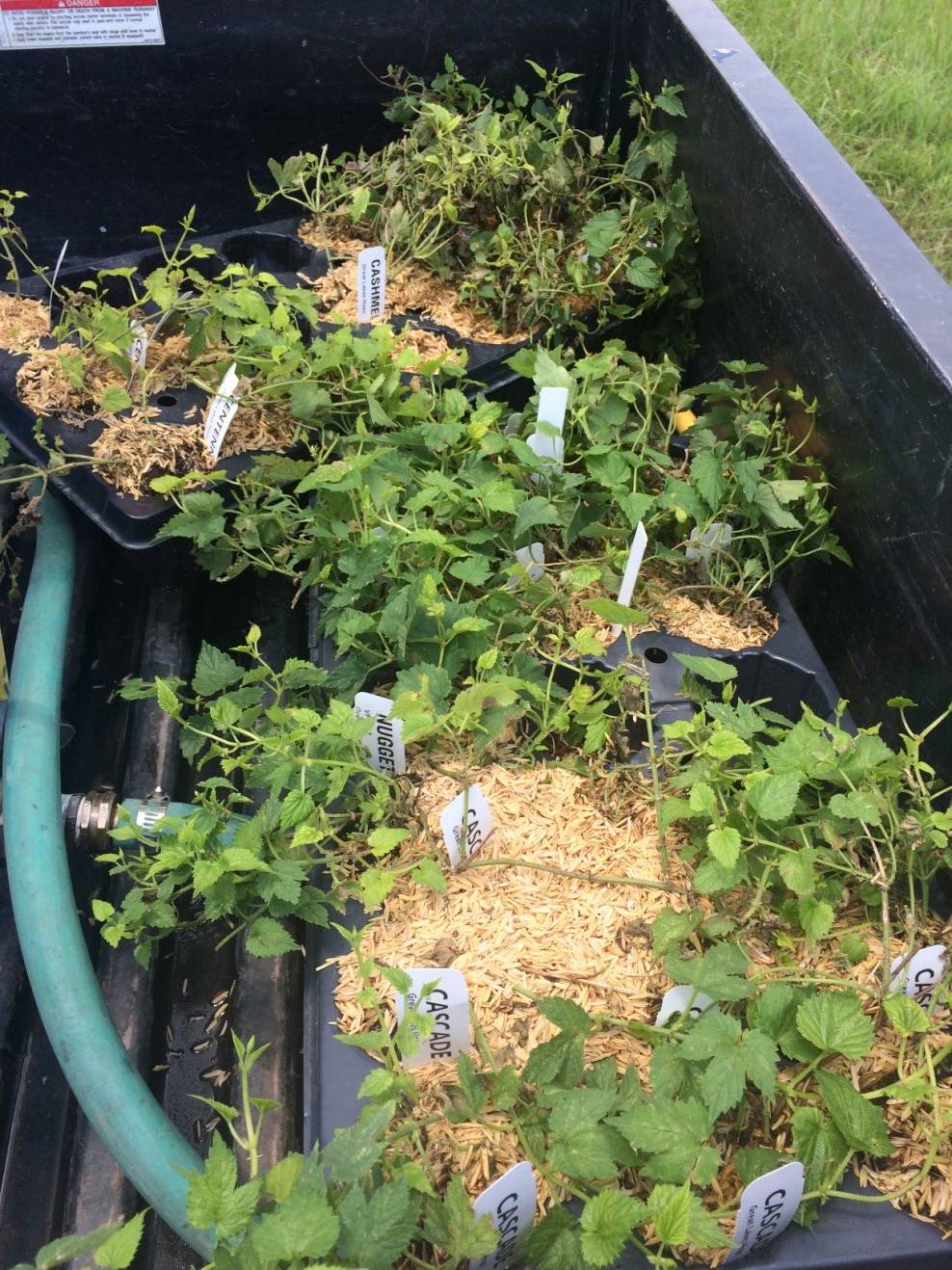 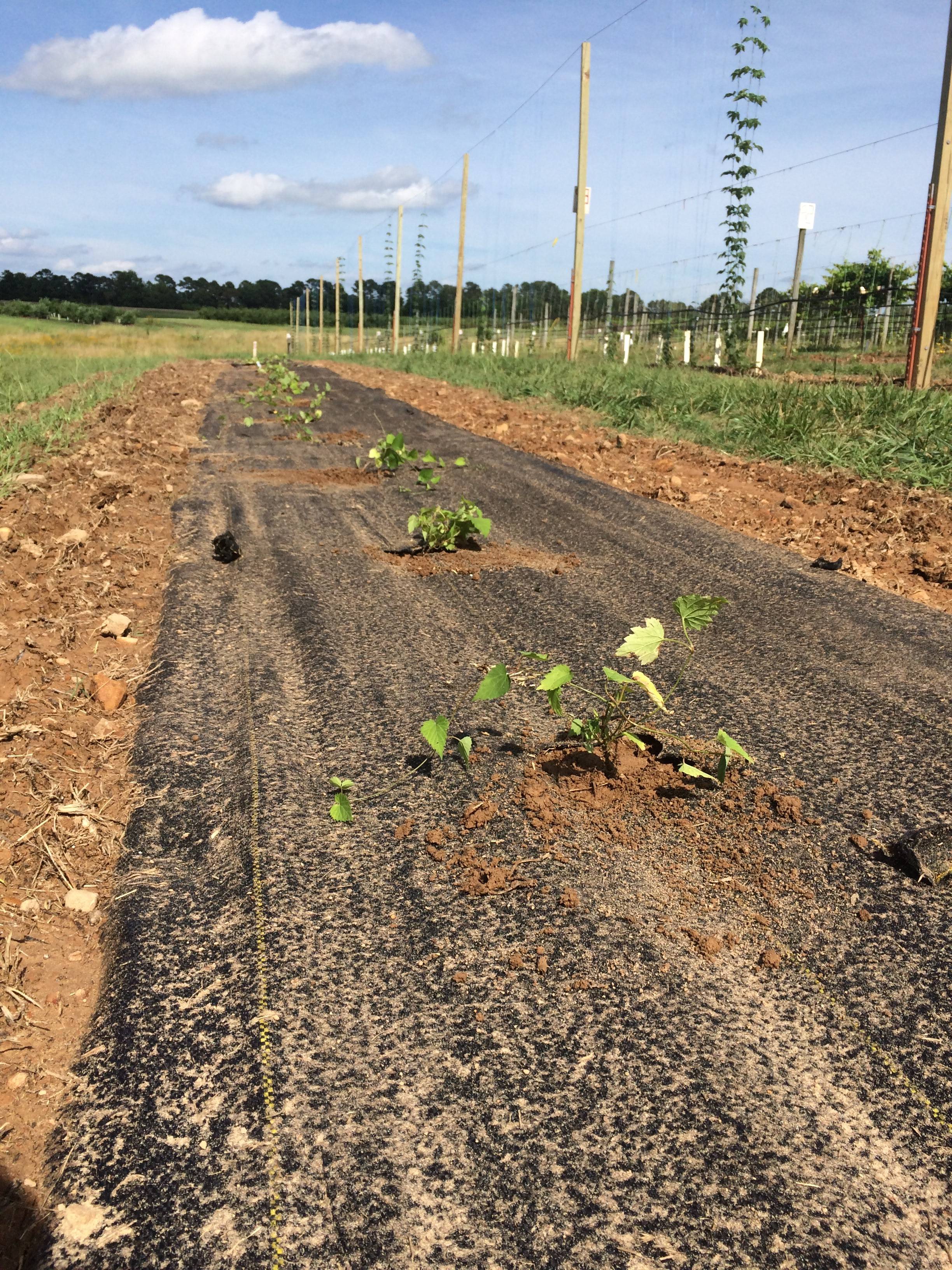 Picture 1-2: ‘Crystal’, ‘Cascade’, ‘Zeus’, and ‘Cashmere’ hop plug plants prior to transplant (left); Hop plants planted prior to final construction of the IBEX hops growing system. The standard hop trellis can be seen in the background (right).

The hops plug transplants ( Picture 1) came from Great Lakes Hops in Michigan and the IBEX hops growing system came from Trellis Growing System in Fort Wayne, IN. TheIBEX is 60’ long-running east to west with three 15’ long blocks. Each block consist of the randomized four varieties planted 3’ apart. The trellis has three posts spaced 30’ apart (Pictures 3-4). Tie-back posts are located at the east and west ends 7.5’ away from the first hops plant. 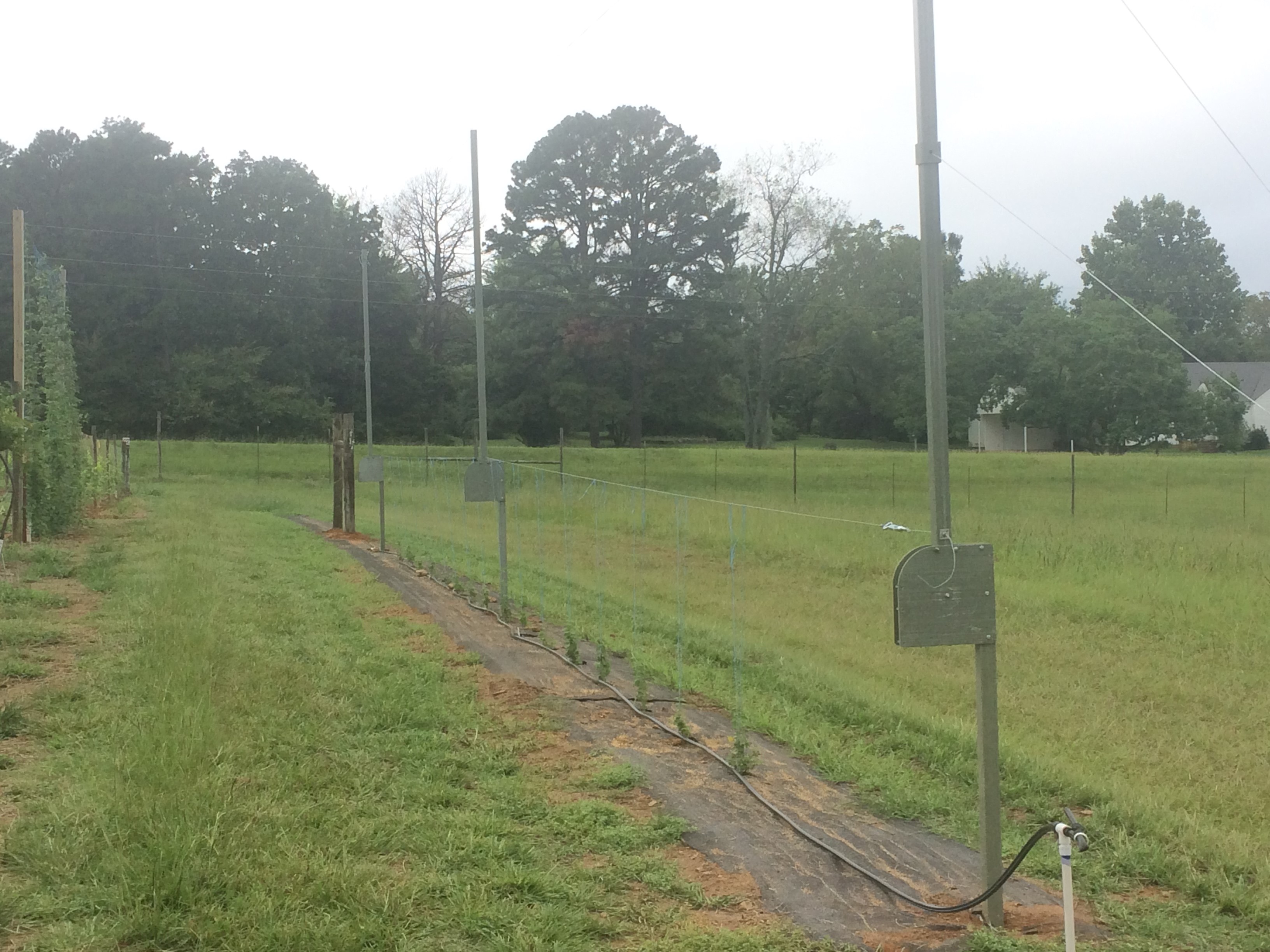 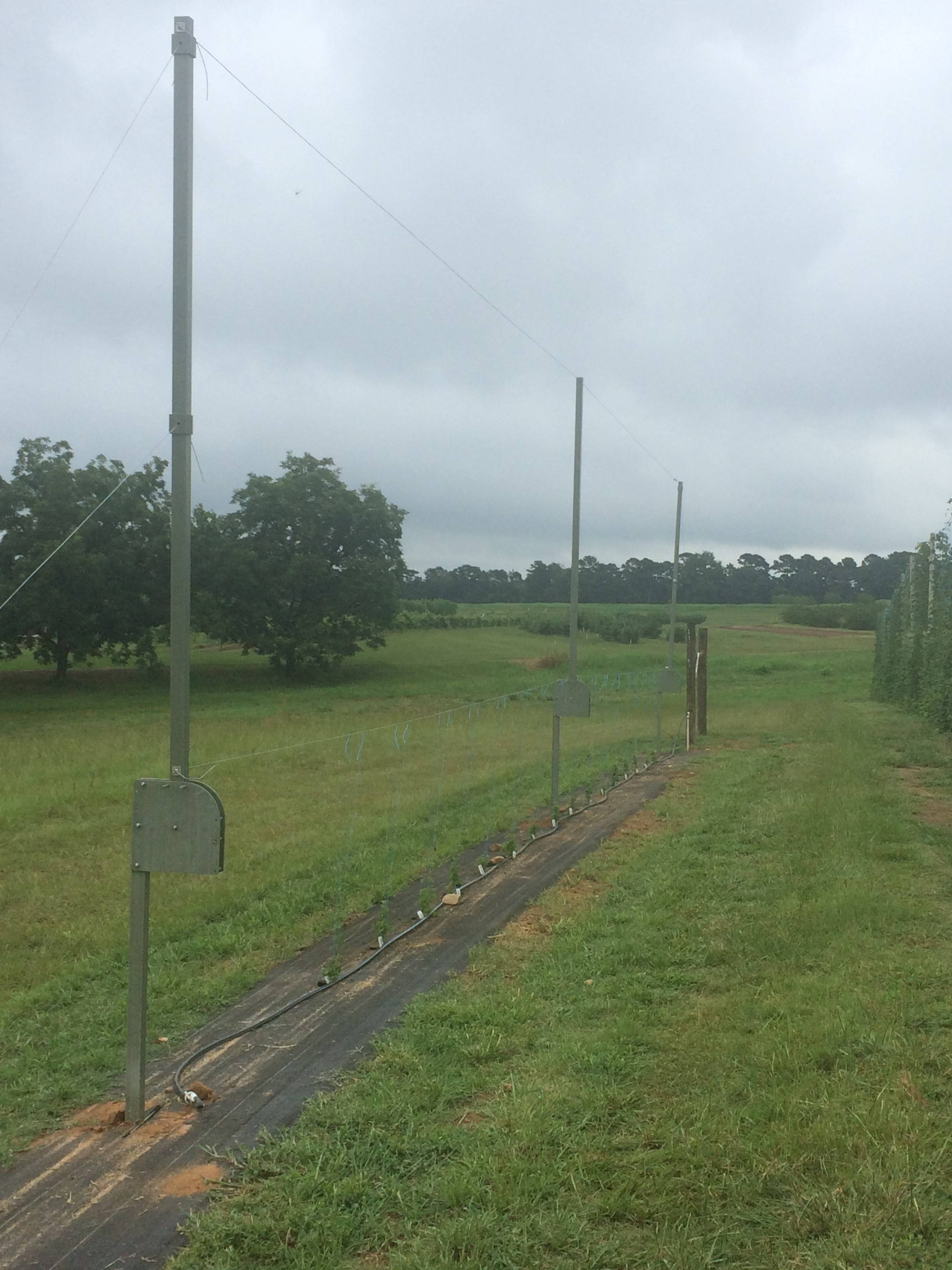 Picture 3-4: Three post IBEX hops growing system constructed on August 7th. The trellis arms can be rotated downward at each post near where the square plate is located.

The 60’ row was tilled in late June and 46 lbs. of lime and 7.6 lbs. of triple 15 pre-plant fertilizer was applied (Picture 5). Landscape fabric was laid out on June 14th to help with weed control (Picture 6). 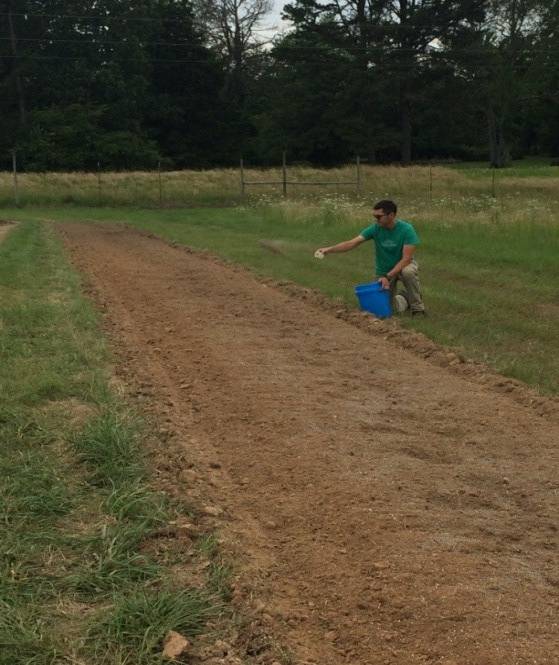 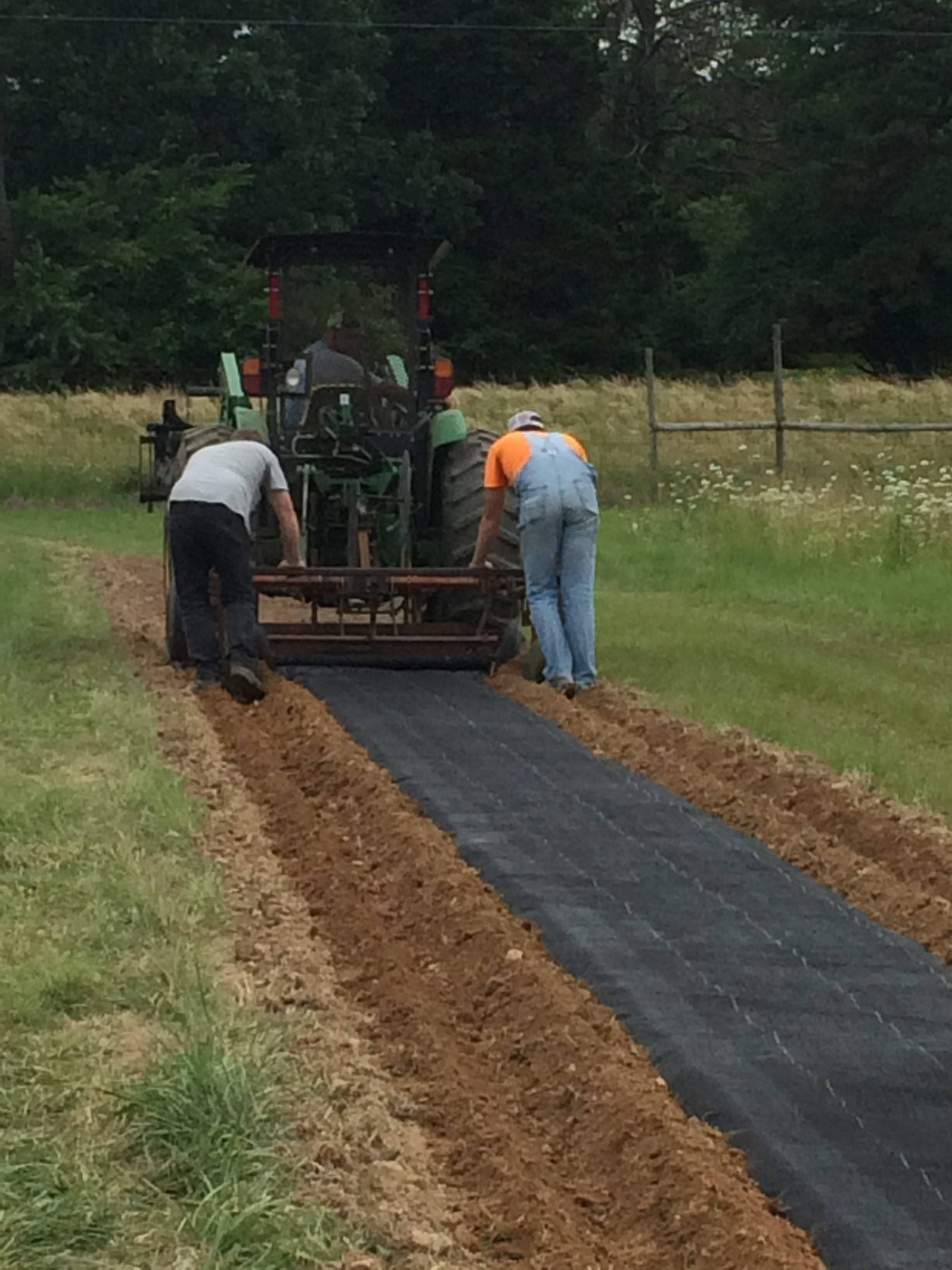 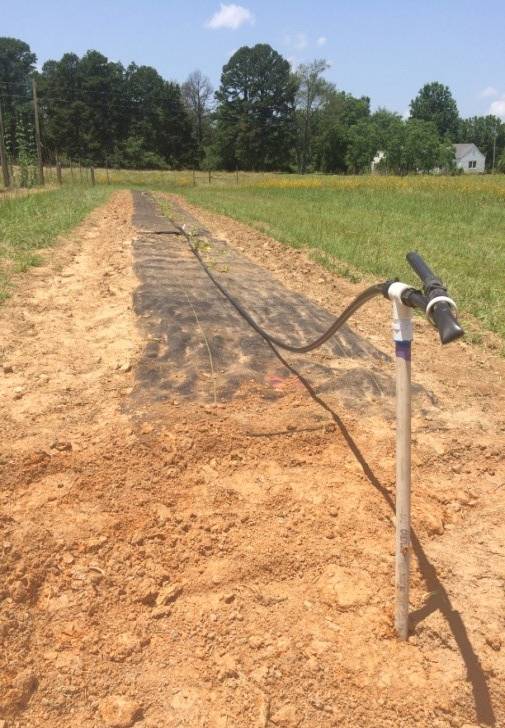 The hops transplants were acclimated before planting and then planted on June 24th on the north side of the Fruit Research Station vineyard. The hops were hand-watered until irrigation was set up on June 27th (Picture 7). The irrigation ran based on weather, temperature and soil moisture in the vineyard. Each plant received 0.03 lbs N of Peter’s Professional liquid fertilizer on July 12th. To prevent sun and heat damage, a temporary shade cloth was put over the young hops before the trellis was set up (Pictures 8-9). The ideal planting date for hops is in the spring or early fall, mid-summer planting is not generally recommended. 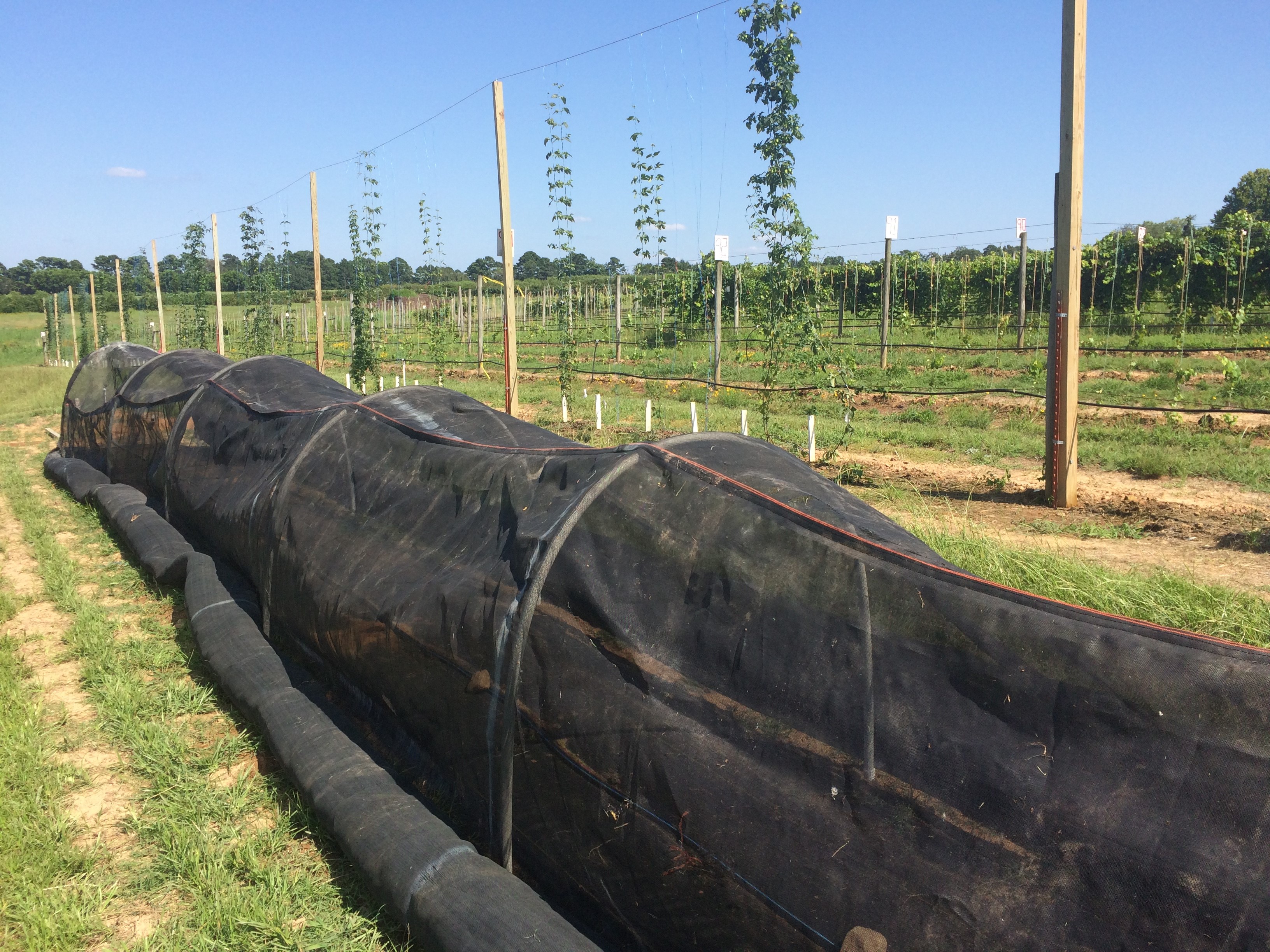 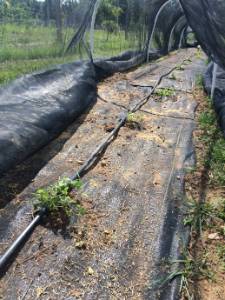 Observations planned for the 2020 trial include yield, the physiology of hops plants, disease and pests, and hop cone quality. The observations taken are assessed on how hops plant vigor performs on a low-trellis system in the Southeast climatic conditions and how the rotating positions of the trellis can allow easier harvest and management. No hops will be produced the first year of 2019 to take observations on, but observations on plant establishment will continue into the fall.

Home and local beer production in the state of Arkansas is a growing interest and some small-scale farmers prefer more low input or organic production. New trellis opportunities, such as the IBEX hops growing system, may give small-scale farmers an advantage to maintain their hop plants in a sustainable way while keeping good quality yield and hop plant health with less time and labor.