Hops Pest Control in Arkansas – What We Learned in the First Year
skip to main content
Arkansas Fruit, Nut, Vegetable, and Nut Update

Figure 1. Young hops plant at FRS and mature plant with cones at FRS

First of all, we would like to send out a big “Thank You!” to our collaborators who graciously volunteered their hop yards and time to assist with this project along with the staff at the University of Arkansas Fruit Research Station (FRS) where we established our own hop yard. Their observations, hard work and knowledge of pest issues were incredibly helpful to the success of this project. Overall, 2019 was a great year for hops production in Arkansas!

The trial at the FRS was composed of nine 18’ plots, each planted with six common hops cultivars (Cascade, Nugget, CTZ, Cashmere, Centennial, and Crystal). The cultivars were randomized within each plot and evenly spaced 2.5’ apart. Plug plants were sourced from Agristarts and Great Lakes Hops. After a bit of a slow start and a few replacement plants ordered, we were amazed at how quickly most of the varieties got established!

A little background on hops pests…

Hops require a good pest management plan. There are many things that can impact quality including  feeding from insects and mites, damage from diseases, and competition from weeds. Pest injury can result in direct crop loss as well as a reduction in quality, which can have an impact on brewing characteristics and marketability of hops. Some pests are less likely to be a problem in the establishment year, while possibly becoming more of an issue in subsequent years. For this reason, it is important to scout plants often to stay ahead of pests and to follow a pest scouting and management plan from the beginning. It is always easier to control a pest issue before it becomes a major problem! Since this was the first hops project in Arkansas our goal was to document potential pests and when they occurred to aide in development of a pest timeline. This timeline can then be used for growers to design better scouting and management plans.

Scouting began in early June at all three of our study locations. We scouted weekly at Clarksville and biweekly at the other two locations, doing a quick visual analysis of the entire plant for both insect and disease issues. Pests such as mites and aphids can be difficult to detect because of their tiny size, and obvious leaf symptoms do not tend to appear until populations are yield damaging. Because of this, we used a 20x hand lens or magnifying glass to check a small number of leaves (we checked five leaves per plant) while scouting. This is a time saving way to spot an infestation early before it becomes a major issue. We anticipated that our biggest pest issues would be spider mites, powdery mildew and downy mildew. All three are common in more northern hops growing regions, but here in the south we have ideal conditions for these pests to thrive, thus putting our hops at higher risk for infestation/infection.

Weed control: We made two pre-emergent herbicide applications in early spring about six weeks apart using Prowl H2O in a band two feet wide on each side of the hop trellis. Prowl is safe for contact with the hops foliage and we did not note any damage, but it is always best to avoid contact as much as possible by using a ground-directed spray and avoiding windy days. This may not be the case with other products, so be sure to read the label carefully! We did not use any post-emergent herbicide and instead opted to hand pull weeds, but if control becomes an issue, Select Max for grassy weeds and Stinger for broadleaf weeds are both good options. Consult the label for recommended rates.

Insect/mite control: We made two applications of Mustang Maxx to control an armyworm outbreak in late June and early July. The armyworms tended to congregate on specific plants, so scouting each plant was helpful for catching this problem before it became an outbreak. Mustang Maxx is a good broad-spectrum insecticide that is also effective against other troublesome insects like caterpillars and beetles, but next year we will not use this product due to its propensity to flare mites. We plan on using a Bt product that is softer on beneficials. We were most definitely caught off guard with armyworms. They have not been a documented pest in hops so this may be a concern unique to the south where we have large populations due to pasture and row crops. 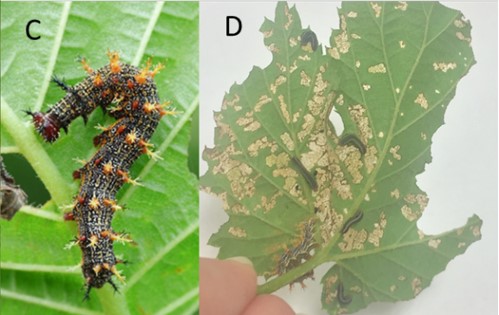 Spider mites can be a major pest of hops, and we thought we were in the clear until they suddenly showed up in force in mid-August. Normally we would have used a dedicated miticide such as Agri-Mek or Acramite, but unfortunately, we were close to harvest and these products have long pre-harvest intervals (PHI). We decided to apply Pyganic two times, ten days apart because of the short PHI. As expected, control was not ideal with this product, but it at least kept the mite numbers in check and damage down to a manageable level. Next year we will put out a miticide earlier in the season when mites average 1 per leaf.

While we did notice the presence of a few other insect pests including Japanese beetles, stinkbugs, grape leaf rollers, question mark caterpillars, and grasshoppers, these pests were sporadic and did not rise to damaging levels. In the future they should be monitored closely and thought of as potential pests. Aphids were not a problem in our plantings but have been reported as a hops pest. In the future we will continue to monitor for aphids and keep an imidacloprid product on hand just in case.

Disease control: Diseases must be managed preventively with calendar sprays. We expected downy mildew and powdery mildew to be the most likely diseases to show up, and our fungicides were targeted toward these two diseases. Hops grow very quickly, so in order to protect the newest growth we made fungicide applications every two weeks starting in mid-May, rotating between Pristine and Aliette. These are both protective fungicides that provide good control against a wide range of potential diseases.

Even with our management plan in place, we did have some minor damage from downy mildew on the lower parts of the bines. Hop cultivars vary in their susceptibility to downy, and unfortunately, many of the aroma hops popular with craft brewers are highly susceptible. Next year we will plan to put out an early fungicide application as soon as the hops begin emerging from the soil and continue to remove foliage low on the bines to help with air circulation. We plan on adding a few additional fungicide applications and spraying every 10 days to prevent damage.

Our collaborators used organic production methods in their hop yards. Even though our conventional  Clarksville site was located approximately 25 and 80 miles away from the other locations, all experienced armyworm infestations.  I think it is safe to say that this will likely be an important pest of Arkansas hops in the future! Bt (a biological insecticide sometimes sold under the name “Dipel Dust”) was applied at both sites and worked quite well at knocking back the armyworms and some other larger caterpillars that were present. We noted some Japanese beetle feeding but did not have any additional problems with insects or mites at these locations. Pyganic is a good organic product for beetles and mites if they become a problem.

Downy mildew was a significant issue at one of the locations. This was likely due to flooding and standing water in his hop yard which made it difficult to scout and apply treatments early in the growing season. The collaborator ended up applying a copper spray, which was effective, but was not able to completely control the downy. Copper could prove a great organic disease management tool for hops when needed. Hopefully this flooding issue will not happen again next year!

Overall, we learned a great deal about hops management and have a better idea of what the key pests will be in Arkansas as well as some other potential pests. We developed a pest timeline to help growers anticipate issues. We also plan on amending our spray schedule by incorporating Bt instead of Mustang Maxx for caterpillar control, making fungicide applications every 10 days, and dropping our action threshold for mites to 1 mite per leaf along with using a conventional miticide instead of Pyganic for extended spider mite control.