Here is a guest post from Arnout VanDamme, a visiting scholar from the University of Ghent in Belgium! Arnout shares the results of the quality analysis performed on hops harvested from the feasibility study led by Drs. Jackie Lee, Amanda McWhirt, and Renee Threlfall.

The Arkansas brewing industry has quadrupled since 2011, growing from six breweries to over 28 in 2019. This unique industry produces over 35,000 barrels per year with an economic impact of $406 million. Hops (Humulus Lupulus) is a key ingredient for brewing beer. The quality of dried hops is dependent on lupulin, the yellow sticky powder in the hop cone which contains alpha-acids and beta-acids. Alpha acids generate the bitter taste in the beer after cooking the hops, and Beta-acids are important for longevity.

Hops grown in Arkansas have potential to impact the growing craft brewing industry. A research project was initiated at the University of Arkansas System (UA System) Division of Agriculture by Drs. Jackie Lee, Amanda McWhirt, and Renee Threlfall to investigate the feasibility of growing hops in Arkansas and determine the quality of the hops. This project is supported by a grant from the Arkansas Department of Agriculture’s Specialty Crop Block Grant Program. Arnout VanDamme, a visiting scholar from the University of Ghent (Belgium) worked on the quality analysis of the hops as a project for his research.

The hops were planted at the UA System Fruit Research Station in Clarksville, AR in September 2018 (Figure 1). The hops were grown on a trellis system that was 12 feet (3.66 m) high with 30-inch (76.2 cm) plant spacing.  Six cultivars (Cascade, Cashmere, Centennial, Crystal, Nugget, and Zeus) were planted in three blocks with three replications per block with randomized planting order.

Figure 1: Cultivars (left) and plots (right) of hops planted at the University of Arkansas Fruit Research Station in Clarksville, AR

The methods to determine when to harvest hops was discussed in a blog post by James McLellan, a UA System Food Science Department graduate student. Harvesting the hops cones for this project was done weekly from late July to mid-September. Hops for quality analysis were only harvested from Cascade, Cashmere, Crystal, and Zeus, because Centennial and Nugget plants did not produce enough hops for analysis.  The hops were harvested by plant (plot), placed in paper sacks, and transferred to the Food Science Department in Fayetteville for drying, storage and analysis.

A ripe hop cone typically has a moisture content of 75-80%. A key factor in hops quality is to dry hops quickly and properly. There are several options for drying hops that growers can use. Hops can be dried in an oven set to a low temperature not to exceed 140°F (60°C), but the oven needs to have adequate air flow. Hops can also be placed on drying screens, such as a house air filter, and placed in a warm dry location, but this can take a few days for hops to dry. On a small scale, hops can be dried in a food dehydrator purchased commercially.  In this project, a walk-in cooler that was converted to a food dehydrator with temperature control, circulation, and a dehumidifier was used to dry the hops.

For this project, the hops were transported and dried in paper bags. An equal number of cones (about 30 or 40) were put in each bag so the hops would dry uniformly.

The hops were dried at 110°F (43°C) for about 11 hours. After drying, the optimal moisture content of the hops should be 8-10% moisture by weight. If hops are dried too much, the hops could have bad flavors and lose lupulin. If the hops are not dried enough, the lupulin does not come free from the hops, the quality will not be optimal, and the hops could become moldy, wilted or rancid.

It is important to know how to visibly tell if the hops are dry. If the yellow powdery lupulin falls from the hop cone easily, and the texture of the cone is springy, papery and light, this is a good indication the cone is dry. A more scientific way to check hop cone dryness is also available by using a moisture content method. This method is explained here at the University of Vermont.

Properly packaging and storing hops after drying is also critical for hops quality. The hops for this project were vacuum sealed in 3-mm plastic bags and stored in a freezer at 14°F (-10°C). An ULTRAVAC Vacuum Sealer (Model ULTRAVAC 500) was used to vacuum seal the bags with about 80% removal from the package. When using a vacuum sealer with multiple settings of vacuum strength (removal of air from the package), check the amount to remove (percentage of vacuum power) to seal the hops firmly without crushing hops completely. Most vacuum sealers that can be purchased commercially will not have as many options for air removal as the one used in this project.

Hops growers that want to sell hops commercially will need to have their dried hops analyzed by a laboratory for the alpha and beta acids.  The results of these analyses will be used by the brewery to confirm the quality and to determine the quantity of hops to put in the beer. When hops growers get a laboratory report for hops analysis, the percentage of acids in the hops might be reported as wet weights and/or as dry weights. The wet hops moisture content is the moisture content of the hops that was received for analysis, because the wet hops is not 100% dried.  Since, hops submitted for analysis can vary in amount of dryness, the hops have to be dried completely to determine the dry weights. Dry weight is determined by placing the wet hops in an oven at 103-104°C (217-219°F) for an hour so that the hops become 100% dried (bone dried). The dry weight is the final weight after drying.  The percent moisture content is calculated as the ((wet weight - dry weight)/wet weight) × 100. For example, if 2.0 grams (wet weight) of hops were used for analysis and the dry weight was 1.84 grams, the moisture content of the wet hops would be ((2.0 -1.84)/2.0) × 100 which is 0.8 or 8%.  The report from the laboratory might indicate alpha and beta acids on the dry weight basis or the wet weight basis. 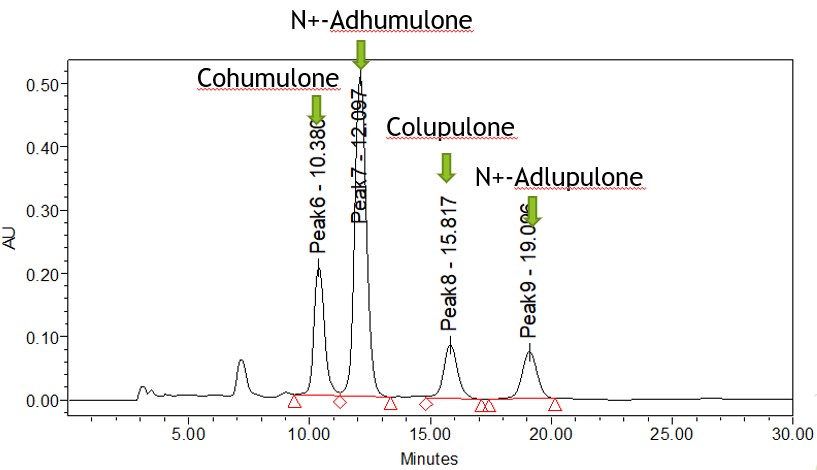 The alpha acids (cohumulone and adhumulone) and beta acids (colupulone and adlupulone) of the hops grown in Arkansas were evaluated in this study. Only four cultivars (Cascade, Cashmere, Crystal, and Zeus) produced enough cones for quality analysis in the first year. The first four harvest dates for each cultivar and replication were combined for analysis. The analysis was done using an HPLC (High Performance Liquid Chromatography) to evaluate the concentration of individual acids expressed as percent dry weight of hops (using American Society of Brewing Chemists 4, 14 a, 14 b procedures). An HPLC chromatogram in Figure 2 has different peaks for the alpha or beta acids, the larger the surface below the peak is the higher the concentration of an acid. 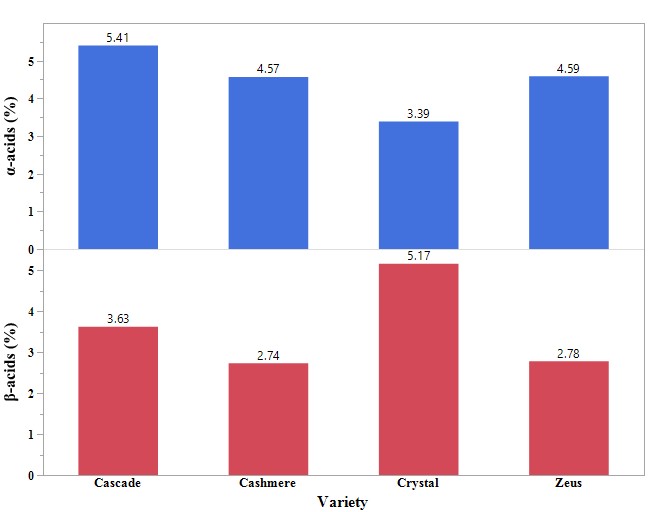 Figure 3: Alpha (α) and Beta (β) acids of cultivars of hops grown at the University of Arkansas Fruit Research Station in Clarksville, AR.