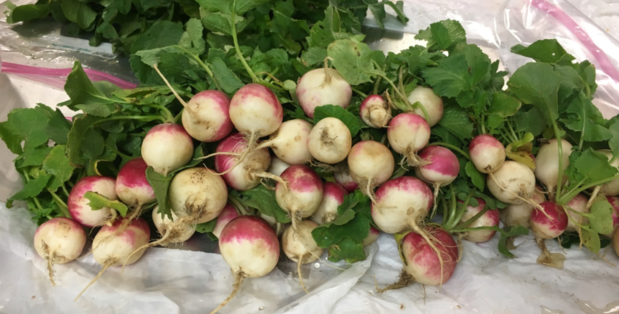 The Southeastern Extension Vegetable Workers are a group of agricultural specialist who are responsible for the editing and publishing of the Southeastern U.S. 2018 Vegetable Crop Handbook. In the summer of 2017, these agricultural specialists came together and decided to trial one new vegetable crop every year for publication purposes and radishes was the first chosen crop.

Arkansas trialed the radishes at the Southwest Research and Extension Center at Hope and the Vegetable Research Station at Kibler.

The 16 radish varieties that were trialed at both locations are shown in the following table: 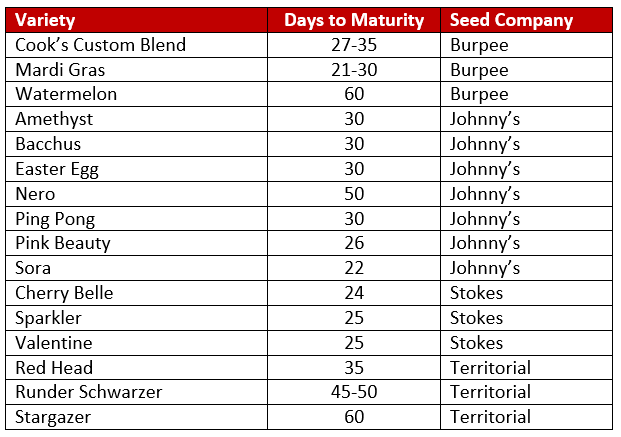 The trials were started later than planned due to inclement weather conditions. The dates of planting, germination, and harvesting are represented in the table:

Both locations followed the same establishment and management steps:

Step 1
Pre-plant nitrogen fertilizer was broadcasted at a rate of 50 pounds/acre and incorporated into the soil.

Step 3
Pre-emergent herbicide Treflan 4 EC was applied at a rate of one pint/acre on top of the bed and incorporated into the soil.

Step 4
Radishes were seeded in five foot long plots with three drills (rows) in each plot. The drills were spaced at eight inches apart. Seed spacing within the row was approximately one inch at a depth of ½ inch.

Step 5
Two drip tape irrigation lines were laid on top of the soil between the drills as a water source.

Step 7
Radishes were harvested and evaluated for yield and flavor. 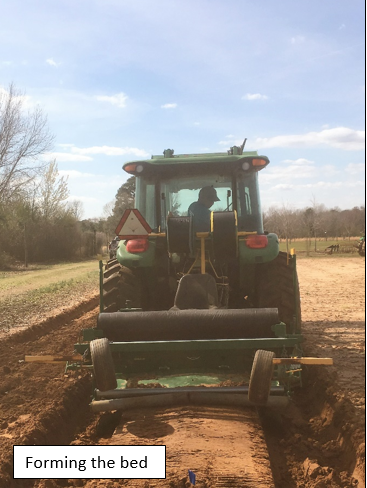 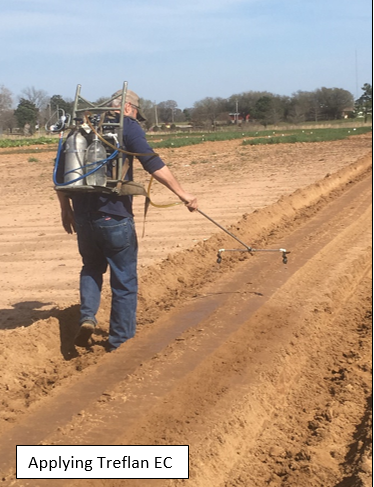 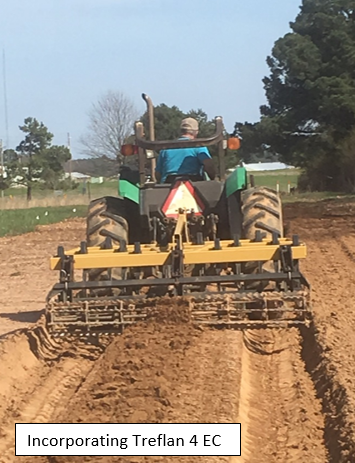 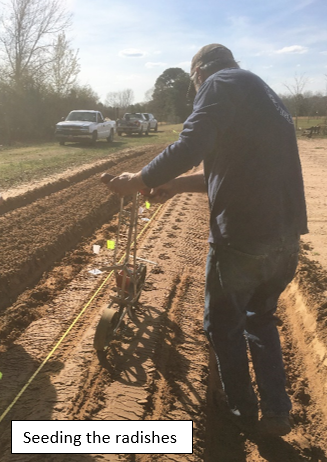 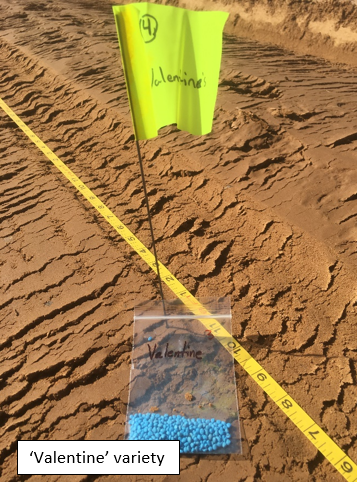 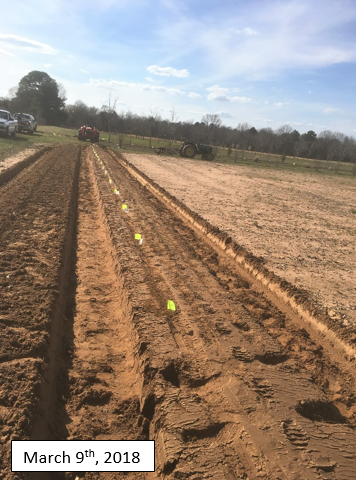 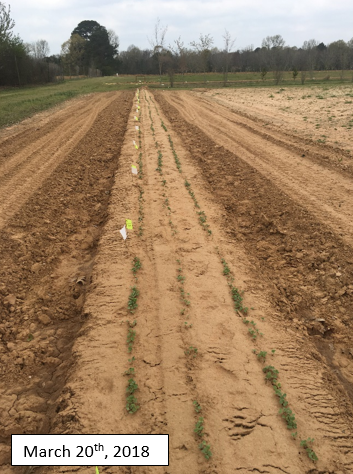 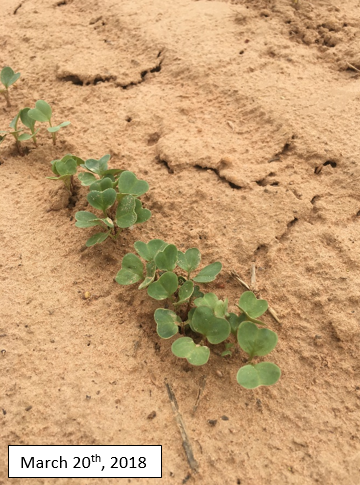 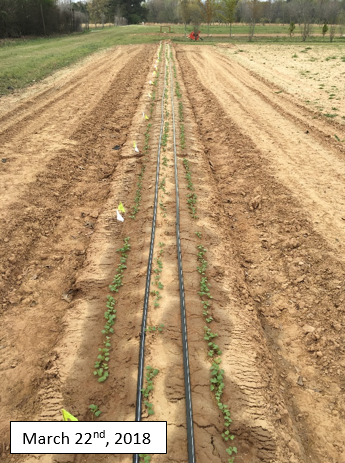 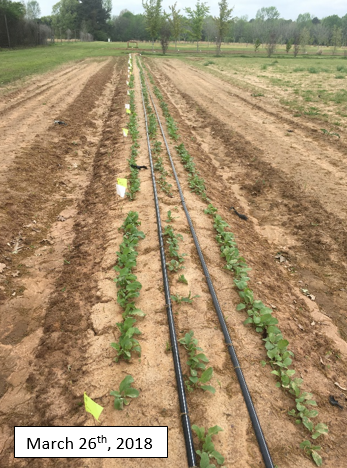 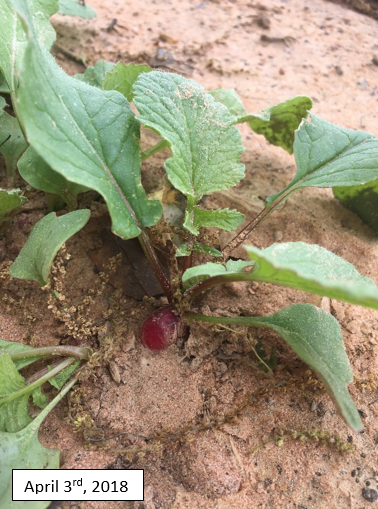 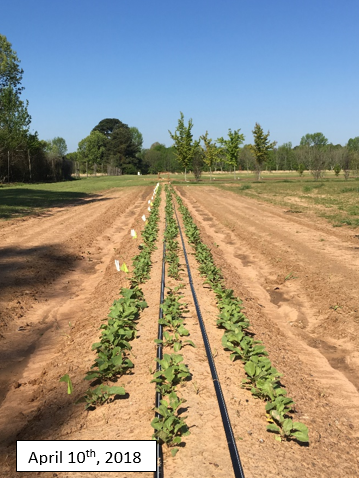 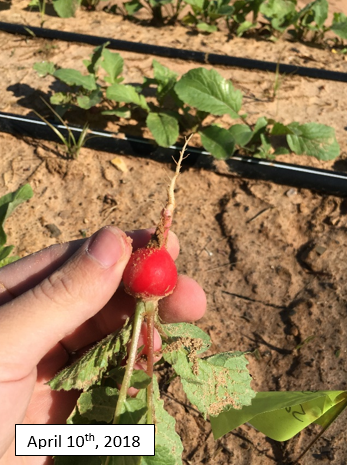 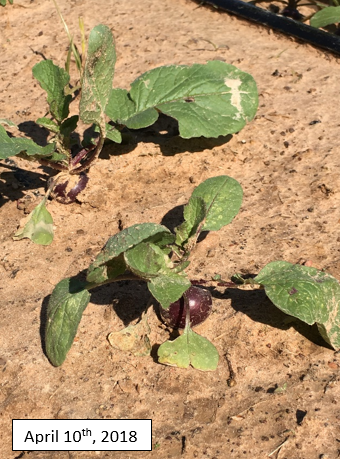 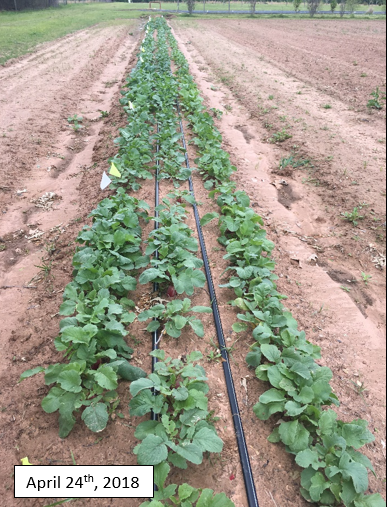 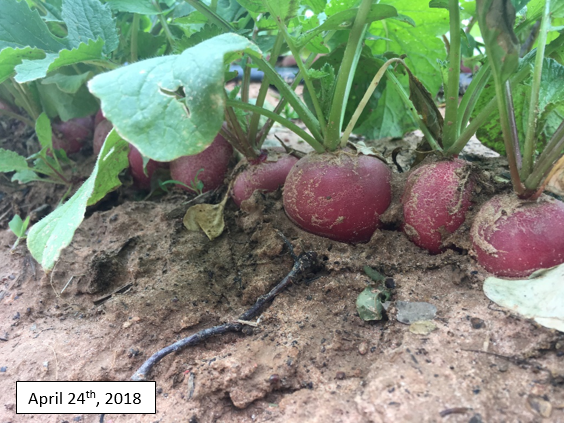 The middle two feet of each plot which consisted of three drills was harvested by hand and taken to the lab for processing. The marketability of the radish crop was determined by the United States Department of Agriculture grading standards. Marketable radish roots must not be less than 5/8 inch in diameter, have no more than 10 percent root defect, and not more than 1 percent decay. Any radish root (bulb) that did not meet these requirements were culled.

The harvest data is reported in the following table: 454g = 1lb 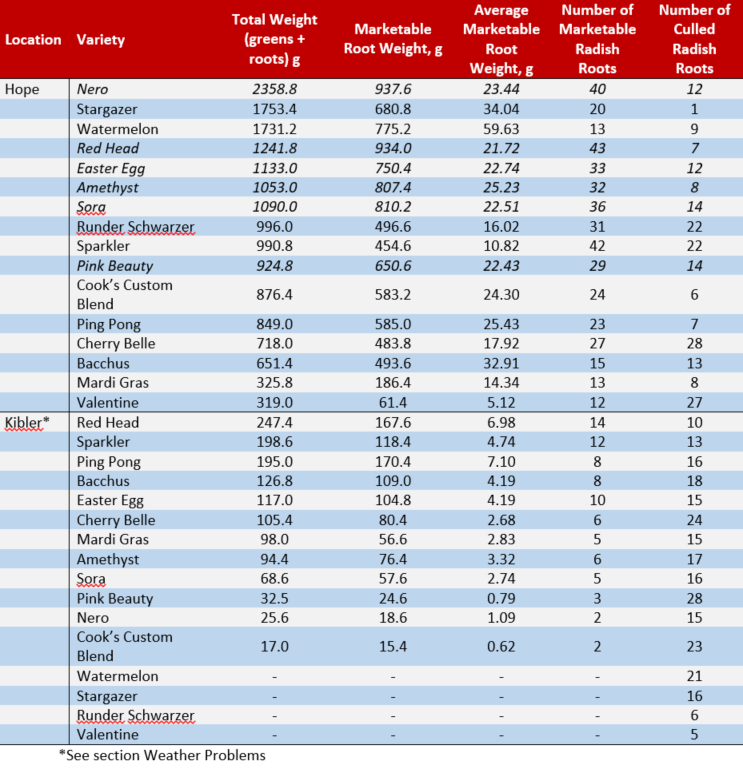 The trial site at Hope fared well with regards to radish quantity and quality; however, Kibler did not. It can be seen in the harvest data that the Kibler yields were substantially lower than that of Hope. The reasoning for this difference will be explained in the following section and only the Hope data will be discussed here in regards to quantity and quality.

There were a few varieties that appeared to perform the best when both total yield weight and quantity of radishes are taken into consideration. They were the following: Amethyst, Easter Egg, Nero, Pink Beauty, Red Head, and Sora. Sora was also highly ranked in the taste test evaluation which we will discuss below.

These varieties had high yields of both radish root and tops/greens. Other varieties such as Stargazer had an extremely high radish top + greens yield, where 60% of the total yield (bulb + green) was green top and only 40% was the bulb weight. The high yielding varieties tended to only consisted of 25-30% green weight, with the exception of Nero. Nero had almost 60% green top weight like Stargazer; but, it had a root yield of 40 bulbs per 2 feet of row, which allowed for an abundant amount of marketable roots compared to Stargazer’s 20 roots per 2 feet of row.

The radish variety Watermelon provided interesting data. It had a high total yield weight (1731.2g) with green tops and moderate root/bulb yield weight (775.2g), but it only had a quantity of 13 marketable roots, which resulted in large individual root weights.

There were few environmental setbacks in the trials that affected the results.

First, excessive rainfall in February caused the initial planting dates to be moved to March, which was not desirable due to day temperatures rising above optimal growing conditions for radishes.

Second, there was additional heavy rainfall in March after planting that resulted in flooding at the trial site in Kibler. The field was flooded for several hours and washed away some of the shoulders of the raised beds exposing the radish roots. This resulted in less than ideal growing conditions and in the low yields and high cull rates observed at the Kibler site.

Third, Arkansas experienced freezing temperatures later in the year than what has been the “normal” over the past few years. There were several evenings during March and April that the temperatures dropped to 32°F or below. It is believed that this delayed the maturity of the crop and consequently resulted in a later harvesting date than what would be typical.

Fourth, the heavy rainfall in April caused the radish roots to absorb large amounts of water that resulted in several roots splitting. Consequently, this increased the amount of culls.

A small taste test (three people) was conducted to determine how varieties compared for flavor attributes. The top two favorites were Sora and Cherry Bell. Both of these were ranked as a mild flavor with good texture. The top 2 least favorites was Mardi Gras and Valentine.  Mardi Gras was ranked as a bland flavor and Valentine was the opposite with it being described as too hot by our taste testers. These two varieties were also noted to be courser in texture, however this may be due to these two varieties not developing to their mature size (see variety photos). 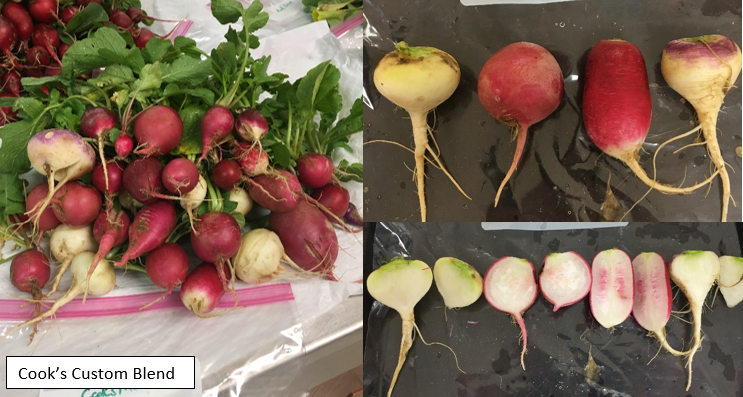 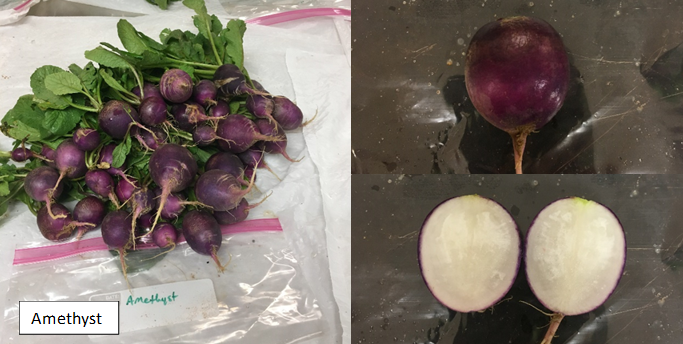 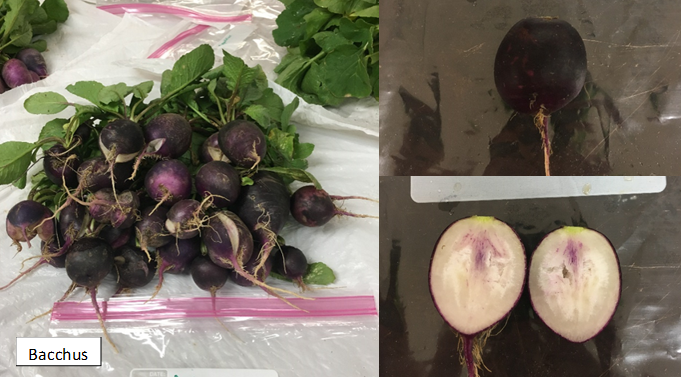 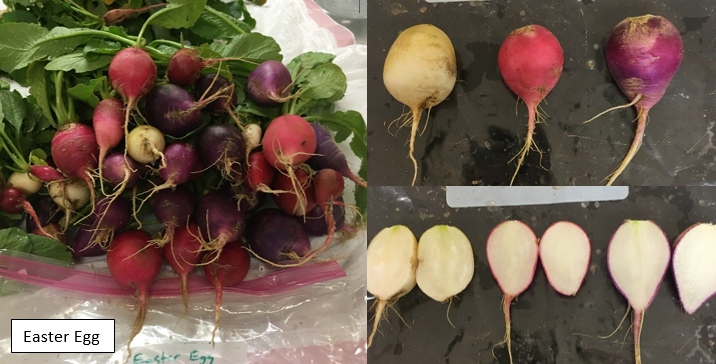 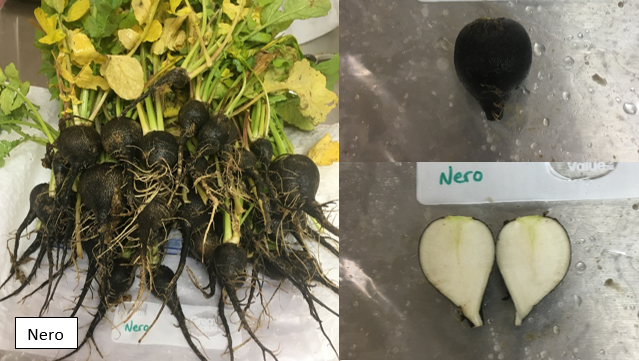 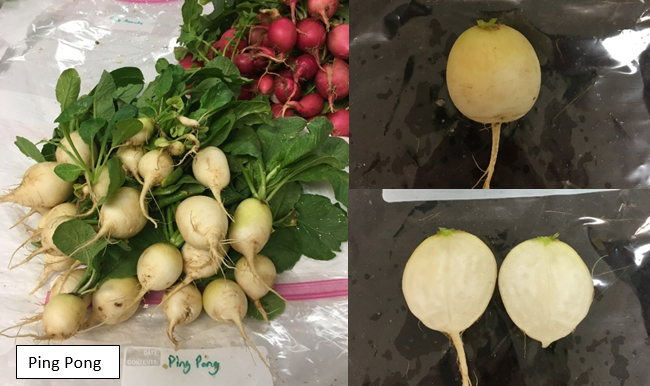 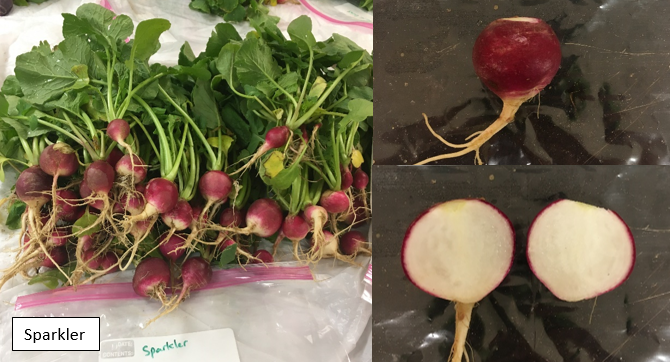 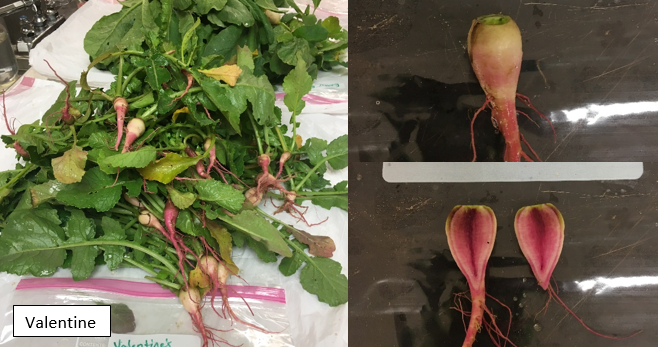 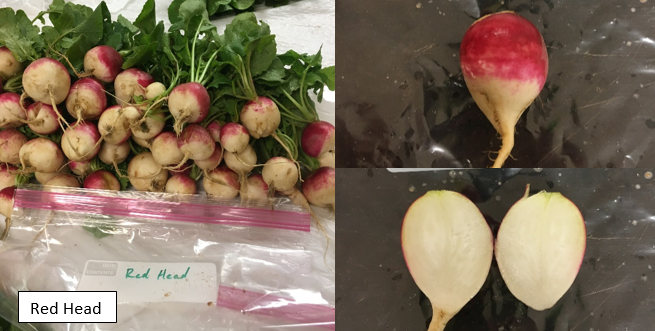