A field trial was conducted in the summer of 2017 at the University of Arkansas Southwest Research and Extension Center (SWREC) in Hope, Arkansas that trialed six pumpkin varieties.

This trial was conducted in conjunction with Dr. Jackie Lee who was evaluating different herbicides for weed suppression in pumpkins. Results from the herbicide trial will be posted separately.

Pumpkin transplants were seeded in late April and transplanted (48 plants per variety) to the field on June 1, 2017.

Irrigation was applied to the plants on as needed basis. The trial was located on a fine sandy loam and received 15.51 inches rainfall during the growing season, this was several inches above the seasonal average.

Harvest began on August 8, 2017 and continued for a two week period. Each variety was harvested and compared to the advertised yield for that variety and pumpkins were divided into different weight classes to determine what percentage of the crop could be marketed in 36 inch commercial bins. 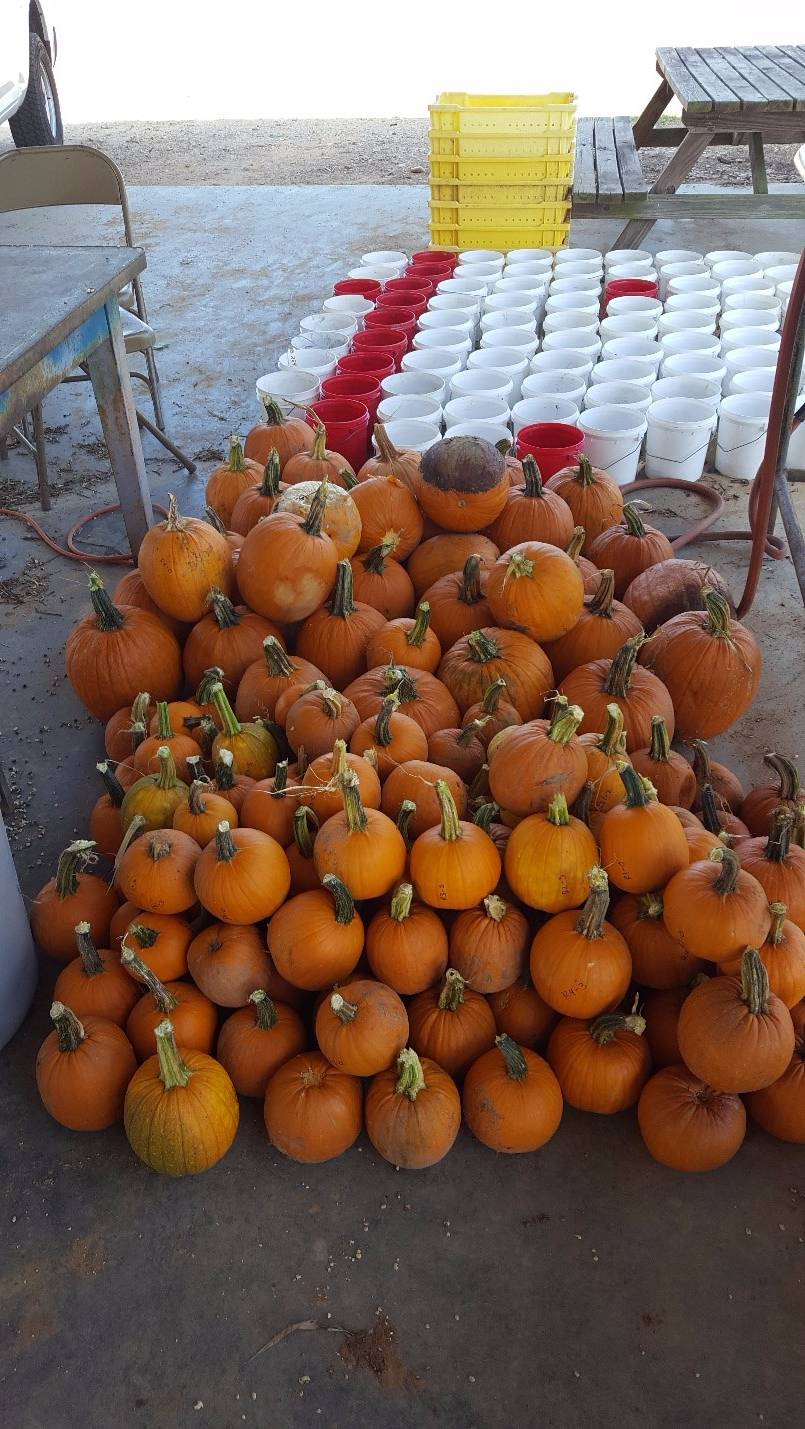 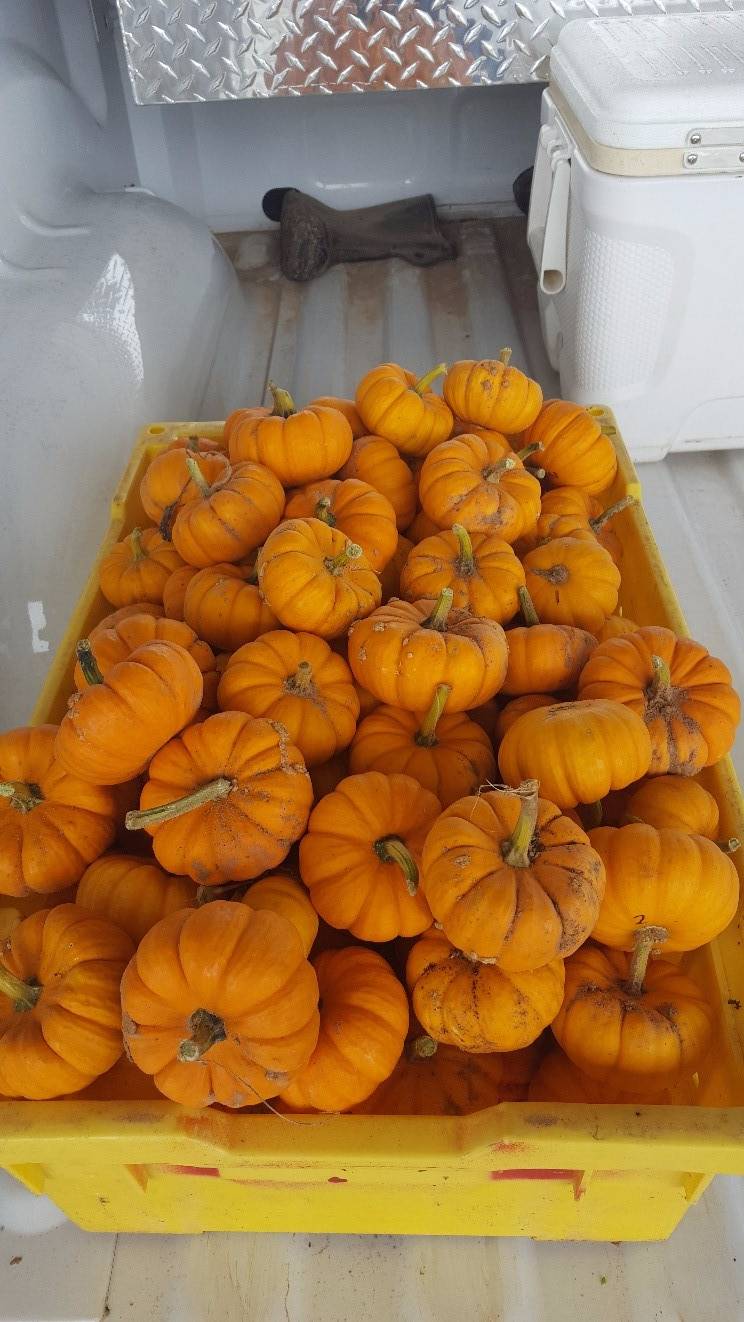 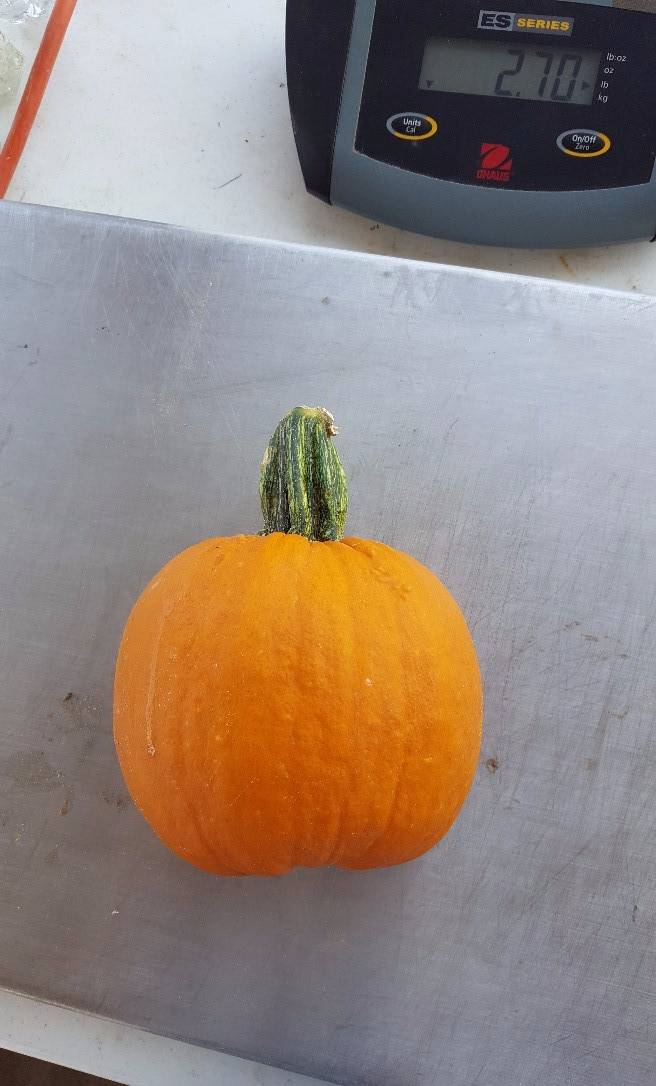 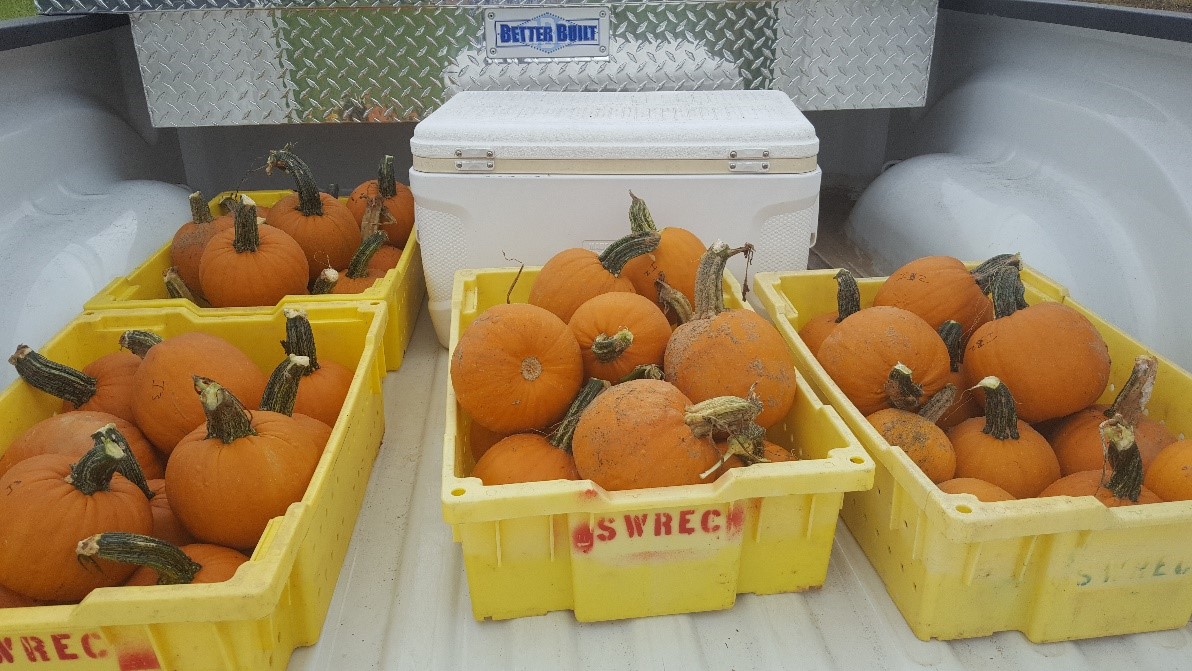 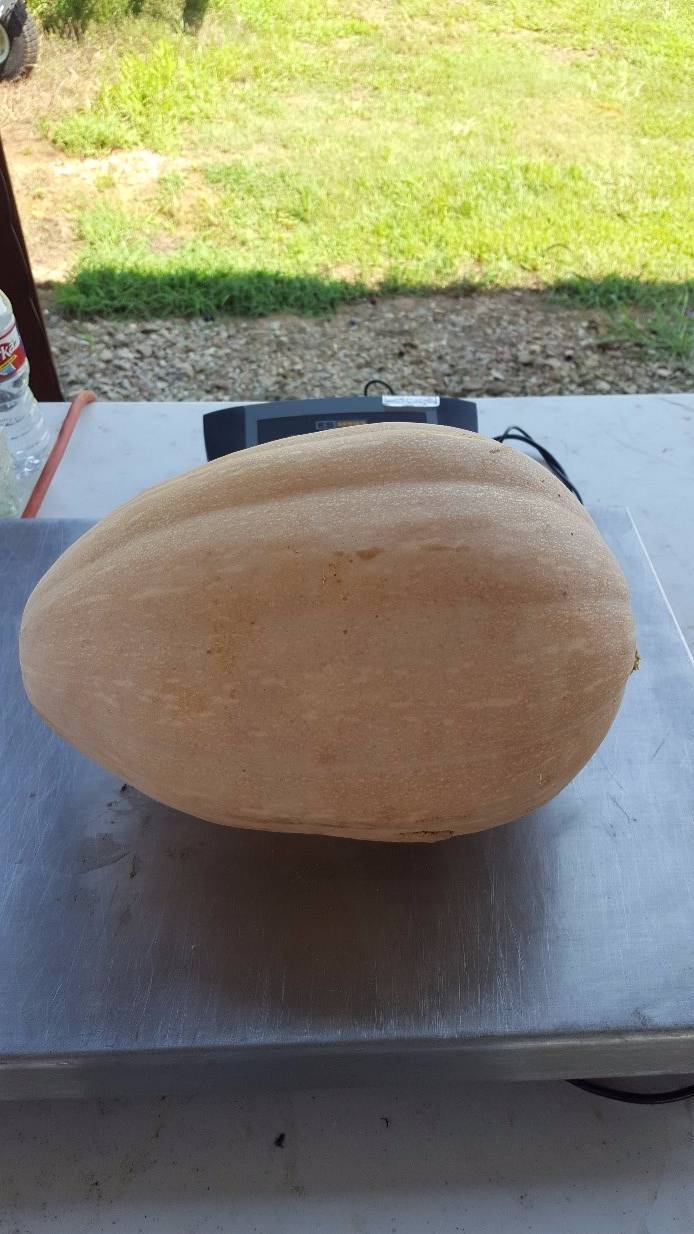 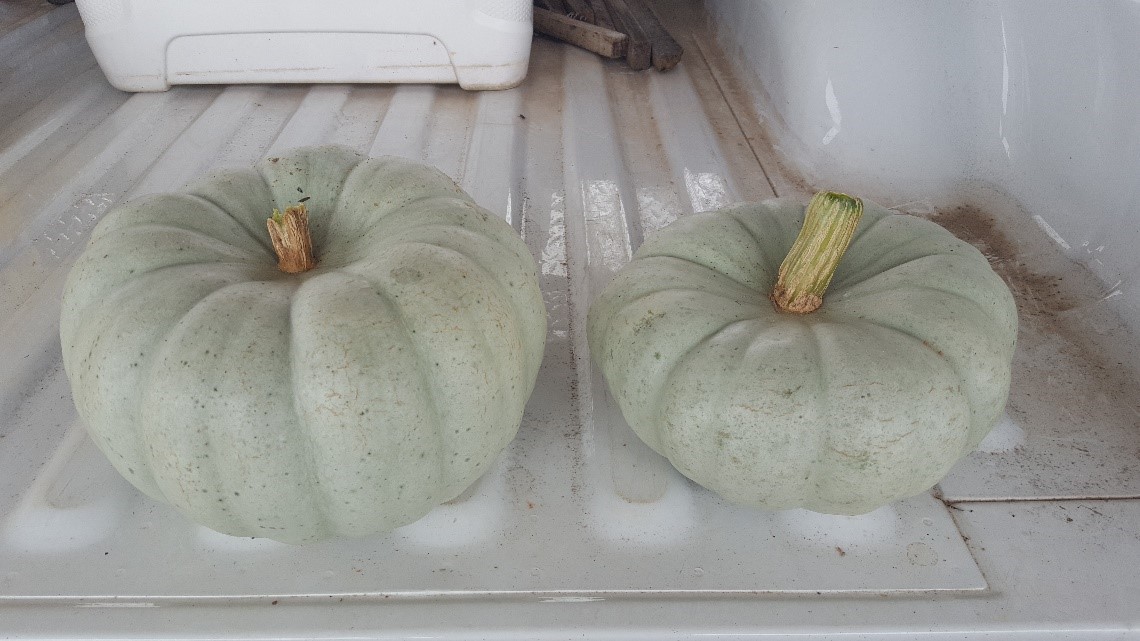 For all of the varieties we evaluated, the average pumpkin fruit weights were average to below average as compared to the seed catalog advertised fruit weights (Tables 1-3).

Commercial Marketability of the Harvest

The majority of the pumpkins harvested on this trial were of marketable size and weight (Figure1 and Table 3). The two varieties that had a high percentage of unmarketable (rotting or extremely small fruits) weights were ‘Gladiator’ (32.4% of fruits) and ‘Dickinson’ (25.0% of fruits). The remaining four varieties produced well in quantity and marketability. The results of pumpkin size distribution for each variety and % of unmarketable fruits are shown in Figure 1 below.

‘Iron man’ and ‘Munchkin’ both produced very consistently small sized pumpkins, and had high fruit per plant production. These two varieties would work well for an Agro tourism operations that hosts school tours and give pumpkins to the children who visit. ‘Jack sprat’ had slightly more variability in the size of pumpkins it produced and lower numbers of fruit produced per plant. Results from this 1 year trial would suggest ‘Iron man’ would be preferable over ‘Jack Sprat’ in the 2-3lb sized pumpkin category.

‘Jarrahdale’ produced nice ornamental pumpkins with good shelf life. As of this writing I (Amanda) have had one of these sitting on my front porch since early August and it shown no sign of deterioration. However, this variety produced smaller than advertised pumpkins under the conditions of this study.

Overall ‘Dickinson’ did not produce well, this variety was trialed because it is the processing variety typically used in “canned pumpkin”. 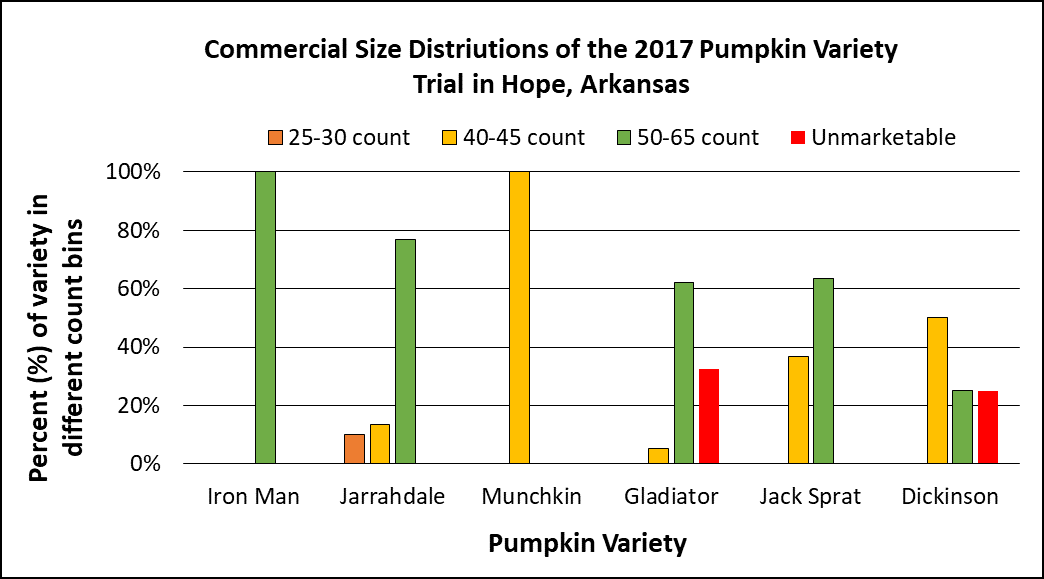 These preliminary results indicate that pumpkin production under reduced management practices is capable of producing average pumpkin yields in the Southwestern part of Arkansas in a cooler and wetter than average summer season. The observed below average weights or unmarketable weights could be explained by the amount of precipitation that was received during the two week harvest period. The site received 4.52 inches of precipitation in the month of August which is 1.48 inches more than the monthly average. No major diseases or pests were observed throughout the growing season; however, the high rainfall caused one end of the field to flood. It is believed that the flooding may have stunted the plants and subsequently reduced fruit yield. It was observed that the increase in moisture caused some pumpkins to begin to rot. For this reason some pumpkin varieties were harvested somewhat early to avoid losing more fruits to rot.

The planting date used in this trial was not typical of what a grower would use in order to target the Fall/Halloween market. Our early planting date and cooler than average temperatures in the month of July, that were conducive to crop growth, may explain the rapid development of several varieties in less time than the advertised ‘days to harvest’. 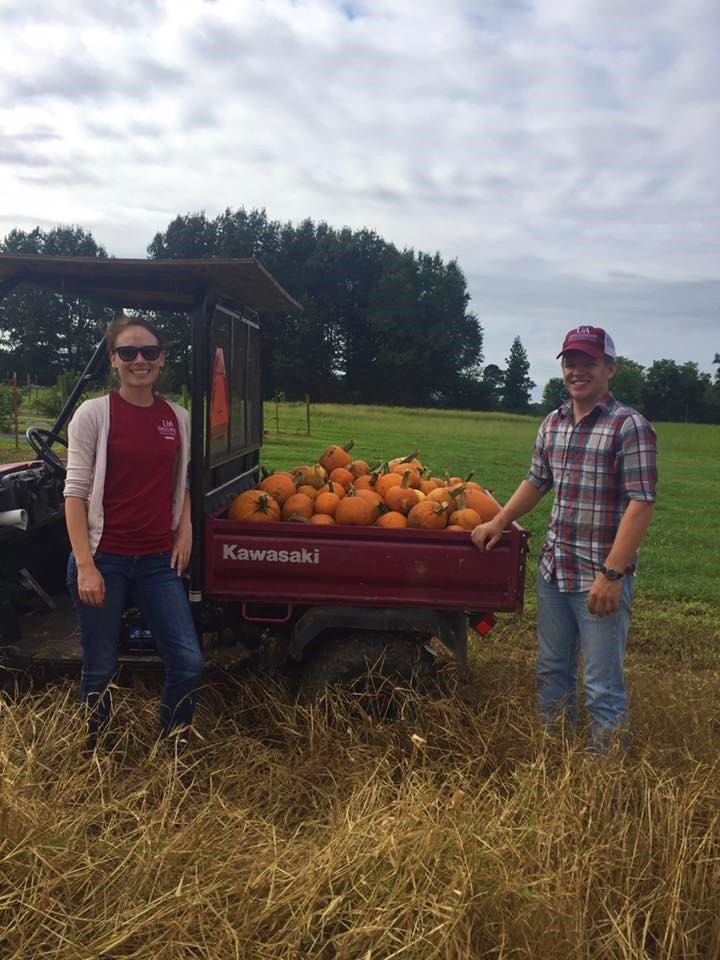 A special thank you is owed to Clay Wingfield, Mike McCorkle, and Vicki Bennett at the SWREC for their help in managing trial!