Coyotes in the Melon Patch
skip to main content
Horticulture

Coyotes in the Melon Patch 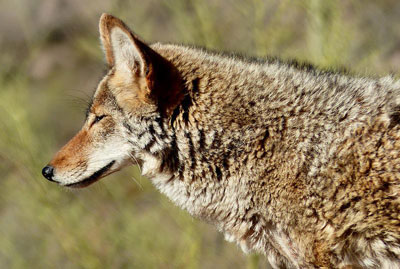 A coyote hungrily looks at a watermelon patch.

The calls are coming in about melon patches being ruined overnight.  Despite their reputation for grabbing small animals, coyotes also love juicy watermelons, especially in dry summer weather, just like humans do. The damage to watermelon crops can be extensive, with reports of coyotes eating as many as 20 melons in one night being common. If you have a backyard garden with just a few vines planted, one coyote could destroy your entire crop rather quickly.

What do coyotes eat?

Coyotes often include many items in their diet. Rabbits top the list of their dietary components. Carrion, rodents, ungulates (usually fawns), insects (such as grasshoppers), as well as livestock and poultry, are also consumed. 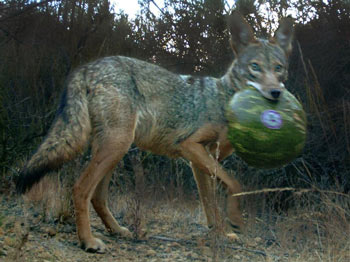 Coyotes readily eat fruits such as watermelons, berries, and other vegetative matter when they are available. Photo courtesty: National Parks Traveler

In some areas, coyotes feed on human refuse at dump sites and take pets (cats and small dogs).

Coyotes are most active at night and during early morning hours (especially where human activity occurs), and during hot summer weather. Where there is minimal human interference and during cool weather, they may be active throughout the day. Their physical abilities include good eyesight and hearing and a keen sense of smell. Distemper, hepatitis, parvo virus, and mange (caused by parasitic mites) are among the most common coyote diseases. Rabies and tularemia also occur and may be transmitted to other animals and humans. Coyotes harbor numerous parasites including mites, ticks, fleas, worms, and flukes.

For managing coyote damage, a variety of control methods must be available since no single method is effective in every situation. Success usually involves an integrated approach, combining good husbandry practices with effective control methods for short periods of time. Regardless of the means used to stop damage, the focus should be on damage prevention and control rather than the elimination of coyotes. It is neither wise nor practical to kill all coyotes. Methods could be net-wire fencing, electrical fencing, electrical modification of existing fencing, lights, bells and radios, repellents, guard animals, and many types of trapping.