The brown recluse spider is one of several venomous spiders in the United States whose bite can cause a severe reaction. This spider can become a problem not only for homeowners but also for pest control operators doing inspections or providing other services in crawl spaces, basements, attics and outbuildings.

This spider can be difficult to control without a thorough understanding of its habits.

How do I identify a brown recluse?

The brown recluse spider is a native species and is one of several similar-looking fiddleback, violin or brown spiders in the genus Loxosceles found in the United States. The brown recluse is a medium-sized, soft-bodied spider 1/4 to 1/2 inch long with leg span about the size of a half dollar. The males are slightly smaller than the females. 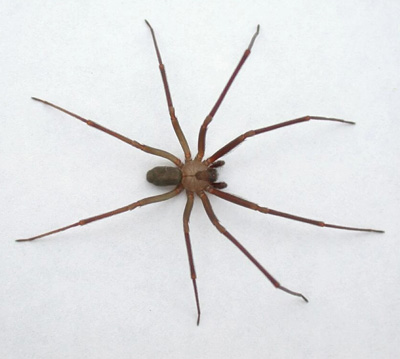 The brown recluse is yellowish tan to brown with no obvious pattern, while the base of the legs are yellow-orange in color. Although the legs are covered with very minute brown hairs, they appear bare to the naked eye. Each foot has two claws. The legs of the adult are 1 inch or more and gradually taper. The third pair of legs is the shortest.

The brown recluse spider spins small, loose, white to off-white webs with irregular strands without a definite pattern. It can be a “cobweb-type” webbing, which is used primarily as a retreat for the spider rather than a trap for prey. Indoors, the web can be somewhat flattened and is usually found against a wall or ceiling in an undisturbed corner of a room. Outdoors, the brown recluse spider spins a tube or cocoonlike web of thick silk for the winter.

What does the brown recluse feed on?

The brown recluse feeds on a wide variety of small insects. It is active primarily at night and will stalk prey in the open. During the day, it hides in dark niches and corners, hence its name. Cockroaches and other household insect pests can readily sustain spider infestations indoors. The brown recluse can survive long periods without food.

How many eggs do they produce?

The female lays eggs from May through August in sacs containing 40 or more eggs. A female will bear as many as 300 eggs during her lifetime. These spiders mature in about 11 months and may live as long as four years.

In what states can you find the brown recluse?

The brown recluse is found mainly in the Midwestern and Southern states but has been spreading into the Middle Atlantic states. This spider is a serious problem in Oklahoma, Missouri, Arkansas, and Kansas and in parts of the surrounding states. It has also been reported in California, Wyoming, Arizona, Florida, Washington, D.C., and in other locations. However, it should be remembered that a complex of fiddleback spiders can be found in these areas that can be easily confused with the more dangerous brown recluse.

Both the female and the male brown recluse have the ability to bite and inject venom. The brown recluse is not aggressive and usually retreats from situations that may be threatening. However, it usually bites when it is disturbed or is being crushed.

Fangs of recluses are so weak they cannot penetrate any clothing, that's why bites most often happen in situations where bare skin is pressed against these spiders such as putting on clothing, getting into an infested bed, or putting hands directly onto them.

What parts of the body do the bites usually occur?

Most bites occur on the hands and arms when people put on clothing that has been stored or when they roll over in bed. The bite is usually not felt but may cause a stinging sensation.

What the symptoms of a bite?

The victim may not be aware of the bite for one to three hours. This is followed by a small blister, local swelling and mild to severe pain two to eight hours later. The person who is bitten may become restless, feverish and have difficulty sleeping. The local pain is frequently quite intense, and the area surrounding the bite remains congested and hard to the touch for some time. The tissue affected locally by the venom is killed and gradually sloughs away, exposing the underlying muscles. The edges of the wound thicken and are raised, while the central area is filled by dense scar tissue.

Healing takes place quite slowly and may take six to eight weeks. The end result is a sunken scar, which has been described as resembling a “hole punched or scooped from the body.” Scars ranging from the size of a penny to half-dollar have been reported.

Only about 35% of bite victims experience necrotic symptoms from the venom, most have a far less serious experience. However, in some cases, a general systemic reaction has also occurred. In one case, the person who was bitten broke out with a rash resembling that of scarlet fever. In another case, the kidneys were apparently affected, causing bloody urine to be passed. These systemic disturbances probably occur infrequently and are the result of a “full” bite (i.e., the injection of a maximum amount of venom) or extreme sensitivity to the venom.

What should I do if I was bitten by a brown recluse?

How can I get rid of brown recluse spiders?

The best controls for recluses are exclusion, sticky traps, and "good" spiders that are likely to eat recluses or the prey they are after. Since they walk on their toes, and are rather sedentary in general, sprays often do not contact them well enough to maintain efficacy.