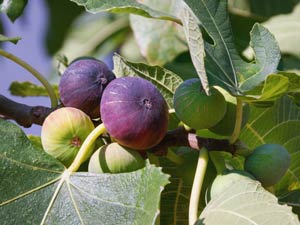 For many gardeners, the winter event we had in February was devastating to their figs. The fig harvest will be lowered due to the winter damage. However, they are rebounding and the plant itself does a remarkable job of overcoming the freeze damage. Hopefully, next season our figs will be bountiful again.

The common fig (Ficus carica) can be grown throughout Arkansas, but hardiness does vary within cultivars. Figs are considered a deciduous tree, but in colder climates they are often relegated to large bushes, since they can be killed back with temperature much below 15 degrees.

Figs are a member of the mulberry family (Moracae) and are related to many familiar houseplants including weeping fig (Ficus benjamina), rubber tree (Ficus elastica) and the fiddleleaf fig (Ficus lyrata). Our edible fig is the only hardy member of the Ficus genus and the only one that produces an edible fruit. The fig is one of the oldest fruit crops known to man, and it has long been grown in the South. If they suffer no winter damage, figs can reach a height of 25 or 30 feet tall and equally as wide. If space is limited, they can be pruned to maintain a more reasonable size. Even if they do get frozen back to the soil line- they will typically re-sprout from the root system and may bear some fruit that year, since they do bear figs on the current season growth. There are four distinct horticultural types of figs, but in our climate only the common figs can be grown.

What types of fig varieties grow well in Arkansas?

There are several common fig varieties that grow well in Arkansas and are readily available. In California, Greece and other climates, there are other species of figs which need small wasps to enter into the fig to pollinate the fruit, but we don’t grow those types in Arkansas.

While there are over 700 fig cultivars listed, only about 50 are offered in the nursery trade in the United States. There is quite a bit of name confusion amongst fig cultivars so don’t be surprised to see the same plant grown with several names.

The two most common varieties of figs you can find in Arkansas are Celeste and Brown Turkey, but there is some research going on in Arkansas to look at other cultivars. Celeste is the most cold hardy of the figs we grow. It produces a small brown fig. It ripens usually before Brown Turkey and has a tightly closed eye on the end of the fruit which can prevent the fruit beetle or fruit souring. Fruit souring is a condition that occurs when water enters the “eye” of the fig. Although Celeste is more cold-tolerant than

Brown Turkey, it does not rebound as quickly from winter damage or heavy pruning. If you severely prune a Celeste fig in late winter, it will greatly limit your crop of fruit that season. Brown Turkey (also called Texas Everbearing) ripens a few weeks after Celeste. While Brown Turkey is a little less hardy than Celeste, it tends to bear more fruit even when it is winter damaged or severely pruned, tending to rebound faster. It also bears for a relatively long period of time.

While we rarely have a wet summer, this year with all the rain we might see some fruit cracking and souring—a condition causing the fruit to rot when rain gets in at the “eye” of the fruit. Fruit souring tends to be worse when the rain is followed by high temperatures.

Figs will produce best when planted in a well-drained soil in full sun. They have a fibrous, shallow root system which makes them sensitive to drought stress. If your fig tree gets too dry, it can drop fruit. Fruit drop can be caused by several things, including dry conditions, but also storms, cool weather soon after fruit set and weak trees.

Our rollercoaster winter weather with swings in winter temperatures can lead to mild to severe winter injury-most commonly occurring in the northern counties in Arkansas. The further north you live in the state, the more protection the tree may need, but it still needs a minimum of 6 – 8 hours of sunlight if you hope to harvest fruit.

Planting on the east side of the house or with a rock or brick wall at their back to block the winds and radiate the heat will offer some protection from cold weather.

Are figs easy to propagate?

Figs are easily propagated by cuttings or layering branches of an existing fig tree down into the soil. If you want to purchase and plant some new fig trees, plant them in late winter through late spring to allow time to get them established before they have to contend with winter weather.

The common fig fruit is unique. It is called parthenocarpic, meaning the fruit is formed without being pollinated. Unlike most fruit in which the fruit we eat is the matured ovary tissue resulting from fertilization, the fig's edible structure is actually fleshy stem tissue.

The fig fruit is an inverted flower which contains the flower parts enclosed in stem tissue—the blossom is inside the fruit. This structure is known botanically as a syconium. At maturity the interior of the fig contains only the remains of these flower structures, including the small crunchy structures commonly called seeds. Actually, these so-called seeds usually are nothing more than unfertilized ovaries that failed to develop.

In milder climates, figs can produce two crops of figs. One crop is set at the end of the season and is supposed to overwinter on the trees and be harvested in early spring. This crop is called the “breba” crop. Rarely do any breba figs persist and thrive overwinter in Arkansas. The second crop is what is produced on the current season growth, and that is predominantly what we harvest in Arkansas.

Fig trees produce large somewhat tropical looking leaves with five rounded lobes and can serve as an edible ornamental. Figs have very few pests and don’t require rigorous spray schedules like other tree fruits; in fact, they normally don’t require any spraying and can be grown completely "organically".

Figs can produce a lot of fruit and when they are in production, daily picking may be needed. The trees do produce a white latex sap which can cause irritation on the skin with sensitive people. If you experience problems, wear gloves when picking.

Figs must be ripened on the tree and are quite perishable. Birds, squirrels, and raccoons like figs just as much as people do. Bird netting can help.

You also want to keep the fruit picked often to prevent decaying or splitting fruit. This split or decayed fruit can attract wasps, bees, ants, and flies which can make future picking more difficult.

The University of Arkansas System Division of Agriculture is an equal opportunity/equal access/affirmative action institution. For more information you can contact your local county extension service, you can also follow Sherri Sanders on Facebook @UADA.WhiteCountyAgriculture.