Searcy, Ark. – Gardening has both rewards and challenges, and one of the biggest challenges every year is weeds. No matter how bad weather conditions get for growing plants, weeds seem to grow undaunted. Weeds are tough performers able to survive and thrive in a wide range of growing conditions. 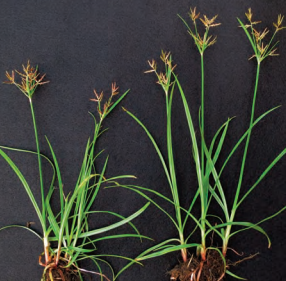 Learning to identify the weeds you have is often the first step to controlling them. If you can catch them as they are getting started, you may be able to limit their spread and return.

I often recommend the best method for weed control in a vegetable and flower garden is the Santa Clause method—Hoe, Hoe, Hoe, but there are herbicides that can control them. If you do opt for chemical control, know there are differences in what can be sprayed around ornamentals, turf and edibles.

Summer weeds can be divided into annuals and perennials. While the annuals are just here for one season, they often aggressively set seeds providing an unhappy return the next season. Perennials can also set seeds, but they come back from their root system as well, often making them more difficult to kill.

There are a whole host of weeds which live and thrive in Arkansas gardens and lawns. Learning to recognize them and get rid of them when you see them is step one. Some sound management practices will also be a step in the right direction--maintaining a dense lawn to outcompete lawn weeds, mulching flower and vegetable gardens, and healthy management of all gardens will help. No matter how good a gardener you are, no garden will ever be weed free 100% of the time, but ignorance is not bliss, it will simply allow your weeds to take over. So be diligent and watch for problems and handle them as quickly as you spot them.