Tomatoes or Potatoes? What is this fruit on my potato plant?
skip to main content
Horticulture

Tomatoes or Potatoes? What is this fruit on my potato plant?

Our office has received some curious calls lately. Gardeners have been surprised this year to find fruit produced on tops of their potato plants. Folks are surprised to see plants resembling cherry tomatoes come up where they planted potatoes.

Some have seen the small, tomato-like blossoms and now we’re receiving questions from a few people who are noticing the fruit that looks like green cherry tomatoes at the top of the plants.

Here’s the low down on this phenomenon.

Potatoes belong to a small family, the Nightshade or Solanaceous family. The other members are tomatoes, peppers and eggplants. Potatoes resemble tomatoes more than the other family members and often share the same disease and insects. Occasionally, you will see ads in garden magazines for a grafted tomato-potato plant “TomTato”, that produces tomatoes on the top and potatoes in the soil.  This grafted plant does not produce many of either. It’s considered a novelty plant.

However, I’m not referring to the grafted plants in this article. I’m discussing fruits growing at the top of a potato plant that naturally occurred. Potato flowers and fruit are produced because potatoes multiply by seed. The edible part of the potato plant is a tuber connected to the roots of the plant. While you can cut up the potato into plantable chunks and get more potatoes, the tubers themselves are not seeds, even though the ones you plant are called seed potatoes. The true seeds of the plant appear only rarely, in round, green seed pods. It shouldn't be surprising that these seed pods look like tomatoes because potatoes and tomatoes (Solanum lycopersicum) are members of the same plant family. Potato flowers look very much like tomato flowers except instead of being yellow, the potato flowers can be white or lavender or pink. It depends on the type of potato as to the flower color.

Typically those blooms are aborted and never have the opportunity to go from flower to fruit. The weather conditions have allowed the flowers to remain, pollinate and grow into small potato fruit. These look like small, round or oblong cherry tomatoes and usually appear in clusters. Those round seed pods are also called potato fruit, potato berries and seed balls. The interior of a seed pod has up to 500 tiny seeds distributed throughout a mass of moist tissue.

Using potato seeds instead of seed potatoes is comparable to fruit tree growers using fruit seeds to grow trees instead of grafting scions onto rootstock. Seed potatoes give you potatoes that have the desirable qualities of specific varieties, while potato seeds provide us with potential new varieties but let the professionals handle that. 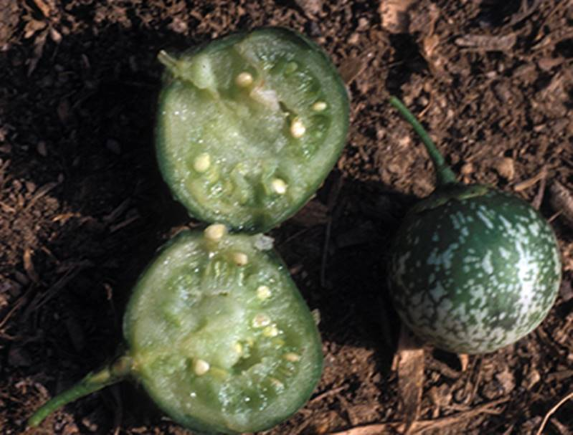 These potato fruits are not edible. In fact, they are poisonous. They contain high amounts of solanine that can make a person very ill. Solanine is also found in potatoes that are dug, left in the sun and the skin turns green. Besides being very bitter, eating plant parts containing solanine can lead to headache, abdominal pain, shock and diarrhea. If you’re growing potatoes in an area that small children can get into, and these fruits appear on your potato plants, keep kids out of the area until the potatoes are harvested or discard the potato fruit.

If you saved the ripe seeds inside the potato fruit, you would not get the same kind of potatoes as the parent plant. It would take several years to grow these to a size that you could harvest. The only people saving, and planting potato seeds are growers and breeders who are hoping to produce a new variety of potato. My advice is let them do it!

The University of Arkansas System, Division of Agriculture is an equal opportunity/equal access/affirmative action institution.