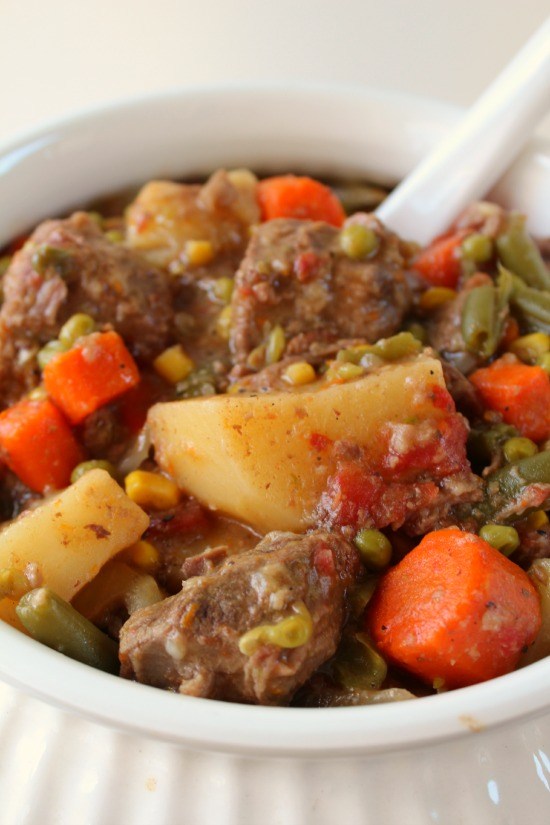 Stew cooks in one pan so there is little clean up, plus it makes for great leftovers.

There’s something about fall that brings thoughts of football and cool, crisp fall temperatures. This is also the time when I think of a hearty, nutritious bowl of stew simmering on the stove. Stews are comfort food. What is more comforting than a steaming hot bowl of thick sauce, chunks of meat and vegetables infused with flavor?

Stews are any dish made by stewing, a method of cooking by which food is barely covered with liquid and simmered slowly for a long period of time in a tightly covered pot. Stewing not only tenderizes tough pieces of meat but also allows the flavors of the ingredients to blend.

What kind of meat should I use?

Lean cuts of meat can mean you may end up with tough meat in your stew. Cheaper cuts of meat are best, since most of them cook better in liquid. I purchase beef stew meat for my beef stew. The butcher has taken chunks of beef from the tougher parts of the cow such as the shoulder, leg, and butt, and cubed them. As tougher cuts of meat simmer, they become tender and add great flavor to the stew.

Sauté any fresh onions, garlic or shallots to add a rich caramelized flavor and smell to the stew.  Remove them from the pan once caramelized or they will continue to cook.

What does dredging the meat in flour actually do?

If your recipe asks you to dredge the meat in flour, it means to coat the meat pieces in a flour crust which, when seared, will seal the juices inside the meat and provide a tasty crust. As an added bonus, the flour pieces make a roux to help thicken the stew.

When browning the dredged pieces of meat, be sure that there is a thin layer of oil in the bottom of the pan, and cook the meat over medium high heat. This assures that the edges of the meat sear quickly, but the meat is still uncooked. Do not overcrowd the pan with meat.

While you are browning the meat, you should see the bottom of the pan develop a thick coating. This will provide flavor to the stew; be careful not to let it burn. Once lightly browned on all sides, remove it from the pan and begin to deglaze the pan.

What does deglazing mean?

Deglaze means to add liquid to the pan and boil while you scrap the browned bits on the bottom of the pan. The bits will provide flavor to the gravy and generally dissolve during the cooking process.

How do I get tender pieces of meat?

After deglazing the pot return the meat, caramelized vegetables, and liquid to the Dutch oven. The secret to great stew is to simmer, not boil, the liquid. Since stews are best made with tougher, less expensive cuts of meat, slow cooking over low heat will allow the liquid to break down the tissue in the meat to tender morsels. Cooking it fast will yield firm tough, chucks of meat.

When should I add the veggies?

While some cooks add their vegetables at the beginning of the cooking time, it is actually better to wait until the meat has had a chance to simmer. This keeps the vegetables from being overcooked. You want the meat to be fork tender and the vegetables to retain their shape.

Stew cooks in one pan so there is little clean up, and it makes excellent leftovers. In fact, many times the stew is better the next day because the flavors have time to blend together.

I love to make Beef Stew with a Kick when it starts getting cool outside. Don’t let the ingredient list scare you; it’s fast, easy and permeates the house with a wonderful aroma. Plus, leftovers are even better the next day. Feel free to substitute vegetables according to your families’ preference.

Beef Stew with a Kick