Dressing or Stuffing - Which Team Are You On?
skip to main content
FCS

Dressing or Stuffing - Which Team Are You On? 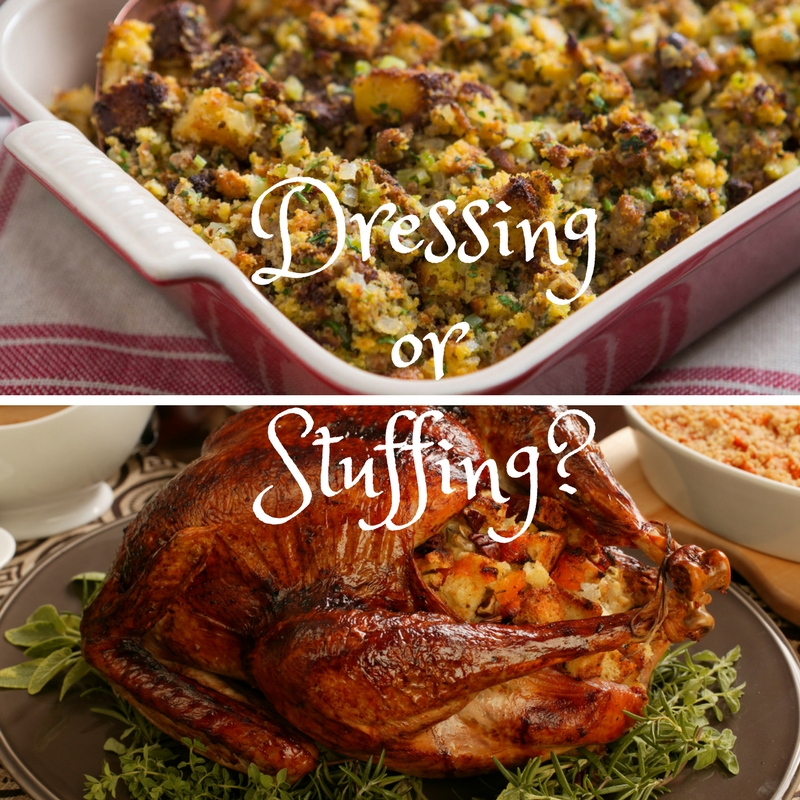 Are you on Team Dressing or Team Stuffing?

Are you on Team Dressing or Team Stuffing? It probably depends upon where you were raised. If you call it dressing, odds are you cook it separately from the turkey in a side dish, and you live in the southern region of the United States. Otherwise, you re likely a stuffing family, and you cook it in the turkey. One thing we likely can all agree upon is that it would not be Thanksgiving without it.

I grew up on Team Dressing. That is all I have known. My grandmother made a huge roaster pan full every year, and then plated it into a bowl to serve on the table. She started days earlier cooking her cornbread to serve as the base. No white bread or bread crumbs in her dressing. Then she chopped her onions and celery and made her chicken broth. It was always a treat and I wondered why we only had it at Thanksgiving, but I digress.

To many, dressing or stuffing depends upon where you grew up at Many say that it depends upon the bird; was it cooked inside the bird or outside? Inside the bird and it’s stuffing; outside and it’s considered dressing. I personally think it is more of a geographical issue.

Go south of the Mason-Dixon Line and in the Midwest and many call it dressing, regardless of if it is prepared in the bird or alongside in a casserole dish. Likewise, northern or northeastern states and the west coast typically lean toward stuffing.

If your Thanksgiving table has friends and relatives around it from various regions of the country, chances are there may be a war of words on food terminology, as to whether it is stuffing or dressing. There likely will be some discussion on whether a certain side dish of starch and vegetables should be called “stuffing” or “dressing.”

Traditionally stuffing begins with sturdy white bread, while the most common ingredient in dressing is cornbread. However, that may not hold true either. While bread is the base for both dressing and stuffing, the rest may be as different as what you call it. You may find white bread mixed with saltine crackers, oysters in coastal communities, andouille sausage in Louisiana, or sourdough and mushrooms in California. Both likely have similar herbs such as sage, poultry seasoning and thyme, and onions and celery as a base.

Regardless of which side you are on, one thing we can all agree on is that this iconic dish is delicious and a Thanksgiving Day table would not be complete without it. This dressing recipe is one I have been making for several years now. It is a little different from others but it is a moist, wonderful dressing that will have everyone asking for seconds.

Bake 1 chicken or turkey rubbed with salt and pepper.  Reserve the broth.  If using a smoked turkey, use 1/2 to 1 can of chicken broth.

Sage, salt and pepper, to taste

1 can cream of chicken soup

Sauté the onion and celery in margarine. Allow to cool and lightly toss with mayonnaise. In a large mixing bowl, crumble cornbread. Pour reserved chicken broth over cornbread, until it is the consistency you like. (More broth equals moist dressing.) Sprinkle with sage, salt and pepper as desired. Mix in celery, onion and mayonnaise mixture, add chopped eggs. Beat together raw eggs and milk. Pour over mixture and stir. Pour into 9 x 13 inch baking dish that has been coated with non-stick cooking spray. Cover and refrigerate overnight.

When ready to bake dressing, spread with topping. Cover with foil and bake at 375 degrees for about 45 minutes to 1 hour or until lightly brown and firm.