How did anyone ever decide that eating black eyed peas on New Year’s Day would bring financial prosperity and good luck? 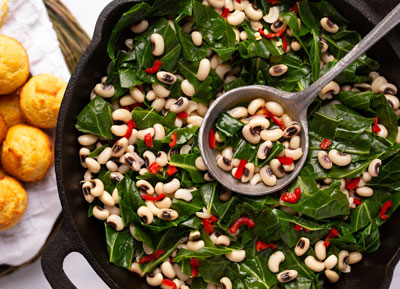 It is believed this tradition dates back to the Civil War. Union troops would strip the countryside of all food and livestock and destroy anything that they couldn’t carry away. In fact, black eye peas were the only food spared by General William T. Sherman and his Union troops. Since black-eyed peas were used strictly for the feeding of cattle in the South, the troops left these “field peas” behind for the animals.

During this time of battle, no supplies went in and none came out. The entire town was on the brink of starvation. So they ate those humble field peas, starting a southern tradition. Since black-eyed peas helped save surviving Confederates from starvation they were regarded as a symbol of good luck and financial prosperity. They are symbolic of money with their small, seed like appearance which resembles coins that swell when cooked so they are consumed with financial rewards in mind.

Black-eyed peas have a scented aroma, creamy texture and distinctive flavor. These beans are characterized by their kidney shaped, white skin with a small black eye and very fine wrinkles. Lucky for us, the black-eyed pea can be purchased fresh, frozen, canned or dried.

They can be enjoyed all throughout the year since they are relatively low in calories, high in fiber and an excellent source of calcium. In fact, a one cup serving will provide you with 130 calories, 211mg of calcium, 7 grams fiber, 4 grams protein, 209 mcg of Folate and 1,305 IU of Vitamin A.

Get your black eyed peas cooking now as part of your New Year’s meal to bring you prosperity and good luck!