Honey Versus Sugar-Which is Healthier? | Is honey healthier than sugar?
skip to main content
FCS

Honey Versus Sugar-Which is Healthier? 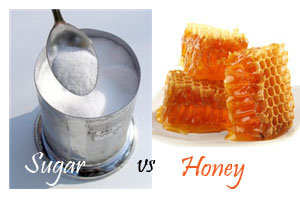 Honey is golden goodness harvested from hives of honeybees by beekeepers. It’s natural, pure and just downright delicious. If I could rename it, I would call it liquid sunshine. I keep a quart jar of local honey in my pantry for cooking and eating.

Honey is made by bees collecting the nectar produced by flowers and storing it in their hives to consume during winter or periods of drought. These industrious insects process the nectar by adding enzymes that chemically alter the sugar molecules, and removing most of the moisture from the solution. The resulting product - honey is thick and sweet.

Ever thought about becoming a beekeeper to get more honey to yourself? Check out our resources for beekeeping in Arkansas and get started!

How we use honey in food production

When food companies want to entice consumers to buy their sweetened products, they use terms such “honey sweetened”. Sometimes they do this even when sugar is the main sweetener, and honey is barely present, (remember the importance of label reading to get the real story.) Think breads, dry cereals, the list could go on. In fact, most people might consider it healthier than sugar.

Is there any scientific evidence to support that thought process and answer the question, is honey a healthier choice than sugar?

Honey is composed mostly of the monosaccharide molecules glucose and fructose, just like table sugar. It has higher moisture content than table sugar, about 18% water. The exact makeup of each individual honey varies somewhat, but honey is generally composed of 80% sugar (fructose & glucose), 2% minerals, vitamins, pollen & protein.

One tablespoon of honey contains 64 Calories. By contrast, a tablespoon of sugar contains 45 Calories. However, honey tastes sweeter than sugar, and people tend to use less, thereby saving calories.

The science of honey

In sugar, the fructose and glucose molecules are bound together chemically into a molecule called sucrose. Sugar is 100% sucrose.

Honey has trace amounts minerals and vitamins. This may be viewed as an advantage, but the values are so low that honey can’t really be considered a source of these nutrients.

For example, you would need to consume 40 cups of honey a day to reach your daily iron requirements.

If there is a negative side to honey it may be that honey may contain dormant bacteria called clostridium botulinum. Infant botulism is a unique form of food poisoning. Children under twelve months of age may not have a strong enough immune system or sufficient stomach acids to fend off this form of bacterial spore. When a young child eats the tainted honey, the bacterial spores activate and produce botulism food poisoning. Although the risk is very low, children should not be fed honey until they have reached one year of age to avoid potential food poisoning.

So is there a definitive answer to which is healthier, honey or sugar? Both should be consumed in limited amounts. Honey may have a slight edge, but excess consumption of either is more dangerous to your health than the advantage of choosing one over the other.