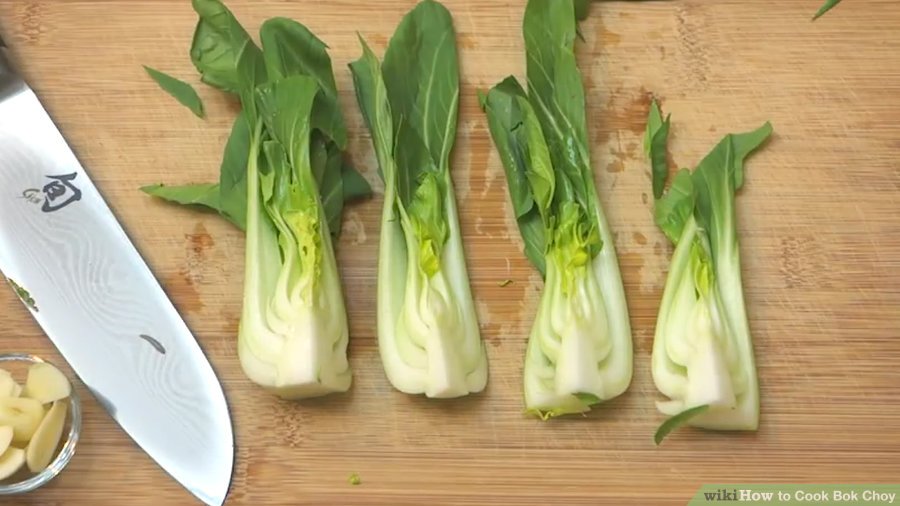 To use bok choy, chop off enough of the base so each stalk can be washed individually.

Bok choy has become widely available to consumers in the produce section of the local supermarket and farmers market. You may have noticed an odd-looking deep green leafy vegetable, resembling Romaine lettuce on top and a large celery on the bottom, and maybe you’ve even wondered what it was and what you do with it. The name “bok choy” originated from the Chinese word for "soup spoon" because of the shape of its leaves.

Bok Choy, a member of the Chinese cabbage family, is smaller and has wider leaves than most cabbage. The stalks are a pale green color and do not resemble other cabbages in taste or appearance. The stalks can be eaten raw with dip or chopped fresh for salads. Otherwise, depending on your recipe, you will want to cook it quickly so the stalks stay crisp and the leaves get tender. For stir-frying, add stalks first and green leaves a minute or two later, towards the end of cooking.

You may see Bok Choy advertised as several names, bak choi, paak choi, Chinese cabbage, or Peking cabbage. Although Bok Choy has been cultivated in China for centuries, it is now commonly grown in the US and is available year-round in supermarkets; it is available in the fall and spring months at our local farmers market.

Baby bok choy is a younger version of bok choy, and should also be purchased according to these standards. Once purchased, you can safely store them unwashed in your refrigerator up to a week, provided that you wrap it in paper towels or an unsealed plastic bag and store in the vegetable crisper section of the refrigerator.

To use bok choy, chop off enough of the base so that each stalk can be washed individually. Rinse stalks and leaves under running water, using a vegetable brush. When cooking mature bok choy, do not cook it whole; instead first remove leaves from the stalks and cut the stalks into pieces. Next, take the removed leaves and cut them into pieces as well. Both the stalk and leaves are edible.

Bok choy is very adaptable; it can be boiled, steamed, or stir-fried. In a stir-fry, cut off the stalks and slice. Cook for a couple of minutes and then add the leaves. If you need a quick recipe, chop and steam for 3-4 minutes and serve with soy sauce, ginger, or hot peppers.

The health benefits are many. A 3.5-ounce serving raw contains only 13 calories, as well as a wealth of vitamins C, A, and K, and are excellent sources of calcium, magnesium, potassium, manganese, and iron. It also contains 0 grams fat or cholesterol.

The Vitamin A found in Bok Choy is essential for a properly functioning immune system, while vitamin C is an antioxidant that shields the body from free radicals. The potassium helps healthy muscle and nerve function, and vitamin B6 is for carbohydrate, fat, and protein metabolism. Bok choy is quickly gaining popularity because of its nutritional value.

Because of Bok Choy’s nutritive value and ease of preparation, it is quickly becoming a tasty alternative to cabbage, as well as a healthy dietary addition. Instead of your traditional tossed green salad, try this Tossed Bok Choy Salad instead. You may find you have a new favorite.

¼ cup dried cranberries such as craisins

In a glass jar with a lid, mix together olive oil, vinegar, sugar, and soy sauce. Close the lid; shake until well mixed. Combine the bok choy, green onions, almonds, mandarin oranges and dried cranberries in a salad bowl. Toss with dressing, top with chow mein noodles and serve immediately.