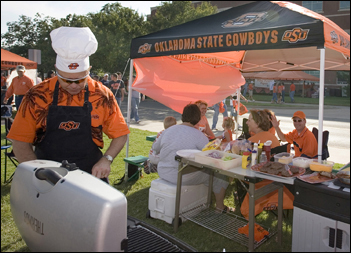 Tailgating brings another dimension to the game. There is nothing like the comradery, smells, and food but don't forget food safety when tailgating.

Football season is here and even more exciting than the game itself could be the tailgating. Tailgating is a social event held on and around the open tailgate of a vehicle at stadiums and arenas, before and occasionally after games. Fans attending such an event are said to be 'tailgating'.

Walking around the stadium before the game you will see the tailgaters and smell all the food being prepared, many times under a tent or canopy. Some have a big screen TV playing the pregame show, fans playing games such as corn hole, Frisbee, tossing the football and general fellowship.

Remember food safety when tailgating. Always carry cold perishable food like raw hamburger patties, sausages, and chicken in an insulated cooler packed with several inches of ice, frozen gel packs, or containers of ice. Pack a thermometer in the cooler to make sure the food stays at 40 °F or below. Raw meat and poultry should be wrapped securely and stored away from other foods to prevent their juices from cross-contaminating ready-to-eat food.

Perishable cooked food such as luncheon meat, cooked meat, chicken, and potato or pasta salads must be kept refrigerator cold, too.

Include clean utensils for preparing and serving. Chances are there will not be water available at the site so pack clean, wet, disposable cloths or moist towelettes and paper towels for cleaning hands and surfaces.

Never partially cook food at home so it grills faster at the tailgate party. Partially cooking meat or poultry ahead of time should only be done if the food goes immediately from the microwave or stove to the hot grill. Partial cooking of food without cooking it to a safe temperature allows harmful bacteria to survive and multiply.

Some people have so much fun at the tailgate party; they never actually watch the game. But that doesn't mean it's safe for the food to stay unrefrigerated before, during, and after the event. Holding food at an unsafe temperature is a prime cause of foodborne illness.

Store perishable food in the cooler except for brief times when serving. Cook only the amount of food that will be eaten to avoid the challenge of keeping leftovers at a safe temperature. Once finished, discard any leftovers that are not 40 °F or below after the game. Food should not be left out of the cooler or off the grill more than 2 hours – 1 hour when the outside temperature is above 90 °F.

Tailgating brings another dimension to the game. The comradery, smells, food; there is nothing like it. I will be tailgating this weekend as my favorite college team and alma mater kicks off their first home game. So if you happen to be in Stillwater, stop by and see me. We will be having Roasted Rosemary and Parmesan Cheese Corn on the Cob this weekend. Oh and Go Pokes!

If you have questions contact me at the University of Arkansas Division of Agriculture, Miller County Extension office in the courthouse, e-mail me at chaley@uada.edu or call 870-779-3609. You can also get great tips on facebook at UAEXMillerCountyFC twS and twitter at @MillerCountyFCS

Preheat an outdoor grill for medium-high heat and lightly oil grate. Brush a thin layer of mayonnaise on each ear of corn. Sprinkle the corn with Parmesan cheese, chili powder, salt, and pepper. Lay Rosemary sprig beside corn and wrap each ear with aluminum foil and place on the grill. Grill, turning occasionally, until the kernels begin to brown, about 10 minutes.