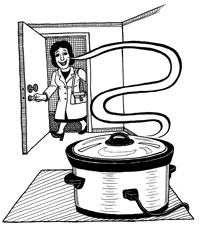 The slow cooker makes it possible to "prep it and forget it". Do the prep work before heading to work and return home to delicious aromas of an already-prepared nutritious dinner for your family.

I’ll admit I am not a big gadget or small appliance person. I don’t have the newest “got to have” kitchen item on the market; however, when I find one I like, I use it faithfully. For me that small appliance would have to be the slow cooker. Although I do have a new small appliance I really like and will share with you in the next couple of weeks!

In the 1930’s, Irving Naxon applied for a patent for a cooking device that would be a portable cooker. This device would have a cooking vessel (the crock) housed inside a casing with the heating element, which would allow the heat to distribute evenly. In the 1950’s the Naxon Beanery was introduced and by 1972, Rival Manufacturing acquired it and rebranded the Beanery as the Crock-Pot. Believe it or not, the appliance price has not varied much from the original retail price of $25 that it was introduced with in the early 1970’s.

Women discovered the slow cooker was both convenient – allowing you to make a one pot meal while at work – as well as energy efficient. This was important during the energy crisis of the 1970’s when everyone was looking for ways to conserve energy. They are reported to use about the same amount of energy as an incandescent light bulb, far less than the electricity required to run a traditional electric oven for any substantial amount of time.

A study in the early 2000’s determined that 80.6 percent of US homes owned a slow cooker. Consumers had already discovered the advantages of owning a slow cooker.

Other than the “prep it and forget it,” the ability to cook tough and cheap cuts of meat is enticing. Pork shoulder, beef chuck and brisket become fall apart tender; many times yielding better results than more expensive cuts of meat. This is because the long slow cooking method softens connective tissue without toughening the muscle, giving you a tender meat.

Even the most novice cook can use a slow cooker.

It’s practically impossible to burn anything in the slow cooker, but you can cook things too long and have the vegetables become tasteless or the texture too soft for your liking.

Some of the newer models allow you to bring food to a given temperature and then lower it, switching itself to warm mode to prevent over cooking, but allow it to stay safe until you are ready to serve it.

I love the ability to cook a meal in a single pot, meaning I have fewer dishes to wash. Plus the new disposable slow cooker liners make it pretty easy as well.

An appliance such as this also has some disadvantages.

I think I may have shared this recipe before because it is one of my favorite slow cooker recipes. They are so moist and tender that no knife is needed.