The southern root-knot nematode (Meloidogyne incognita) and the reniform nematode (Rotylenchulus reniformis) are the most economically important nematodes on cotton in Arkansas. Root-knot nematode (RKN) is commonly found in coarse textured soils whereas reniform nematode (RN) is often associated with soils with greater percentage of silt or clay.   Both species are widely distributed in the cotton growing areas of the state, and RKN has been reported in every cotton-producing county in Arkansas.  The highest RKN population densities have been reported in Ashley, Crittenden, Drew, Desha, Lafayette, Lincoln, Lonoke, Miller, Mississippi, and Phillips counties. Reniform nematodes have been reported in 12 Delta counties with the highest incidence in Monroe, Jefferson, and Ashley counties.

Foliar symptoms of RKN are often mistaken for nutritional deficiencies or soil compaction that results in incipient wilting, thin stands, or stunted cotton plants (Fig. 5). RKN causes diagnostic galls on primary and secondary roots (Fig. 6). Foliar symptoms of RN can be similar to those caused by RKN; however, galls are not produced on cotton roots (Fig. 6). Nematode issues are rarely diagnosed based on plant symptoms in the field, thus a soil samples is needed to identify nematode problems. 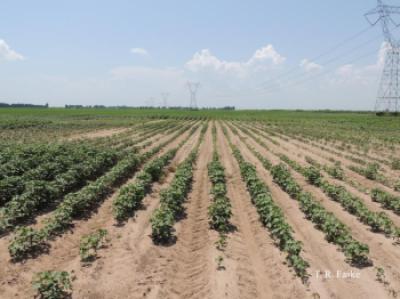 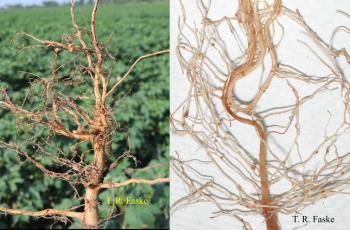 Soil samples should be taken in the late summer or fall (June to November) when population densities are highest after nematodes have reproduced on the existing crop. Collect 15 to 20 core samples with a ¾-in.-diam. soil probe 8 to 10-in deep within in the roots zone of symptomatic living plants. Combine the cores into one composite sample, and remove a one-pint subsample for the nematode assay. This sample should be placed in a plastic bag, labeled (identifying information on the outside of the bag) and tag and sealed. Protect samples from direct sunlight and excessive heat by storing them in an insulated ice chest (without ice). Samples may be held in an ice chest in a cool dry location (shaded floor of an air conditioned building) for a few days prior to shipping if necessary. Ship as soon as possible after collection and avoid delivery on weekends or holidays. Nematode samples should be sent to the Nematode Diagnostic Laboratory at 362 Highway 174 N., Hope, AR 71801. A small fee is required for nematode assays.

Management of plant-parasitic nematodes depends on species and population density.   Economic thresholds for RKN and RN on cotton are 50 and 1,000 nematodes/100 cc soil, respectively. Nematode population densities at or above these levels would likely cause a problem and management practices should be implemented.

Nematode management on cotton consists of cultural practices, resistant cultivars and nematicides. Cultural practices focus on reducing nematode population densities by using crop rotation with resistant or nonhost crops (Table 1). A two year rotation is best to reduce nematode population densities, which is often unattractive to producers, but can be a cost-effective approach over time.

Resistance is the most economical tactic to manage plant-parasitic nematodes. Cotton cultivars, Stoneville 5458B2RF, PhytoGen 367WNR, and Deltapine 174RF are adapted for production in AR and have a moderate level of resistance to RKN. Currently, there is no cotton cultivar with resistance to the reniform nematode.

Nematicides are popular tactics to manage cotton nematodes. Nematicides do not provide season long control of nematodes, thus it is recommended to utilize several management tactics to manage cotton nematodes.   A high population density of cotton nematodes is often needed for fumigants to be cost effective. Non-fumigants are applied at-plating in-furrow or seed treatment or foliar application. The granular nematicide, Aldicarb (Temik), was historically widely used in-furrow at-planting. However, the manufacture of Aldicarb was suspended in 2011 and, although the product may be applied on cotton through 2014, supplies are extremely limited. Seed treated with a nematicide provide some suppression of nematode infection during early root development. Seed treatments are most effective when there is a low level of cotton nematodes in the field. Oxamyl (Vydate) has been used as foliar spray early in the season (generally shortly before or at squaring) often in combination with seed treated with a nematicide.

Table 2. Nematicides labeled for use on cotton in Arkansas 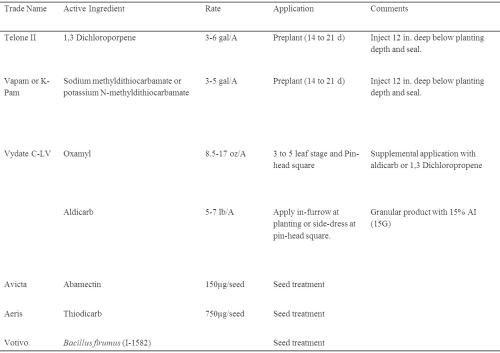