Seedling diseases are caused by several soilborne fungi, but the most common are Pythium spp., Rhizoctonia solani, Thielaviopsis basicola, and several species of Fusarium. These fungi cause pre-emergence and post-emergence damping off, and black root rot, especially when cool, wet conditions persist after planting. Seedlings infected with Pythium spp. rapidly collapse from root decay. Prior to complete collapse lesions on the radicle often have a soft watery appearance. Seedlings infected with R. solani exhibit a dark, sunken lesion at or below the soil line. Similarly, seedlings infected with Fusarium often have black to brown lesions on the hypocotyl and root system. Thus, a laboratory assay is necessary to identify seedling disease fungi. Cotton seedlings infected with T. basicola have a blackened root system and hypocotyl below soil line. Though not all these pathogens will be present in all fields, most cotton fields in Arkansas will have some of these pathogens. There is no host plant resistance for seedling diseases, thus management consist of fungicides and cultural practices. Fungicide seed treatments are the first line of defense in suppressing seedling disease especially when seeds are planted under in favorable soil conditions that promote rapid germination and seedling emergence. Additional applications of fungicides in-furrow at planting may occasionally provide additional seedling protection and assist in stand establishment, but specialized application equipment is necessary. Currently, there is no fungicide with good efficacy for black root rot.  Proper crop management with fertilizers and herbicides to avoid injury and promote vigorous growth will aid in good stand establishment.

Blight of cotton (also called Angular Leaf Spot) caused by Xanthomonas axonopodis pv. malvacearum is an important bacterial disease. Foliar symptoms consist of dark brown to black, angular leaf spots (Fig. 1) that may progress along major leaf veins (Fig. 2). As the disease progresses, petioles and stems may become infected, develop black cankers that girdle the petiole or stem and result in premature defoliation. Bolls may also become infected causing boll rots that discolor lint, and rot seeds. Infected bolls have round (non-angular), dark brown to black lesions that may appear water soaked. Environmental conditions that favor disease are high temperatures (86 to 97 °F) and high humidity (>85%). Bacterial blight can be seed transmitted, thus good management begins with using high quality, acid delinted, disease free seed. Fields with bacterial blight should not be cultivated when foliage is wet to minimize spread of the disease. Shredding stalks and incorporating crop residue into the soil after harvest can reduce overwinter survival of the pathogen on crop debris. Fields with documented bacterial blight should be planted with a blight-resistant cultivar the following year or rotated with a non-host crop like corn, grain sorghum, peanut, and soybean. 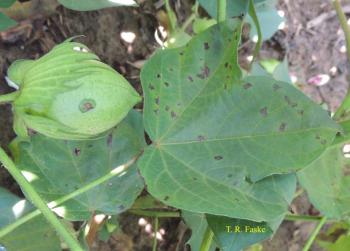 Figure 1. Bacterial blight of cotton on leaf and cotton boll. 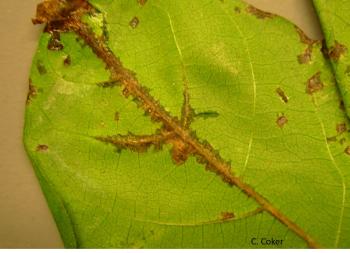 In contrast with cotton production areas in the southeastern states where target spot (caused by Corynespora) can be of economic importance, typically, fungal leaf spots of cotton (Fig. 3) are minor diseases in Arkansas and rarely require a remedial action especially when they occur late in the season. Leaf spots are commonly observed when the cotton plant begins to flower as nutrients like potassium move from leaves to developing bolls. Nutrient deficient leaves are susceptible to relatively weak fungal pathogens that can cause leaf spots. Cercospora Leaf Spot and Stemphyllium Leaf Spot are appear similar to one another and cause brown or gray spots with reddish-purple margins. Alternaria Leaf Spot lesion has a targeted pattern and typically forms in the lower canopy. Alternaria Leaf Spot can be confused with Corynespora Leaf Spot, so accurate diagnosis of the disease by the Plant Disease Clinic may be necessary. Fungicides for leaf spot control have not been shown to improve yield in Arkansas. Following recommended nutrient requirements for healthy cotton production is usually sufficient to manage fungal leaf spot of cotton. 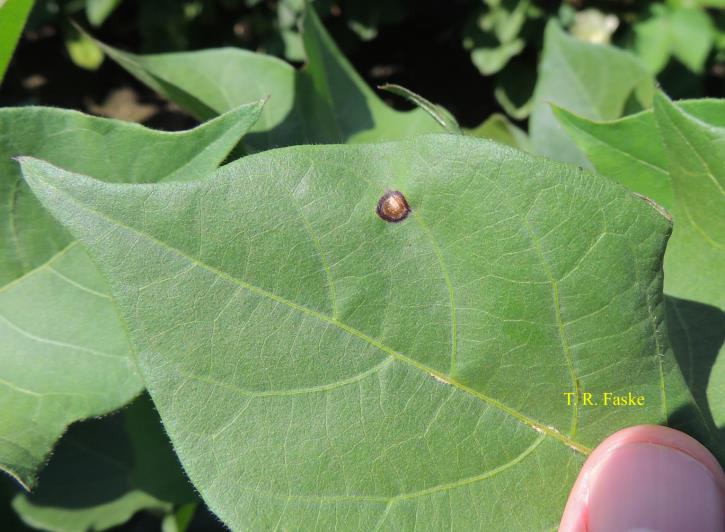 Corynespora leaf spot has been detected in several commercial cotton fields on a few varieties (FM 1944, ST 5458, and PHY 499) in Craighead, Mississippi, Poinsett, and Woodruff counties. This disease has been reported in Alabama, Georgia, Louisiana, Mississippi, and other southeastern cotton producing states, but until now it has not been a concern for Arkansas cotton producers. The disease likely went unnoticed in 2012 due to dry conditions, but frequent rain events in the state this year provided ideal conditions for disease development. Thus, it is likely Corynespora leaf spot is present in other cotton producing counties and on other cotton varieties. Yield losses have been reported in other states when the disease occurs early in the season (at bloom) causing a significant amount of defoliation. Thus, it is unlikely to cause any significant yield loss when the disease develops on cotton that is close to cut-out.

Corynespora leaf spot or target spot is caused the fungus Corynespora cassiicola, which causes leaf spots on cucumber, sweet potato, soybean, tomato and cotton. On cotton, it begins a small brick-red spot which then leads to the formation of large (1/4 to 1in. in diam.) circular to irregular shaped spots with the typical target pattern (Fig. 1). Infection commonly occurs in the lower canopy and causes premature defoliation when disease severity is high with several lesions (20+ spots/leaf) per leaf (Fig. 2 & 3). Several other pathogens like Cercospora spp. Stemphyllium spp. or Alternaria spp. cause leaf spots on cotton in the state (Fig. 4). These commonly produce smaller lesions with reddish to purplish margin (Fig. 4). When scouting for Corynespora leaf spot inspect lower leaves in dense canopy for larger than normal leaf spots with a target-pattern. It is unknown how widespread this disease is occurring and positive identifications can be reported to tfaske@uada.edu. Questionable samples should be sent the Plant Health Clinic in Fayetteville, AR. 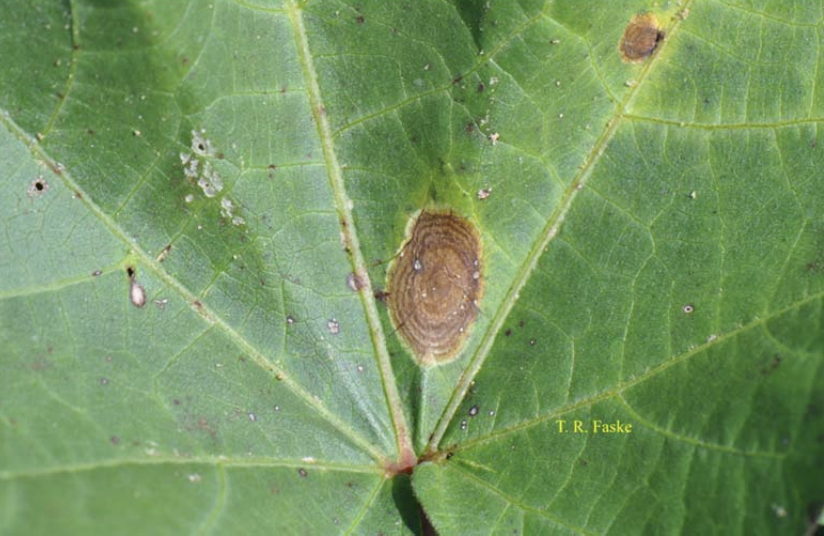 Figure 1. Mature and developing leaf spot by Corynespora cassiicola on a cotton leaf. 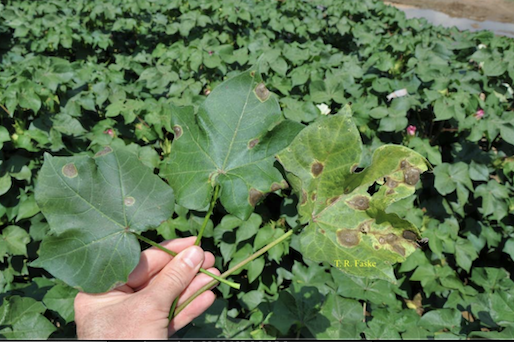 Figure 2. Various levels of disease severity within the cotton plant canopy. The leaf with highest number of lesions was closest to soil line (close to defoliation) and leaf with fewest lesions was approximately two feet above soil line in the mid-canopy. 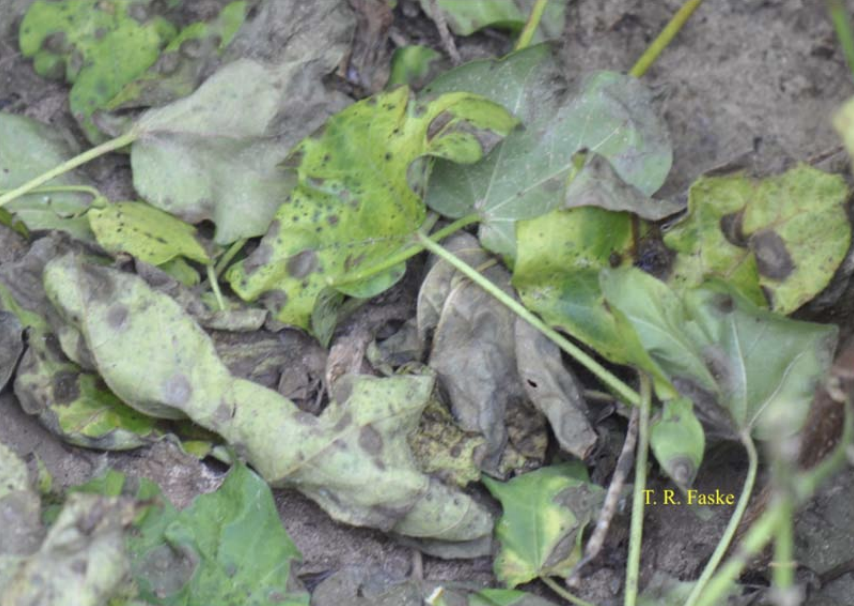 A few fields in Craighead County had 10% defoliation in the lower canopy in areas of the field with the highest disease severity. This is unlikely to cause any yield loss given that disease development began late in the season and cotton is close to cut-out. A higher percentage (50%) of defoliation was noticed by consultants in other fields, which may contribute to a loss in yield. Significant yield losses (100 to 200 lb/ac lint) have been reported in Alabama and Georgia where Corynespora leaf spot occurs early (at bloom) and causes significant defoliation. Some cotton varieties like PHY 499 are more susceptible to Corynespora leaf spot than DP 1050, but more studies are needed to compare susceptibility among other cotton varieties grown in the state. Two applications of fungicides like Headline (pyraclastrobin), Quadris (azoxystrobin), and Twinline (pyraclastrobin + metconazole) have been somewhat effective at suppressing Corynespora leaf spot development, but do not consistently result in a significant effect on yield. The most effective fungicide timing has been at the 1st and 3rd week of bloom when leaf spot was observed at bloom in the field. Fungicides applied at 5th and 7th wk of bloom or on-demand (when leaf spot was first observed then 2 wk. later) were similar in effectiveness to the early fungicide application. A single fungicide application late in the season (5th or 6th wk of bloom) among a few trials in Georgia provided similar disease suppression and yield gain compared to two fungicide applications. Thus, a single application of a fungicide late in the season may limit some defoliation in mid and upper canopy, but unlikely to consistently increase yield on all varieties. Further studies are needed in the state to determine the effect of fungicide timing on leaf spot suppression, yield, and economics of applying one or two fungicides on cotton. Finally, field with rows oriented with the prevailing wind seemed to promote evaporation in the lower canopy thus minimizing leaf spot development.

Two vascular wilts occur in Arkansas.  Fusarium wilt is caused by Fusarium oxysporum, and Verticillium wilt is caused by Verticillium dahlia. Both pathogens can survive for several years in cotton fields, and both cause a browning and discoloration of the vascular tissue of infected cotton plants. Thus, a laboratory diagnosis is needed to determine the fungal pathogen.

Fusarium wilt can occur at any time during cotton development depending on environmental conditions and host susceptibility. The vascular system of symptomatic plants is dark brown (Fig. 4). Infection generally results in the death of the plant, and foliar symptoms can resemble severe potassium deficiency.  Fusarium wilt most commonly occurs at warm temperatures (86 to 90°F) and a pH of 5.0 to 6.5. In Arkansas, Fusarium wilt is generally associated with the presence of the root-knot nematode, and wilt severity and yield loss are highest in fields with a history of Fusarium wilt and root-knot nematodes. Some cotton cultivars are available that are resistant or tolerant to Fusarium wilt, although where root-knot nematodes are severe, wilt resistance may not be fully expressed.

Verticillium wilt can also survive for several years in cotton fields. This disease often occurs during the last 1/3 of the growing season, especially when the growing season is cooler and wetter than normal. Similar to Fusarium wilt, the vascular system of symptomatic plants is dark brown, thus a laboratory assay is needed to accurately identify wilt fungi. Verticillium wilt commonly occurs when soil temperatures are somewhat cool (75 to 82°F), and a pH of greater than 6.0. Verticillium wilt is not associated with or enhanced by the presence of nematodes. High nitrogen levels or potassium deficiencies tend to increase disease severity. Cotton cultivars with tolerance to Verticillium wilt are available, but no highly resistant cultivars are available. Management of the crop for earliness, avoiding excessive planting density, and optimizing plant nutrition will aid in minimizing losses due to Verticillium wilt. 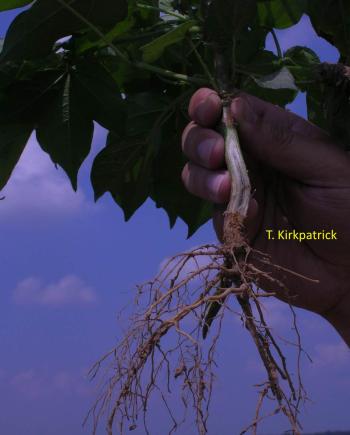 Cotton boll rot occurs when certain fungi and bacteria cause damage to bolls, lint, and seed. Though the frequency of boll rots varies from season to season it is most commonly associated with cool wet weather, rank growth, and boll injury. Though cultural practices can help reduce boll rot potential no single practice will give satisfactory control.  Plant growth management practices that minimize boll rots include avoiding excessive nitrogen rates and using growth regulators to shorten plant height. Seeding rates that allow establishment of optimum stands (2 to 3 plants per foot of row), wide row spacing (38 inches), careful use of late-season irrigation, and adequate insect control all will help minimize boll rot. No fungicide or bactericide has been shown to be economically effective to minimize boll rots