This report concludes the 5-year evaluation for this set of plants.

The three test sites are the Hope Research Center (USDA cold hardiness zone 8), the Little Rock/Cammack property (zone 7a), and the Fayetteville Horticulture Research farm (zone 6b). As much as possible the three test sites were prepared in a similar manner. Full sun plants were grown in row-type beds 3' wide with a 7' grass alley. Plant groups are planted together (i.e. trees are planted together). Trees are spaced 10' apart, shrubs 6' apart and herbaceous perennials 4' apart. Little Rock site was planted on April 21, 2000; Fayetteville was planted on April 27, 2000; Hope planted on April 20, 2000. Plants at all three sites are irrigated as needed using drip tape. Plants were fertilized and mulched after planting. Post-emergent herbicides were used at all three test sites. No disease or insect control was implemented in 2002. The Acer and Eucommia were pruned following final growth measurements to establish a tree-like habit. Pruning consisted of removing the bottom 1/3 of limbs. Shrubs are NOT pruned. Final growth measurements were taken at LittleF

Plants at the Little Rock site do receive a few hours of shade generally during the morning hours. Fayetteville and Hope are very exposed, full sun sites. The Fayetteville site is characterized by consistent winds.

Weather for 2004 at all three test sites is summarized 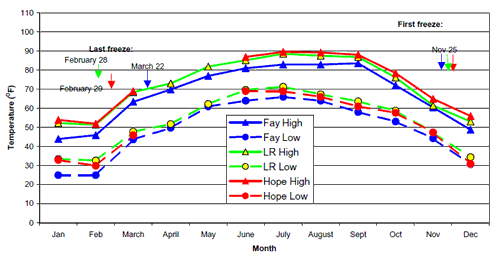 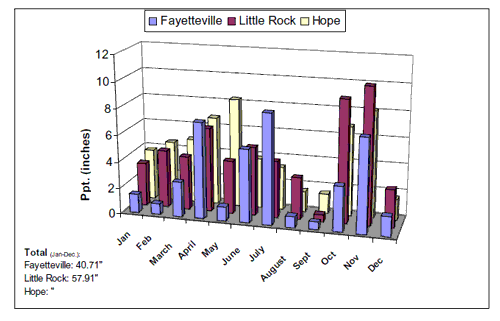 Flowerwood Nursery donated 3-gal plants. The winter of 00/01 proved to be a good test for this plant. Both cultivars of Indian hawthorn suffered severely at Fayetteville (USDA zone 6b) and all are dead, but are growing well at Hope and Little Rock. Peak flowering is typically in late April and lasts for several weeks. Flower color is a very soft pink. Flowers tend to be nestled in the foliage more so than Olivia™. The blue-black fruit which is formed in the fall is held on the plant until early spring. In contrast to Olivia™, winter leaf color on Eleanor Taber™ is green. Average plant size at Little Rock and Hope is 34" tall by 66" wide. The habit on Eleanor Taber™ is tighter than on Olivia™.

Flowerwood Nursery donated 3-gal plants. Based on mortality at Fayetteville (all three Olivia™ dead; all 1999 planted

Breeze dead; one Eleanor Taber™ alive) one might conclude that Eleanor Taber™  is slightly more cold tolerant than Olivia™ and Bay Breeze™. Regardless, Rhaphiolepsis are not suitable for use in Fayetteville.

Flowering period in Little Rock was nearly identical to the above except that a significant re-bloom was noted in August through September. Flower color is pure white. Leaves on Olivia™ are distinctly different from Eleanor Taber™. Leaves on Olivia™ are almost round (rounded-ovate) and slightly coarser than Eleanor Taber™. Average plant size at Little Rock and Hope is 37" tall by 67" wide.

Flowerwood Nursery donated 3-gal plants. Again, the 00/01 winter was a great test winter for broadleaf evergreens including Ternstroemia. All three plants were killed at Fayetteville.

Plants at Little Rock grew more upright while those at Hope grew more in a rounded habit. Plants displayed a beautiful burgundy color in the outer most foliage in late fall. Average plant size at Little Rock is 125" tall by 73" wide.

One-gallon plants were purchased from Pine Ridge Nursery, London, AR. This plant is a real dilemma for the program. Plants are growing very vertical and would benefit from being severely cut back to encourage more branching, however, protocol for the trial does not allow for intervention pruning except for trees. We also feel that this plant would benefit from at least partial shade in Arkansas.

All three plants died at Fayetteville and two of the three have died at Hope. Remaining plants at Little Rock and Hope are growing very well in year #5. Flowers, which are obviously not showy, began to appear at Little Rock in mid-June and continued sporadically for the next 2 months. Average plant size in Little Rock and Hope is 70" tall by 77" wide. Again, our plants would have benefited from heading back the single central leader in the first year but this is not allowed in our program.

One-gallon plants were initiated at U of A by cutting propagation from a plant purchased from Arborvillage, Holt, MO. Plants continue to grow well at all three sites, but 2004 was perhaps the worst year for plants growing in Fayetteville. Drought in July and August caused premature defoliation on this cultivar. Flowering at all three locationsbegan in late May and continued through mid July. The flower display is slightly showy. Fall color at Hope and Little Rock is non existent probably as a result of our intense summer heat. Foliage becomes sparse in September as a result of some unidentified leaf spot. Plants I observed in Oregon in late August displayed exceptional burgundy/red fall color. Average plant size statewide is 58" tall by 102" wide.

One-quart plants originated from U of A cutting propagation from a plant purchased from Wilkerson Mill Gardens, Palmetto, GA. Growth rate was greatest at Little Rock and least at Hope. Plants in Fayetteville were killed to the ground during the 00-01 winter, but new growth emerged from the base of the plant. Flowers were not observed at any location in 2004. The plant, with very small fine textured leaves, averages statewide 38" tall by 84" wide. Plant habit looks very much like a cranberry cotoneaster without the bright red fruits. Plant texture is very fine. Many plants continue to lose leaves in the center of the plant resulting in a less than desirable appearance. In general, we still like this plant for use in warmer parts of Arkansas.

North Carolina State University donated one-quart plants. Janet Carson had seen this plant used extensively during a visit to Raleigh in 1999. All nine plants were surprisingly killed during the winter of 00/01.

Bailey Nursery donated bare-root plants. Plants continue to grow at a very rapid pace. Due to a planting error on our part we had to move two plants from Hope to Little Rock rather late in 2000. This procedure set two of the three Little Rock plants back severely, and contributed to the death of one plant. Average plant size statewide is 49" tall by 118" wide. Plants in Little Rock and Fayetteville flowered in early to mid April. Fall color is almost non-existent at Hope and Little Rock. Again, we suspect that, like Diervilla, better fall color develops the further north this plant is used.

One-quart plants originated from U of A cutting propagation from a plant purchased from Wilkerson Mill Gardens, Palmetto, GA. The plant was a recommendation by Ewa Nelson, Morningside Nursery. I have been impressed with its glossy foliage, nice flower display, and tight plant habit.

All three plants died at Fayetteville and two have died at Hope. However, it should be noted that larger plants, not in the official trial, that are planted on the Fayetteville campus did survive the winter of 00/01. Flowering began at Little Rock in early-April and lasted for 2-3 weeks. Average plant size at Little Rock and Hope is 49" tall by 73" wide.

The plant is not proving to be a winner at any of the three sites. Plant habit is not as tight as expected and we have observed dieback possibly related to our summer heat. Flowering began in Little Rock on March 24 and in Fayetteville on March 30. In Little Rock, the flowers lasted until mid April while in Fayetteville the display lasted one week. Flowers are malodorous.Average plant size statewide is 74" tall by 81" wide. Our initial hope was that this would be a good deciduous hedge plant for Arkansas but based on its shape and performance we now question that idea.

One-gallon plants originated from U of A cutting propagation. The source plant was from Woodlanders Nursery, Aiken, SC. This species is one of the parents of Abelia × grandiflora. Plants are growing very well at all three sites.

The flower display is very noteworthy. The white or very soft pink flowers appear in late June and continued through at least late August. Attractive soft pink calyxes followed the flowers giving the impression that the plant is still in bloom. This lasts until a very hard freeze. It is hard to separate the overall effect of the flowers and the pink calyx. Flowering began in Little Rock on June 12 and continued for at least several months. In Fayetteville, the plants had been killed to the ground during the winter of 00/01 but have recovered nicely. Average plant size statewide is 77" tall by 96" wide.

J. Frank Schmidt Nurseryy donated one-gallon plants. All three plants died at Fayetteville during 2001. Trees in Hope and Little Rock grew exceptionally well. An unusual thing happened in Little Rock in August 2002. Some animal, probably squirrels, began feeding on the trunk and lateral branch bark. In some cases the entire trunk was girdled but the shoot showed no wilting symptoms. What is amazing is that in our random plots the animal picked out every trident maple tree.

J. Frank Schmidt Nursery donated bare-root trees (4-5' BR). The tree is finally starting to establish itself at Little Rock and Fayetteville but is struggling at Hope. It flowered for the first time in Fayetteville in early April, but the flowers are not ornamentally significant. We will likely not recommend this tree for Arkansas landscapes. Average tree height statewide is 152" with a trunk caliper (at 6") of 3".

The Ornamentals team would like to express their sincere appreciation to the cooperating nurseries (J. Frank Schmidt Nursery, Bailey Nursery, and Flowerwood Nursery) for donating the plants for this season's trial and to the Arkansas Green Industry Association for financial support.