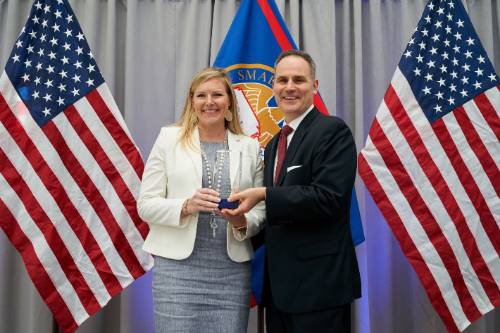 An Arkansas PTAC client has been recognized as the 2019 Small Business Person of the Year for Arkansas.

The U. S. Small Business Administration (SBA) announced winners in March from the 50 states, the District of Columbia, Puerto Rico, and Guam.

April Broderick, majority owner/president of A&A Fire and Safety Company in Sherwood, was nominated and chosen as the Arkansas award recipient.

Broderick has been an Arkansas Procurement Technical Assistance Center client since 2016 and has received numerous government contracts since becoming a client. The most recent award was in February 2019.

Broderick was invited and attended ceremonies in Washington, D.C. during National Small Business Week on May 5-6 where she was honored with her award. She was also recognized locally in Little Rock on May 14. The awards go to small business owners who represent the nation’s strong entrepreneurial spirit and rich diversity.

Nominees for this award must meet the following eligibility requirements:

There are 30 million small businesses nationwide. We feel that this is such a respectable honor for Broderick to be among the nation’s top small businesses. Congratulations to Broderick and A&A on this milestone.

If you would like to nominate a business in the future, you must hand deliver or mail the nomination to the U.S. Small Business Administration district office in the state or territory where the nominee is located.  Self-nominations are allowed.  Nomination forms can be found here: www.sba.gov/sites/default/files/2018-08/3301_-_Small_Business_Person_of_the_Year_Nomination_Form_Final_508.pdf

Connect with our Arkansas PTAC counselors at 501-671-2390 to learn how you can expand your business into new areas.