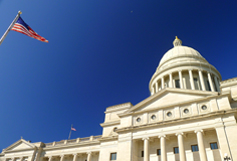 Voters approved extending Arkansas' legislative term limits in 2014. People have been trying to change the law ever since.

The Arkansas Senate voted Tuesday, March 26 to refer a term limits amendment to voters in 2020, a few weeks after a ballot issue group notified the Secretary of State's Office that they would be circulating a petition for a citizen-initiated amendment on term limits.

Before it can be on the 2020 ballot, Senate proposal SJR15 needs to make it through the House of Representatives. That does not appear to be an issue. In recent years, the House has signed off on Senate proposals and vice versa. (The General Assembly has the authority to refer 3 ballot issues to voters).

Before it can be on the 2020 ballot, the citizen-initiated proposal needs to have the support of more than 89,000 voters whose signatures pass muster with the Secretary of State's review process. The proposal's ballot title also has to be certified by the Arkansas Board of Election Commissioners.

Arkansas Term Limits has tried several times since 2014 to put its proposal before voters. In 2018, they submitted tens of thousands of voter signatures only to see their constitutional amendment struck from the ballot by the Arkansas Supreme Court just ahead of Election Day in Zook v. Martin.

Since the passage of Amendment 94 in 2014, the group has been trying to reduce the number of years state legislators can serve in office via the ballot because they felt the legislature's amendment mislead voters. The ballot title said it would be "setting" term limits.

The sponsor of the Senate proposal has said he was trying to settle the state's term limit laws once and for all. Sen. Alan Clark's original proposal would have prevented anyone but the legislature from changing term limits in the future, but that section was dropped before Tuesday's vote.

"If we don't do this, we leave the door open for someone else to gut state government, particularly the people's branch," Clark was quoted in an Arkansas Democrat-Gazette article on Tuesday's vote.

SJR15 is on the Friday agenda for the House Committee on State Agencies and Governmental Affairs.

History of Term Limits in Arkansas

Term limits have been on the Arkansas ballot three times over the past 30 years.