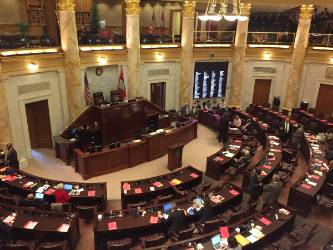 The Arkansas Capitol will be a busy place Monday, Jan. 14 with the start of Arkansas' 92nd General Assembly.

Senators and representatives from around the state will start deliberations on new laws and policy changes. This is also the time when legislators file their proposed constitutional amendments for the 2020 ballot.

The Arkansas Constitution limits legislators to three proposals, which are supposed to be related to a single subject. Many recent proposals have had multiple constitutional changes but were centered around a single theme. Some of this can be traced back to dozens of proposals being filed and legislators whittling them down and combining them when possible.

We start every session with the same question: How many proposals will be filed this year? In past years, years lawmakers started out saying they wouldn't refer any proposals, only for the session to end with three amendments.

A few legislators have taken advantage of early bill filing and have already submitted constitutional amendments for consideration. The proposals are:

The amendment passed by a vote of 648,122 (62.83%) in favor and 383,467 (37.17%) against. To change Amendment 86 to eliminate the fiscal session, either the legislature or the public would have to refer a constitutional amendment to the public. (Arkansas is one of 18 states where citizens can use a ballot initiative process to refer constitutional amendments to voters. Read more about what different states require.)

By this time next year, we will know what amendments will be on the 2020 ballot from the legislature. In addition to the proposals above, there seems to be perennial interest in proposals related to financing road construction, changes to the citizen-initiative ballot process, changes to how Arkansas Supreme Court judges are chosen, limits on lawsuit awards and court rules, public education, and the status of independent state agencies.

Here are some ways you can keep up with legislative action in real time.

1. Look up recently filed bills. You can search by day or number.

4. Watch the Senate live. There has been an effort to add video, but if that doesn't work, they have streamed audio in the past.

5. Watch the House of Representatives live.

6. Set up a personalized bill tracking account. Did you find a bill that interests you? You can get daily or weekly updates on what's happening with the legislation.

8. Read the news releases from the Arkansas Senate and House of Representatives.