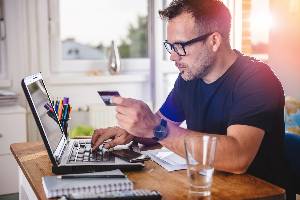 Many online shoppers purchase everyday
goods online such as paper towels and food.

It all started when I noticed that he lugs two recycling bins to the curb every Tuesday, and the rest of us have only one. Why would anyone need two recycling bins? Then I noticed the stream of UPS and Fedex trucks dropping off packages at all times of the day, and his wi-fi network that pops up whenever I go on-line, usually at night. Finally, it struck me – my neighbor probably has Amazon Prime (or some other on-line shopping site) that offers free delivery within two days, and he SHOPS IN HIS PAJAMAS, just before he crashes for the night. (I have not asked, as to do so would be unseemly).

That would explain the two recycling bins full of dismantled cardboard boxes and the delivery truck traffic. So I tried it the other night (in my pajamas). It took me 6 minutes to order a book, and I saved $4 because I ordered a used book and the 45 minutes it would have taken for a trip to the nearest bookstore.

Pondering the implications of this, I discovered that over 80 million people subscribe to Amazon Prime (DOUBLE what it had 2 two years ago and OVER HALF of U.S. households). Many people set their Amazon Prime account to automatically order items like toilet paper and paper towels. At two people per household, that is 160 million people that make fewer trips to local stores, less revenue for local retailers, reduced local government tax revenue, and vacant buildings downtown.

According to CIRP, the average Prime member spends about $1,300 on Amazon per year, nearly double the estimated $700 spent by non-Prime members. Furthermore, since 2000, e-commerce sales have increased to over $100 billion while department store sales have decreased to less than $40 billion.

Speaking of vacant buildings, I recently visited a college town on an interstate highway with a population of over 9,000 people and over 20 vacant buildings downtown. Clearly the community used to have a thriving downtown. But times have changed, and the 21st century economy has not been kind to it. Community leaders described over 20 things to do in or near the community, with one individual stating that there were 50.

When I checked the community on TripAdvisor.com, the world’s largest travel site with 500 million+ traveler reviews, I discovered that there are THREE things to do in or near the community. 286 million people in America use the internet, and many look for things to do while traveling. If they see only three things to do in your community, they are unlikely to stop.

The traffic count on the interstate which goes through this community is 27,000 vehicles per day. If just 1% (2,700 vehicles) saw there were more things to do in this community and stopped, do you think they would have over 20 vacant buildings? The irony is that, while interstate billboards are very expensive, Trip Advisor is a billboard on the internet superhighway and it is free.

Broadband is so crucial to life in the 21st century that people in remote areas of Asia climb trees to get a cell or broadband signal. They are now working while hanging in trees.

In the face of these powerful forces, what are the breakthrough strategies we need to re-imagine our communities and regions to attract tourists, millennials, families, retirees, and businesses? On June 7-8, the 2017 Breakthrough Solutions Conference will take place in Little Rock with the theme “Re-Imagining Your Community / Region in the 21st Century Economy.” If you want to learn how to harness the winds of change, please join us to hear 28 speakers share their insights and success stories in the 21st century economy. Go to www.uaex.uada.edu/breakthrough-solutions.

Dr. Mark Peterson is a Professor of Community and Economic Development with the University of Arkansas Cooperative Extension Service, and can be reached at mpeterson@uada.edu.